THE ROOSTER OF BARCELOS 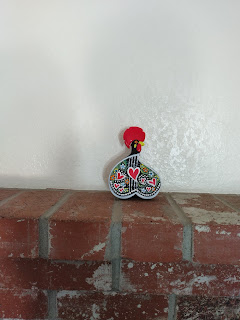 This cute little fella was a gift from a friend we made at a bar/restaurant in the Burgus Tribute and Design Hotel in Braga. We often walked there to have a glass of wine and a bowl of some of the most delicious pistachios ever and chat with the wait staff, Sara and Ricardo. Burgus also makes delicious omelets and a few times we had dinner there. The evenng before we left Braga, we walked again to Burgus to say goodbye. Sara wasn't in, but left this rooster with Ricardo as goodbye gift, and while I have it on the mantelpiece now in our furnitureless livingroom, eventually it will have pride of place on a special shelf when our shipping arrives.

The Rooster of Barcelos is a famous folk tale in Portugal, and thanks to its fame, in almost any tourist shop, you can find dishtowels, potholders, statuettes, refrigerator magnets, whatever, all imprinted with the rooster. It has become an icon or symbol in Portugal.

Here is the folk tale: There are varying versions, but they all add up to the same story: (It is also told by one of the characters in my new mystery, Deadly Verse.)

A man was passing through Barcelos, and stayed at an inn. In some versions, he is a Galician pilgrim on a pilgrimage to Santiago de Compostelo. In Barcelos, some silver was stolen, and the pilgrim - a stranger in town - became the suspect. He was arrested and condemned to hang. But he begged to be taken to the judge, and it so happened the judge was getting ready to eat a cooked rooster. The pilgrim, protesting his innocense, told the judge that the moment he was hung the dead rooster would begin to crow. Well, the judge lost his appetite, but didn't change the verdict. And, as the pilgrim predicted, the moment he was hung, the rooster stood up and began to crow. This made the judge realize his error, and he rushed to the gallows. As luck would have it, the noose had been tied with a defective knot and the pilgrim didn't hang after all.

You may wonder about the strange shape of the rooster statue in this picture. It's in the shape of a Portuguese guitar, because Sara knows how much Rajan and I both love Fado, that distictive Portuguese song form like no other. In traditional Fado, the singer is accompanies by two musicians, one on acoustic guitar and one on Portuguese guitar. The Portuguese guitar has a distinctive sound similar to the sound of the strings on a Greek bouzouki, which we also love.) So this little guy has a double pleasure and sentimental value for us.

Speaking of music, Monday evening we met our friends Alice and Bill at the Fox & Goose to hear some great playing (and singing). It was open mic night, hosted by two fabulous guitar players who took us back to music of the 60s & 70s, bluegrass, country western, blues, folk, folk rock. Other people often come to sing and play, too. The woman you see in the photo on the right sings and plays a terrific violin. 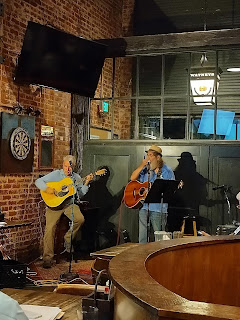 How about you? Do you have any favorite folk tales to share? Do you have a favorite kind of music you like to listen to? Is there an open mic evening in your area?

Posted by Elizabeth Varadan, Author at 9:32 AM

What a wonderful and meaningful gift to receive. I am not at all surprised that it will have a place of pride when you can fully set up your new home.

E. C., yes, it's very special. It will keep so many memories flourishing for a long, long time. Thanks for topping by.

So charming! Your tales of your life abroad are always fascinating. And I too love fado.

Hi, Vicki, Ah, Fado! It's such a different song form, but, (to us) so wonderful.

What a lovely gift and a forever memory.

Good morning, Sandra. Indeed it is. I have such lovely memories of Braga, and this is one of the most special. Thanks for stopping by.

So much charm. Thank you for sharing, especially the pictorials :)

Thanks for stopping by, Mirka. I'm glad you liked the pictures. The musicians really took me back to the 60s. This is our new favorite Monday evening hangout.