The Town of Toro - Part Two 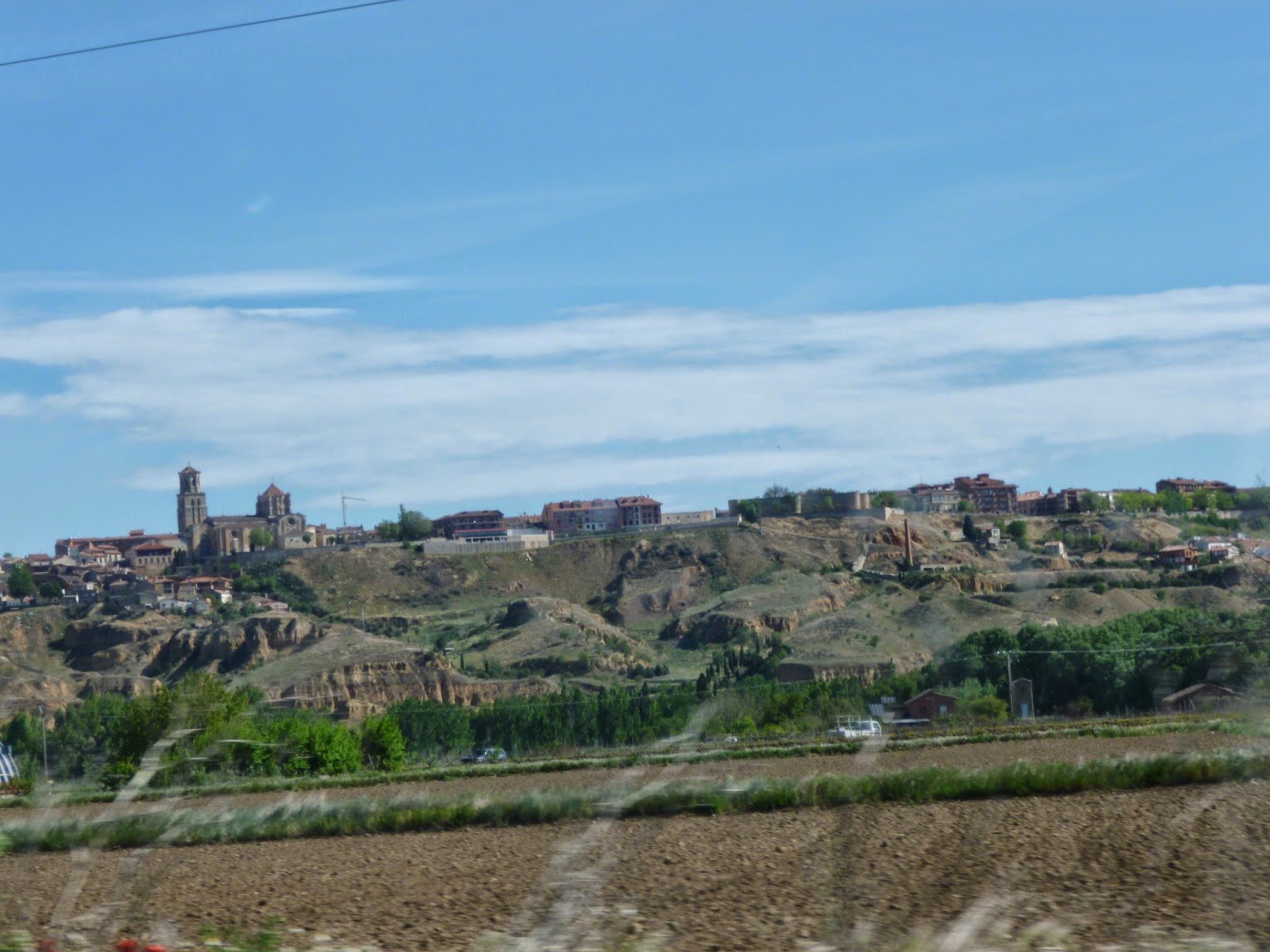 Originally we had planned to spend all three days, Saturday, Sunday, and Monday in Salamanca and return Monday afternoon. But the desk clerk advised us that on Monday everything would be closed. So we decided to go to Toro that day instead.

Toro is an unbelievably beautiful municipality in the province of Zamora, part of the autonomous community of Castille-Leon. It's high above a fertile plain known for its wines (from the Tempranillo grape), and recently Rajan has gotten interested in Toro wines, so that was also part of the inspiration for the trip. You can see how the buildings beckon one from afar. 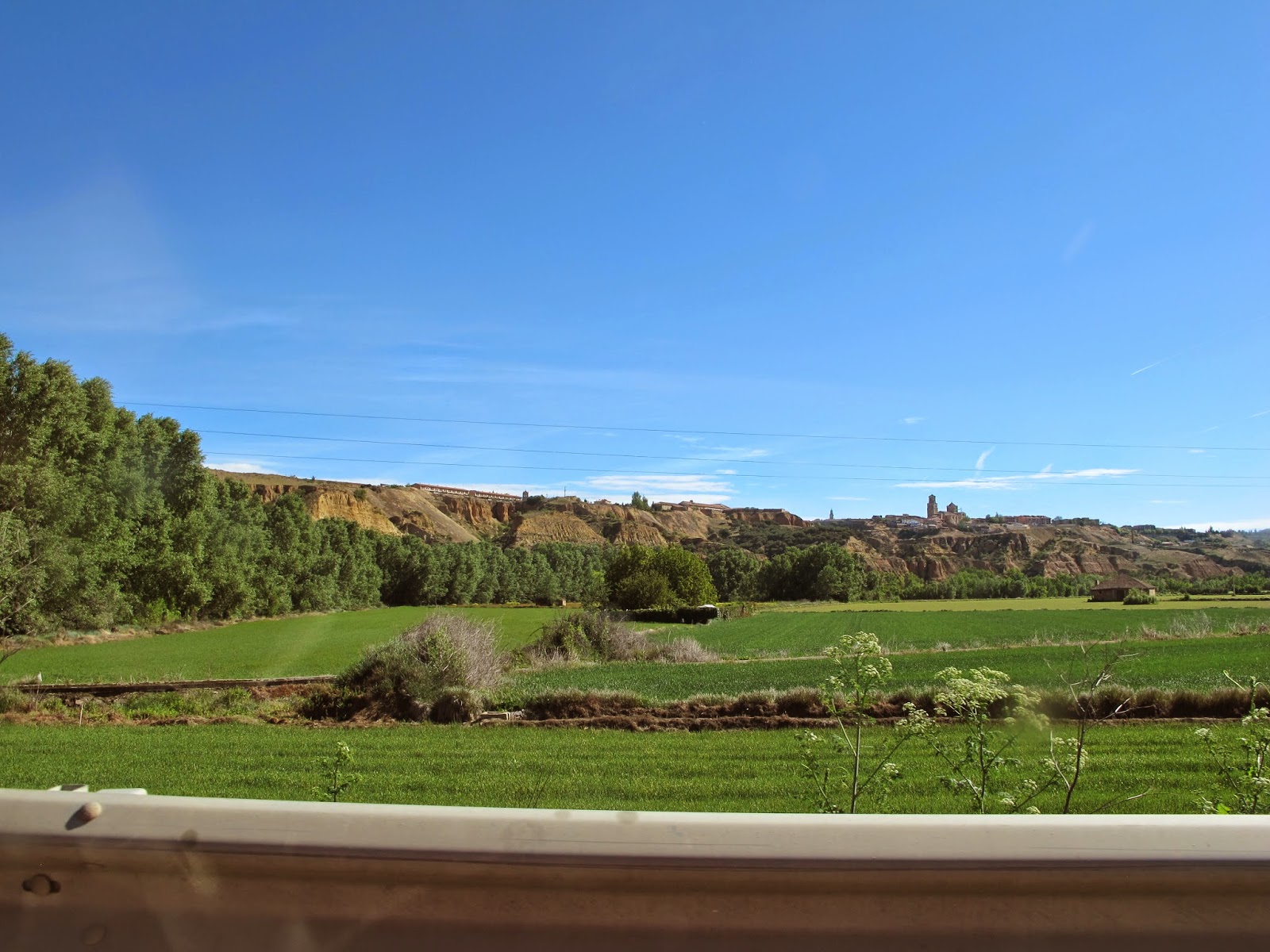 This is the kind of country we traveled through to get there. Beautiful, and lush and green. Appartently a lot of farming goes on in this region. But the Toro region is becoming more and more known for its wines. When we arrived and parked, we started walking around and one of the first areas of interest we came to was an overlook point with a plaza around an old, intact wall enclosing a rectangular area with round towers at various points. A gardener told me was from Roman times. (My Spanish is still limited, so I couldn't really learn much more from him than that.) Here it is:

From the enclosure's condition, it may actually be from a later date. I looked Toro up in Wikipedia, and Toro was once a Roman town. The article mentions remains of a wall going back to 910, but, as you can see here, this is far more than "remains."

Since battles took place in Toro between heirs vying for the Spanish throne, this might actually have been a fortress. Plaques mentioned the crowning of King Ferdinand III in 1230, and that Isabella I of Castille defeated Juana La Beltraneja there, and that her father, Juan II of Castille, was born in Toro in 1404. But if anyone else can find out more for me about the structure itself, I'd appreciate the information. (Isabella I, by the way, was the Isabella who married Ferdinand II of Aragon, and they are the famous couple behind the Inquisition in Spain and the financing of Columbus's voyage to what became known in Europe as "the New World.")


Since it really is a grand look-out point, Rajan and I took tons of pictures of the vast plains and the Rio Duero below. (The Rio Duero cuts through northern and Central Spain and flows on south to become the Rio Douro in Portugal, which ends at Porto.) Here are a couple.


Here is a video he took that I think you will enjoy:


Then we all wandered around the beautiful city, admiring the architecture and the color of the buildings. Here are some pictures of a church that is considered a "must see" in Toro, Collegiate church of Santa María la Mayor.

One of the wine shops was open and the man inside was very knowledgeable about wines and wineries from the region. He spoke in Spanish, and we could understand most of what he said, but luckily our friends David and Terri are quite fluent, and so they were able to tell us whatever we missed. There are a number of wineries all around, but, again, most of them were closed. Still, it's good information for the future, and we bought some wine from the shop.

Meanwhile, the town was bustling with people out and about. I saw a beautiful arch at one end of a street, and a woman told me that it had been made with wine. Seriously. I think what she meant was that wine was mixed with the clay instead of water. But what a unique feature! She also tole me there was another arch at the other end of town, so of course I had to go there.

After that, it seemed time to go, as there was a long drive home to Galicia and our part of Galicia. But it was a day well spent, and we were so glad that we had decided to take this little side trip on such a beautiful day.

I  hope you enjoyed this little peek into this area of Spain. The next posts will still be about the earlier weeks in Galicia, before our trip to Braga, Portugal; and then I will follow up with pictures and posts about Braga, a most remarkable and wonderful city.

Posted by Elizabeth Varadan, Author at 12:40 AM 22 comments:

The Week-end in Salamanca, and a Town Named Toro - Part One

Already it has been two weeks since our return from Salamanca, and even then, we returned via a different town in the Toro wine region, called, aptly, Toro. But first, the beautiful city of Salamanca in the province of Salamanca, which is in Castilla y León, one of the seventeen autonomous coummunities in Spain.

Here you see the old part of town, across the Puente Romano (Roman Bridge), the buildings eternally glowing a soft apricot/rose/peach from the soil and clay from the area.

The trip was to celebrate with our friends, Terri and David, our mutual 40th anniversary. Ours was on December 22nd, and theirs was on February 15th. We had agreed a few years ago that when the 40th came, we'd go to some special place during the spring trip to Galicia. Salamanca was a good choice.

We left on Saturday and spent two days in this beautiful city. What you see in the foreground, across the Puente Romana,  are the domes of the New Cathedral (new meaning it was built between the 16th and 18th centuries—in two different styles, Gothic and Baroque.) In the background are the La Clerecía Towers, domes of a church and ecclesiastic college begun in the 17th century. (More about the latter later, including a neat video of storks that make their home atop the Cathedral.)


But first, of course, we had to get there. It's about a four and a half drive to Salamanca from our area, and you go through some gorgeous scenery, leaving the stone walls and red tile roofs and the terraced vineyards of this area and encountering rose and ochre brick and stone walls of the villages nearer Salamanca and vineyards in rocky flat soil—soil that the vines seem to like: We've been told the harsher the soil, the better the wine.


We passed hills striped with purple heather and golden gorse and some bright yellow fields of rape blossoms grown for rape seed oil. At times it was like a painting by Cezanne. Red tile roofs changed to black slate in one area, and we saw milky white cows that, at first, we thought were sheep (we are so used to the golden brown cows herded by our Galician neighbors.)

The first day in Salamanca we wandered around, enjoying shops, the cathedral and university and seminary buildings. And walking along the beautiful Puente Romano.


We spent a lot of time at a wonderful museum called, Art Nouveau and Art Deco Museum, housed in the Casa Lis. Originally a small "palace" (from the brochure), built in the early 20th century for Don Miguel de Lis, an aficionado of Art Nouveau, it later became the current museum that now houses statues, statuettes, furniture, stained glass artwork, dolls, paintings, all by leading artists and artisans of the genre. It's a remarkable building with one whole wall of stained glass windows on two floors, a hallway with a stained glass ceiling, and beautiful architecture and gardens and gatework outside.

There were weddings going on in the city, so one of the restaurants Terri and David wanted to take us to was all booked up. We did have a wonderful lunch of raciónes at a convivial cafe called Erasmus , enjoying bacaloa (cod) croquettes,  gambas gabardines (deep-fried battered shrimp), and pimientos de padrón, small green pimientos sautéed in olive oil and sea salt, and one of my favorite ever dishes when we come to Galicia.

We went past the cathedral several times trying to get good photos of it. (There was a lot of shade.) The doors and sculptures on all sides are spectacular, though. Here are a few examples.

After all the walking around in the fresh air, we were tired and hungry. We went back to the hotel to rest for awhile, and then we went out for a late dinner. (Dinner is always late in Spain.)


The place that we discovered was a charming bistro named Zazu that specialized in a Mediterranean menu. We don't have a picture of the restaurant per se, but this site will give you an idea of their atmosphere and menu.  Our server found us a table in a small upstairs room that was softly lit and full of artwork on the walls. He was from Germany, but he spoke excellent English and was so attentive you could tell he really liked his job. If you go to Salamanca, we all recommend this place. For starters, I had grilled vegetables and Rajan had crabcakes, and then for the entrée we split an order of squash-stuffed raviolis. The wine was Gewurtztraminer for Terri and myself, and the gents had a red from the Toro region, followed by excellent café. Then our friendly waiter kindly took a picture of us before we left.

Day Two was another day of sightseeing and some surprises. We wandered around the old streets, taking pictures of the buildings and shopping. Street musicians were situated in main walk areas, and the one below was especially interesting, tuning, and later playing what I think was a zither.

It was a sunny day, and especially good for taking pictures of the Cathedral.

Then a real suprise lay ahead when we went up one of the towers of La Clerecía, the church and ecclesiastic college shown at the beginning of this post in the background. The stairs were old-fashioned, wooden, and narrow, about twelve or fifteen to a landing, and they went up, up, up. I don't know how many we climbed, but it was well worth the view of the city once we got to the floor where most of these pictures are taken. There are little balconies at all the windows of the tower we were in, as well as a balcony that took us to the opposite tower, so we could see th city below from many angles.