I am pleased to announce my husband's new website, VARADANARTFOTO.COM

Many of you have commented on the photographs of Galicia posted in my blog. Most of them were done by my husband, Rajan Varadan, whose specialty is actually black and white photography. Ever since we’ve been going to Galicia, he’s been captivated by the beautiful old stone buildings and walls (some of them in ruins, and some in beautiful repair). And the countryside especially offers beauty because of the various textures in the landscape (vineyards, forests, pastures, and rising mist).

For about six years he made calendars featuring 12 of the particular year’s best. Then last summer, our friends in Galicia, Terri and David Anderson, arranged for an exhibition of those 60 photos at the Concello in Ferreira, a town near where we live. We weren’t able to be there, as we’d returned from a trip in the spring, but they sent pictures of the exhibition, and I blogged about it in my May 28th post this year (you can click on it at the right margin.)


Now he has started an online gallery with photos to share: So far he only has the Galicia gallery up, but in the future, he will have a California gallery and a gallery with photos of places in India. (He’s from India, and is especially enamored of the Belur Halibid temples with their many exquisite sculptures and carvings.)


At present he is featuring 62 black and white photographs of Galicia, many of which were not in the show. The website is VARADANARTFOTO.COM  When you go to the site, click first “Portfolio” and then “Galicia”.

Scroll through all the photos, each of which has a name and number.
The latter is important, because we are running a contest! Whoever wins gets an 8-1/2 by 11 print of their favorite photo free, including free shipping -- from wherever you are.

On my Facebook you can get more points, spelled out by my post on my timeline. When the contest is over, I use a randomizer to pick the winning number.

Meanwhile, scattered throughout this post is a sampler of  photos to enjoy. And remember, you can see 54 more pictures and pick one to win on his website.

Trasulfe, the Village We Love


When people learn how often we go to Galicia, Spain, they often just hear "Spain", and ask us if we've seen Madrid, Barcelona, Sevilla . . .  No, we haven't been to any of those places (except for the Madrid airport).

Somehow Galicia has cast its spell over us, and, except for two short trips to Portugal (which we loved, and I'll write about in a later post), we haven't gotten out of Galicia. There is, of course, the famous city of Santiago, destination of pilgrims from all over the world, with a beautiful cathedral and an interesting old part of the city (as is the case with so many of these ancient cities in Galicia.) And I wrote about Lugo my previous post. But what captures our hearts so completely is the tiny village of Trasulfe. We bought a restored house there from friends, and the people of Trasulfe and their way of life have become an integral part of our lives.


Trasulfe once had a population of 84 people (counting the children) and a couple of grand houses that have fallen to ruin. Many of the stone buildings are in ruins. It is a rural area, and for years young people have left for the big cities or even gone out of the country to find jobs. Our neighbor across the lane worked for many years in Switzerland before returning home to care for his mother, and now he tends sheep. The couple down the hill lived in Barcelona for many years, but are originally from Trasulfe. The man who built our garage lives in a nearby town/village of Turiz, (or Toiriz in Gallegan), but his wife is from Trasulfe, and he tends his cows in a pasture nearby. And our neighbors down the lane who have had such an impact on us, Eva and Manolo, are both from Trasulfe. All of them have siblings, cousins, or grown children, who are living in places like Madrid or Barcelona or abroad in Argentina or Venezuela. The old villages are emptying out, and it's a shame.

Originally, as I said, Trasulfe had a population of 84, and now it has a year-round population of 8! This is the story of a lot of the hill towns of Galicia, and also other parts of Spain. The village populations are aging, but they still carry on their way of life, keeping chickens, pigs, rabbits, sheep, cows (never a huge herd), and growing crops and vineyards. When we arrive, our neighbors bring us wine and eggs regularly, along with whatever is growing that time of year. (We go in spring and fall, so it can be anything from tomatoes, walnuts, chestnuts, peaches, figs -- whatever they have, they generously share.)


Despite the hardship of small rural villages (always, always they are working), there is a sense of peace and tranquility, of going with the seasons, of the cycle of life, that restores us while we are there. It's "hill and vale" country, and the land slopes down beyond our small fields into a valley, sloping up again on the far side, where we can see small villages akin to ours: white plaster walls, red tile roofs, varied shades of green due to fruit trees (apple, peach, figs), nut trees (walnut, chestnut), and low rock dry walls covered with brambles. Because of the elevation and the vales, nearly every morning begins with mist rising, sometimes an ocean of fog lapping against the far slopes; sometimes a veil over all, making the view haunting and mysterious. Galicia has two coasts, the Atlantic to the west, and the Bay of Biscayne to the north, and consequently it is the wet part of Spain. It's been called "green Spain", and you can see why.


One of the turning points on the way to Trasulfe is a hunting preserve filled with chestnut trees. It always freaks me out, because it reminds me of the forest in Disney's original Snow White, when the trees seemed malevolent. But actually neighbors from all the nearby villages go there to pick chestnuts. The chestnuts were late this year, due to a very dry summer.

Galicia -- all of Spain, in fact -- abounds with festivals and fiestas, and we missed two crucial ones this year: The festival in Toiriz Santa Maria which ended the day before we arrived is one we usually go to. It is not related to the wine harvest at all -- it's a saint's day fiesta -- but it follows the wine harvest (or vendimia), so it's always associated in our minds with the vendimia. But the festival at Santa Eulalia is actually a festival of the chestnuts, a one day festival that had an orchestra this year, and it was on the very day we were leaving, sad to say. The fiestas are so much fun. Orchestras and dancing mostly, but people come from nearby villages and it's an opportunity to catch up on talk.

Another moment of great sociability at day's end is gathering at the bench or some convenient group of rocks to just sit and talk. We look forward to this, despite our broken Spanish, and each year we can understand more and more. The picture to the right is from a couple of years ago, as we haven't yet downloaded all of this trip's pictures. It is always such a pleasure to see them again. 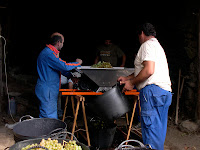 This photo is from our very first fall trip, which coincided with the vendimia. Friends and relatives were helping to make wine -- a wine that is very low in alcoholic content, as they don't add sugar when making it. They've been making it in their families for centuries, and every household has its bodega with a store of wine.


What does have a high alcoholic content is the aguardiente, a clear brandy they distill, similar to grappa in Italy. All the neighbors make it in small quantities for home use, and sometimes they keep it clear, and sometimes they make herbal or coffee liquors from it. But it's always strong: A little goes a long, long way! We have a bottle going back years, because we drink it once or twice only, when the neighbor who gave it to us comes over for meriendas (snacks) a couple of nights before we leave.

This year we had a delightful surprise: I call it "The Night of the Quemada". We invited our neighbors down the road in for meriendas one evening, as they had given us a lovely lunch one day, and they brought the quemada and invited our neighbor across the road too. Quemada is made in a special clay bowl and prepared in a special way: You peel an orange, an apple, and a lemon, and put only the peels in the bowl, along with some sugar, then a generous handful of coffee beans.

Then you pour a generous quantity of aguardiente over it -- and set fire to it! The fire burns a soft blue with some yellow, and it has to burn for a few minutes so that the drink picks up all the essence of the fruit peels and beans. It's a marvelous aroma! (Our little dining room smelled so good afterwards!) Then it's served in very small cups -- and for good reason!

Now, a question for you: Where is your dream place you would like to go if you traveled away from your usual walk of life? What would make you return to it again and again?

Posted by Elizabeth Varadan, Author at 10:18 AM 29 comments: