With blog problems these past few days, I'm behind in my posting. Last Friday was a fabulous evening at Torre Vilariño (a later post and photos will come), and we spent both Saturday and Sunday in Monforte enjoying the Medieval Faire (again, a later post and pictures will come).

First, though, I have to share a concert we attended in Quiroga by a fabulous fadista (Fado singer)— María do Ceo. She's very popular here and famous worldwide. 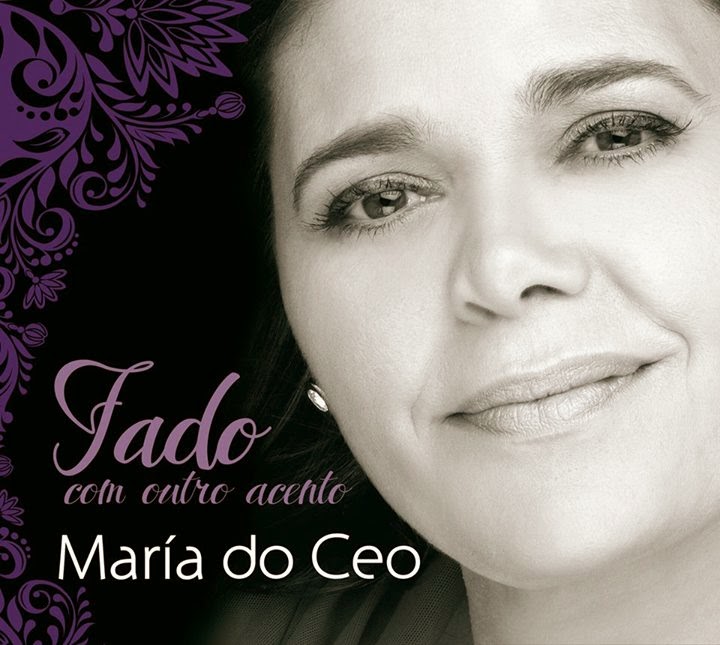 I first heard María do Ceo sing last June when she gave a concert at Rectoral de Castillon. At that time, I bought the CD shown to your left, and I blogged about it HERE.  It was an unforgettable evening, and my first exposure to Fado. (That was when Rajan and I we were taking turns with trips while the other nursed our ailing dog during his last days.) When I returned home and played the CD for Rajan, he loved Fado. Attending one of her concerts became a priority for this trip.

We went with friends Craig and Melanie, who hadn't heard Fado before, and they became converts, too. At the end of the concert, we gathered with others to get María do Ceo's autograph. She is a remarkable performer, and very down-to-earth and unpretentious after performances. Everyone was having their picture taken with her, and she welcomed us to have our picture with her too. What a treat!


You can go to her website and see her CD's HERE.

We bought a new CD that we enjoy as much as the first one, and now I wish I had bought more. Each one is unique. The one we bought isn't shown in the Discography section on her website above. But there are many performances by her on YouTube at this site, so you can get a feel for her singing.

Fado, as I mentioned in my earlier post, is a distinctive art form of Portugal, similar in one sense to American Blues, in that it is emotional and comes from deep in the heart and soul. But Fado has a variety of influences, one of them Moorish, and you can hear that in the warbling minor trills in some of the songs. The word itself means "Fate." Usually the songs are about deep yearning and thwarted dreams. Some of them can have a cheerful beat, but it's a fatalistic cheer, dealing with life's outcomes. It's not depressing, though. It's a response to what life deals you. I'm hooked on Fado, and if I can find another Fado concert, I will. Unfortunately, we will be gone before María do Ceo's next concerts in Galicia, but we will watch her schedule and hope to hear her during our next visit in the fall.

María do Ceo is from Portugal, but she lives in Ourense, Galicia. Her songs are in Portuguese, but her singing is quite popular all over Galicia. Gallego, or Galego, or Galician—all are accepted names for the Galician language—is a sister language to Portuguese, so all her songs are understandable to Galicians. I read recently that Gallego and Portuguese share 85% of vocabulary. Our neighbors, in fact, have told us if we knew Portuguese, we would be able to understand Gallego.

Meanwhile, I hope you will visit her website and enjoy the video site HERE. I strongly recommend "Lela" and "Negra Sombe". But, really, they are all good.

How about you? Do you have favorite music genre? A favorite singer? Please share.

Posted by Elizabeth Varadan, Author at 10:14 AM 13 comments:

It's hard to believe that we arrived in Spain 8 days ago. Time flows by in a different way, even though we bring work with us. The trip is long, we arrive exhausted, but we have rituals along the way. The trip is more than 24 hours (door to door) and spans two days. We leave Saturday morning, have a long stretch in Dallas/FW Airport, where we have battered and fried green beans and a glass of beer at TGIF, waiting for our next flight. We arrive in Madrid around 10:30 a.m. Sunday, and have a lunch of smoked salmon, bread, and wine, then fight sleep while waiting for our connection to Santiago de Composetela. We arrive in Santiago a little after 5:00 p.m. and collect baggage. Our friends, Terri and David,  meet us, drive us back to our house in Trasulfe, where we "turn on the house" (electricity, water, gas-tank connections, etc.), then we all go out to eat at a restaurant in Monforte, called O Pincho, where we split delicious raciones. (Rations are smaller than dinners, bigger than tapas.) 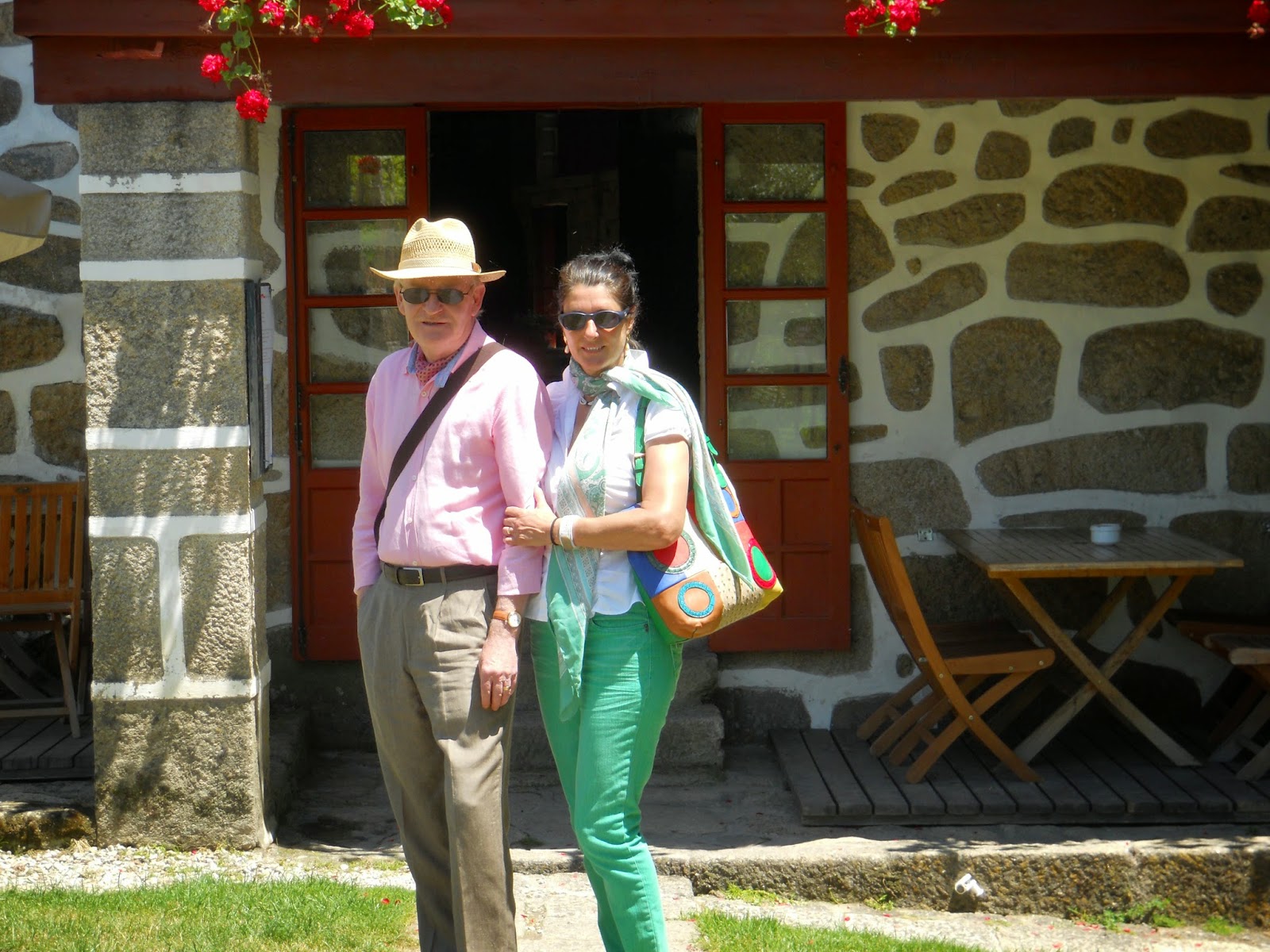 Here's a picture of Terri and David from last summer (we haven't yet gotten around to pictures of friends on this trip.) As soon as we got to O Pincho, we woke up and had a great time catching up on news, eating rations and drinking the house wine. The next morning, waking with the sun (about seven-ish), eating lunch at 2:00 p.m. and dinner around 8:00 or 9:00 p.m., Rajan and I realized we'd fallen into Spanish time right away, with very little jet lag!

Friends and neighbors tell us it was a continually rainy winter, but our first few days were sunny. There was the usual morning mist and intermittent sprinkles through the day that vanished in afternoon heat. Still, we felt free to bring out our patio table and chairs. Then things changed.

After four beautiful sunshiny days, on Thursday afternoon a fierce hailstorm struck. First thunder rolled and roared for about an hour, and then hail beat down for about thirty minutes. This was the result :


I wanted to put a video here, with all its great sound effects, but I couldn't get my video to play. (I've sent to Google for help.) But this should give you some idea.
On another note, we've been making a point to walk at least two miles a day. In about a year, I want to walk a portion of the Camino that ends in Santiago. (One item on my bucket list.) I won't be able to make it to Santiago, but a friend informed me that if you walk 100 km, you can get a certificate. That's about sixty miles. Next spring I'd like to do about 30 miles, and then in the fall of 2015 do the second set. So far, a few times we've parked at Gadis, one of the big supermarkets at the edge of Monforte, and walked up to the Parador.

Posted by Elizabeth Varadan, Author at 1:26 AM 13 comments:

Back on the Ship

The book has been sent to the contest. My last art club session was yesterday. Tomorrow we leave for Spain. But first, one last post about the cruise on St. Lawrence River, which continues to be quite a highlight in our travels.


Our fourth day out, we docked at Halifax, Nova Scotia and were immediately reminded of Nova Scotia's Scottish connection. Bagpipes and kilts everywhere. Even the tour guides met us in kilts, as two busloads set off for Peggy's Cove.

Peggy's Cove seemed a wild and desolate place. I've always been captivated by fog and mist, no doubt to stories I read when I was younger. Mysterious and magical things happened in foggy locations. I love Lighthouses, too, so this one captured my imagination completely:

And there was an official greeter to the cove as well, complete with kilts and bagpipe:

And then it was time to board the bus again and travel to Fairview Lawn Cemetery. Why a cemetery? A whole section of it contains graves of 120 to 150 of the unfortunate passengers on the ill-fated Titanic. (The numbers vary from report to report.) I've seen several movies through the years about the Titanic, but nothing quite prepared me for the rows upon rows of markers. Some had only a number, since the body could not be identified. You can read more about the Titanic HERE and HERE), but here are some of the pictures we took at the cemetery: (Though many of the passengers were never recovered; just "buried at sea".

After that, we returned to the ship for eats and socializing and various leisure activities. The following day we went to Bar Harbor, Maine, but that will have to wait for another day, as the next few posts are going to be from Spain and Portugal.

I was never particularly a cruise person before, but this one converted me. Of course, we were iin great company, as well as seeing great sights. And when I get back to posting about Bar Harbor, I'll include a recap with pictures of the great crowd of friends we traveled with.

Meanwhile, I hope you have enjoyed the bits and pieces of this cruise so far. And if you know any special facts about the Titanic, I hope you will share them. That is an event that continues to have such a grip on my conssciousness, and the public's as well.

Posted by Elizabeth Varadan, Author at 9:33 AM 10 comments: