The journey really started the last two weeks of August, when we went to India to visit our relatives for two weeks. We stayed with our 88-year-old widowed sister-in-law, Soundara, in the section of Chennai called Virukambakkam, where we usually stay. It was a long overdue visit. My husband and I visited in 2012, and then he went again in 2013, a year after her husband's death.

I have always admired Soundara. She is truly a sister. She is tinier than I am, and while we were there insisted on cooking great meals. She cannot not be busy, and she is interested in so many things. You can see the sweetness of her personality in this picture.

Our grandnephew, Murari, picked us up at the airport, at 4:30 a.m., and we stepped outside into an amazing heat. In seconds I was glistening with moisture from the humidity. I didn't take as many pictures on this trip as I meant to, and this one, at the left, was taken when we visited Murari's  parents' home a few days later. It took us about an hour to get to the house. After we showered and unpacked, she had coffee waiting for us. There is nothing like good, strong, Indian coffee.
Later, Vasu (My husband's sister's                     eldest son) and his wife, Srimathi, visited
the house (at right), and still later, Murari's father, Ravi, stopped by, as well.
Distances are very far in Chennai, and the traffic is unbelievably thick. Each time we've gone back, it seems the traffic has doubled from the time before, so it is always a breath-taking ride, and a long one, to get from one place to another.

We visited Rajan's doctor brother (Parthasarathy) and his wife, Vasantha, who live with their son and their son's family. Even though he is retired, he keeps up with current medicine, and we often turn to him for his medical opinion. On the trip this particular day, I was so enamored of the garden in his son's home, that I failed to take a lot of family pictures! Here are three family photos I remembered to take this time:

But here are three from the 2012 visit, showing the whole family:


Also, some pictures of the flower garden on this trip, that will show you how beautiful it is. there is a long passage way of flowers outside the ground floor, and then a roof garden with many potted flowers and plants. 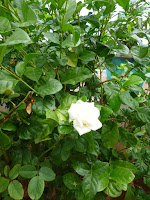 This house is near the ocean and gets a nice breeze, so it is a nice oasis of coolness and beauty, so refreshing in the humid heat of Chennai.

On another day, we visited Rajan's brother, Narayanan, in two of his son's homes.

The first was in the home of Ravi and his wife, Nirmala. They are the parents of Murari, who picked us up at the airport. (Murari will be getting married this coming Monday, and we are so sorry that we are going to miss the wedding. We'll be disembarking from our plane home at about the time the wedding is beginning.)

After that, we visited the home of one of Narayanan's other grandsons, Arjun and his wife Smrithi, along with Arjun's parents, Vasanth and Nalini. I really messed up, here! I got so engrossed in the conversations, that I forgot to take pictures. Luckily, Smrithi and Arjun and Nalini came to visit when we were at another grandnephew's home, so I did get a least a picture of them when we went for an overnight at the home of Madhu and Malathi. Madhu is the youngest son of Rajan's sister, and there are pictures of her, as well. This year she had her 80th birthday, but somehow she has kept youthful and full of energy.

Our last family visit was to Bangalore, where we visited to homes. We stayed two nights with our nephew, Ashok, his wife Gayathri, and their two sons, Rohan and Tarun, and Ashok's mother (Rajan's sister-in-law) Malathi. From there, we visited another grandniece, Priya, and her husband, Balajit. Once again, I was so involved in the visits that I didn't take as many pictures as I meant to take. Priya is the sister of the pretty woman in turquoise above, Sudha. It was a great pleasure to see her and her husband, and I was really vexed with myself for not remembering to use the camera I was carrying around everywhere. At Ashok's home, too, we mostly visited, and then on the last day I remembered pictures. I did get some pictures that included Malathi and Tarun. Tarun had just gone to temple for his thread ceremony, a ceremony for Brahmins similar to a bar mitzvah for Jewish boys, in that he was crossing over into adulthood with spiritual responsibilities.

We took the night train to return from Bangalore to Chennai, and then there were just two days left before we departed for Spain. Earlier Rajan developed a really serious reaction to the anti-malarial medicine we took for the trip, so he had to discontinue it after 10 days. Then we had to wait (in Spain) 21 days from the last unprotected mosquito bite in India, which was a bit stressful--all the more so as his doctor brother says he is allergic to all malarial medicine -- including the one that's used to treat the illness. I was quite worried, as there were malarial cases in both Chennai and Bangalore, and he'd been bit by mosquitoes in both places. But all was well that ended well. He made it through the incubation period, and no illness.

I mentioned that Maithreyi gave birth to a little girl the day before we left. Her father, Madhu, kindly sent us pictures of the naming ceremony. Here are two:

The last two days we rested and spent time with Soundara and packed.  Several relatives came to visit, and we also walked over to visit some in-laws through my Pittsburgh brother-in-law's wife, Kalyani. Raghavan and Kalyani are the parents of the nephew who got married last June. Her brother, Raju,  and his wife, Renukkah, live three short streets away from Soundara. Renukkah is an artist, and her work is really dazzling.


And then the time drew to a close. But seeing everyone again is something I will treasure through the years, all the more so because, due to my husband's reaction to malarial protection, we don't want to risk his health in the future. At times like these, you appreciate the Internet and all the avenues of keeping in touch with family. We are thinking of them with love and prayers and are thankful that we got this visit in.

Next week I'll be moving on to the time spent in Galicia. Until then, I'll be visiting your blogs and catching up on your news.

Posted by Elizabeth Varadan, Author at 8:18 AM 19 comments: