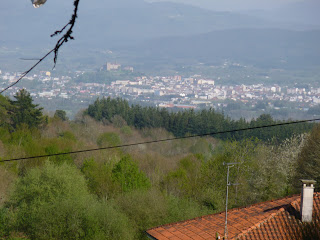 Even though we are on "vacation", in Galicia once again, I work part-time most days, either writing or doing research. Rajan takes pictures, mostly black and white, that he develops when we get home. I take my point and shoot camera everywhere and snap less professional shots. I couldn't resist this one on the left: in the far distance on the hill is the Parador of Monforte de Lemos, the town that has built up all around it, below.

Meanwhile, this has been a "writerly" time for me. First, shortly after our arrival two and a half weeks ago, I received word that a short story I had submitted was accepted. The title is "Going Home" and it was published on April 13th by a cool magazine called Page & Spine. If you are interested, you can read it HERE.

Second,  I've been doing research for a character in my current WIP. In my  book, one of the characters turned out to have been in Vaudeville in  her earlier years. (I'm sure all you writers know how that happens. You suddenly learn something about a character you didn't know earlier. She let me know she had been in Vaudeville.) 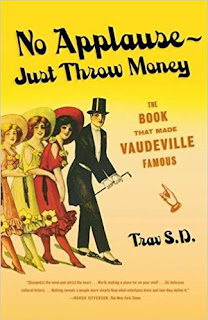 Well, I knew next to nothing about Vaudeville, and I love research, so off I went to find information. I've been mesmerized by a book called No Applause — Just Throw Money, by Trav S. D. (Yup, that's the author's name.) The book is expensive online, unless you go for a used copy. I did, and I was fortunate to get copy in pristine condition. Here's the book:

The writing is fast-paced, humorous, and at times brutally honest about the racism and prejudice that permeated the industry. (Vaudeville was one of the few avenues open to minorities and immigrants, but the actors themselves played off their own stereotypes in the early days.) The author gives a comprehensive history. I hadn't realized the differences between music halls, saloon variety shows, or how gradually respectability was worked into shows that once were a step away from medicine shows, freak shows, etc. They had an unsavory past, too, thanks to after-hours entertainment before they gradually evolved into what became known as Vaudeville. Then Vaudeville became cut-throat business for managers, theater owners, agents, etc., until the movies came along. I'm only halfway through the book, but since one of my characters wants to be a movie star, I'm glad to see this book has information about the early days of the movies as well.

Third, while doing the research I need for this character, I've been writing poetry. A blog friend mentioned a poetry challenge for April ( National Poetry Month). (She writes Haiku and has a wonderful blog called Words and Such; she always has rewarding posts, which you can read HERE.

The challenge was actually a contest: You register to write 30 poems in 30 days around a theme of your choice. At the end of it, you have a chapbook. I started on April 1st, but I didn't register in time, so I missed the contest. Still, I gave myself the challenge anyway, because I felt I needed to be writing while I worked out what I was learning in my research in terms of the characters. I felt I couldn't afford not to be writing.

Well, "I did it!" I wrote 30 poems in 30 days. Today I wrote my 30th. I'm done! Whew! But it really was a nice way to start each day. I actually woke up many mornings thinking about the new poem for the day.

How about you? Do you like poetry? Do you like research? Do your characters surprise you with revelations about themselves? Have you ever written a chapbook? (If so, I'd sure like some information about how to put one together.)

Dragonella is Back — This Time in Spanish!

Good News: Dragonella has been translated into Spanish, and I'm so excited about it. \

You can find it on Amazon HERE:

This came about in a wonderful way. During our last trip to Spain, I musingly said to our good friend, Terri Anderson, "I wish I knew someone who could translate Dragonella into Spanish." I had already checked with the publishers, and they were interested, but an earlier prospect fell through.

As it turned out, Terri knew just the right person—Carla López Piñeiro—and Rajan and I had already met her. Terri facilitated a new meeting with Carla, who read the picture book through in English, and then said, yes, she'd love to translate it. Now that the book has been released, Carla was kind enough to answer some interview questions, which you will find below the pictures.

1. Tell us a little about yourself. Where are you from?
I am from a small village in Galicia, a region of the North of Spain.

2. As a native Spanish speaker, you are very fluent in English. Had you studied English for a long time?
Thank you! The truth is I have been studying English almost during all my live. I learnt the first basic vocabulary and structure at Primary School, and then continued studying at High School and the University. But I experienced the greatest advance when I spent some months in Australia and then in the USA. After that, I have never stopped practicing: Reading, watching films, etc. And still, I keep making mistakes and learning something new almost every single day. I am pretty sure I am going to be a student of the English language for ever!

3. Was it difficult to translate a book from English into Spanish?
I think it was not difficult in general. I had some problems with some words and expressions. But that gave me the opportunity of do some research and expand my boundaries learning new ways of saying things, even in Spanish. Besides, I was not alone in the process! I have the help of my friend Terri Anderson, an English native, as you well know.

4. What was your favorite part of the process?
Two were my favorite parts of the project: the first, the beginning. The first reading, the moment I discovered the whole story and the characters; the second, at the end, when the translation was almost ready but it was still necessary to work on some small details.

5. Have you translated other writings from one language to another?
No, I have not. That was my first experience translating a text at a professional level.

6. Do you have any future translation projects?
I do not have any translation project right now, but I would like it!
7. How can readers contact you if they want to know more about you or your projects?
They can write me at unahabitacionparacarla@gmail.com
I will be happy to answer their questions if I can.

Thank you, Carla, for your wonderful translation and for taking the time for this interview. I wish you luck in future translation projects.

Blog friends, do any of you speak and read Spanish? Have you had any of your work translated into other languages? If you could learn a second language, which language would it be?

Posted by Elizabeth Varadan, Author at 6:42 AM 16 comments: