An Evening of Fado, and More 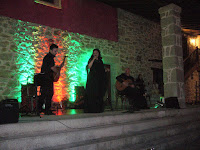 Ever since I first heard Maria do Ceo sing Fado on a summer night four years ago, at Rectoral de Castillon, a "casa rural" in Galicia, I've been a fan, both of Maria do Ceo and of Fado. (You can read my post about it HERE )

The following spring, 2014, when my husband and I went to Braga, Portugal for the first time, a friend at the hotel suggested other famous Fado singers we should hear — Mariza, Amalia, Anna Moura — and we've both been hooked on Fado ever since.


So it was our special good fortune that fall to meet a Fadista in Braga, Mariza da Luz, and
become friends with her. Since then we try to see her perform every time we go to Braga. (We had started going to Braga for research on a mystery I've written that is set in Braga.) 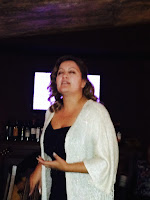 Last week was no exception. Originally we had heard her sing at a restaurant, but Saturday we heard her and several others sing at a dinner put on by a Fado Association. As you can see, Fado is emotional and expressive, pulling a listener into a different world — and the singer, as well. Traditionally a fadista is accompanies by two guitars: an acoustical guitar and a twelve-string  Portuguese guitar (which somewhat resembles a bouzouki with its bowl-shape, although they are not identical by any means.) 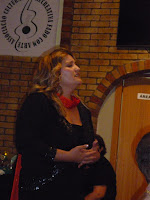 Not every member of the association is interested in Fado as a career; some are simply aficionados who took turns singing during the dinner. All of the voices were good, though, and the ambience of the evening was full of hearty good will and a deep love of Fado. (Nearly everyone in the room could sing the chorus of every single song.) 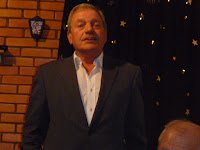 I'm always comparing Fado to opera, especially the serious/somber Fado, the Fado that dwells on fate and thwarted destiny. If you were to take one of the serious operas  and cram the essence of it into one aria, you'd have the depth of emotion and the lyricism of Fado.
But, like opera, Fado has a comic counterpart as well, and the gentleman at the far right in the top row sings these humorous Fados (although, as our friend, Marisa, pointed out, they often have a subtle serious overtone as well, inspiring the sort of chuckle that can fade with too much thought.)

Too soon, it was over. At the end of the evening, all the singers gathered for final applause and photos. 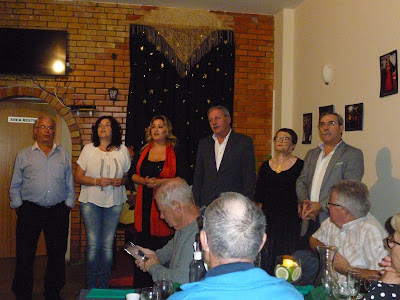 Meanwhile, earlier in the day, a young man at Centésima Página, the bookstore/eatery we love to visit, told us a great deal about well-known fado singers and the history of Fado. He introduced us to a CD of Fadistas from Coimbra, a city famous for its male fadistas. The recordings are old and "tinny", in that they were recorded back in 1928, 1929, 1930. But all of the voices shine, their  power and expressiveness evident.  I've mentioned that Fado reminds me of opera, and this CD showed the operatic power of their voices. We left the store with a bag of CDs to enrich our musical library. As I have said before, I can never leave a bookstore empty-handed (even if it's CDs). 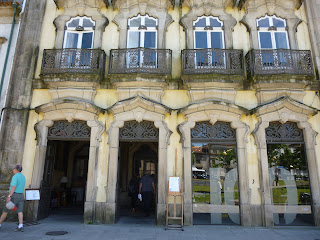 How about you? Do you like Fado? Opera? What is your favorite music? Do you love book stores and music stores?


Posted by Elizabeth Varadan, Author at 1:41 AM 16 comments: