Catching up on Our Trip to Galicia, Spain

There are so many experiences from our last trip that I wanted to blog about all the time we were there. But I also needed to finish the rewrite of my cozy mystery--which I did. Now I'm back home, putting the rewrite chapters together for some beta readers to read and give me new feedback. And now I'm free to post again. Despite a lot of rain, it was a wonderful trip.


One particular day stands out,  and that is May 17th. May 17th is my husband's birthday, and in recent years we usually are in Galicia when that happens. It is also El Día de las Letras for all of Galicia, celebrating Galician authors and poets and the freedom for Galicians to read and write again in their own language -- Galego. (Under Franco, it was forbidden.) But friends of ours, Elvira and José, had also been urging us each year to see special festivities at a village called Vilanova dos Infantes, near the city of Celanova.

The festival includes folklorico dancing groups all day long, as well as artisan displays of spinning, weaving, ceramics, basketry, among other crafts, and it takes place every year on May 17th. So this time we and several friends attended it, and later attended a lunch party by Elvira and Jose afterwards.

We spent the morning strolling around the village, enjoying the dances and displays, before going to our friends' house for lunch. The groups varied in ages, as you can see. Enjoy some of these photos. (I wish I had thought to video it so that you could hear the music.)

As we wandered through the village, we encountered various parades with the musicians using typically Galician instruments. One such instrument is the Galician bagpipe, called the gaito. A gaito player is called a gaitero, and famous gaiteros give concerts all over Galicia. As you can see in the pictures below, the musicians start out young to learn their art.


I tried to get pictures of the artisans at work, but streets were too crowded. And, much as I was tempted to buy a vase, the problem of transporting it without breakage was too challenging.   So, it was enough to enjoy the experience. 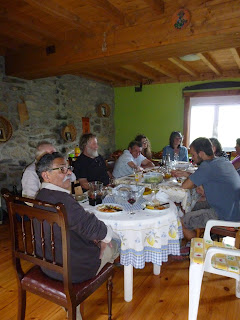 Afterwards we went to Elvira's home to enjoy a sumptuous feast of a luncheon she had laid out for us: so many dishes, and all of them delicious. She and José are such gracious hosts, and you can see we all had a great time with food and wine and wonderful company. (We met Elvira through our friend, Jacki Edmonds, and how we wished Jacki were there to join us.)


Then, of course, Elvira and José decided to do a quemada.

A quemada is both a special drink and the vessel and cups it is prepared and served in. The ingredients are coffee beans, orange peel, apple slices (and some people add other touches), sugar, and, most of all, aguardiente, a homemade brandy in every home that will blow your head off if drunk straight. In a quemada, the effect is reduced because of the way it is prepared. You put all of the ingredients into the quemada bowl, set fire to the liquid, and stir continually until the blue flames die down. (A lot of the alcohol burns off--but not all!)
Here are the masters plying their skill:

And then, alas, it was time to start the drive home. But before departure, I took a few pictures of Elvira's home and view. We love the old stone buildings of villages like this -- they are everywhere in Galicia. And you can see the peace and serenity of Galicia in the view from her window--both the vegetable garden she and José tend, and the layers of hills seemingly without end.


How about you? Do you have a favorite place that seems to exude peace and serenity? Do you like old buildings? Do you garden? If so, flowers or vegetables? Or both?
Posted by Elizabeth Varadan, Author at 10:35 AM 12 comments:

Still Working on the Rewrite

All I can say is, this had better be as good as I'm hoping when I finish! Hope to see you soon.
Posted by Elizabeth Varadan, Author at 1:28 AM 2 comments: