The Buildings of Braga


For some time I have been wanting to write about the wonderful buildings we see each time we go to Braga. The Sé Cathedral is probably good to start with for two reasons: The personal reason is that my husband, who loves black and white photography, is entranced with the stone churches of Spain and Portugal, and this building is a knock-out. The more serious reason is that it is the seat of the Archdiocese of Braga and one of the oldest cathedrals in Portugal; some say the oldest. As such, it shows the many architectural features seen all over the city: The entrance facade is Romanesque (notice the arches);  the bell towers are Baroque, (intricately ornamental). And inside, many areas are tiled with the distinctive Azulejo blue and white tiles one sees on walls, both exterior and interior, all over Portugal.

Braga is a city of churches, given its long history as the the religious capital of Portugal. But you see the interweaving of Roman and Baroque in many of the churches, and also many of the mansions and museums. One example is the old Archbishop's Palace, where the Jardim de Santa Barbara (Santa Barbara Garden) is nestled in a back square of the former palace.

The new Archbishop's palace is located elsewhere and this crenelated building now houses archived material for the University of Minho. But step inside the entrance and you can see the true beauty of Azulejos: 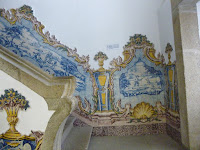 So many insides of churches had scenes in Azulejos, too. And many an exterior is decorated in blue and white tiles. While ceramic tiles were used all over Europe and were inspired by Moorish and Egyptian, the way Azulejos are used in Portugal have become an art form. In addition, many walls in Braga often display solid or geometrically patterned tiles as well: 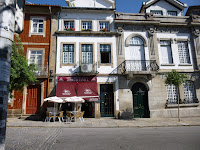 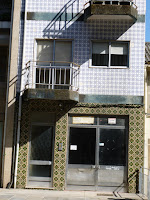 All the beautiful colors and textures add to the distinctive quality to each building. No two buildings are exactly alike. Some have arched arched windows; others arched doorways. Some have painted walls, others have tiled walls. Sometimes the grill work of balconies is black; other times it's painted in bright colors. I could have taken endless pictures. You've actually been spared an extensive photo album of shots! :-)

Back to the churches: You could call Braga a city of churches. As the religious capital of Portugal, there are over thirty-to-thirty-five churches, in addition to the Sé Cathedral, and all quite distinctive. There is Igreja dos Congregados on the one side of Avenida Central bordering  Praça República (Republican Square (two views below).
There was also Igreja a Senhora Branca (Church of Our Lady in White) just across from our hotel (Hotel Senhora a Branca). A sign forbade picture taking inside, but the chapel was lovely, tiled in two shades of yellow with the main altar ceiling painted blue. The tiled facade could be photographed, and above the entrance, a statue of "Our Lady" in an alcove was lit by night: Here are some pictures by both day and night:

On this particular trip (June, 2015), we were there during the full moon, which added a veil of mystery at night.

There were other churches of note: Bon Jesus, four miles out of town, up in the hills, which we did see last fall while attending a photography exhibit. (Our pictures were mainly of the exhibit, but here is a plaque on one wall.) A small, baroque church  on a street behind the Arcade, Igreja da Terceira Ordem Regular de São Francisco (Church of the Third Regular Order of Saint Francis). And inside the arcade is a small church, Igreja Paroquial de Nossa Senhora da Lapa (Our Lady of Lapa). 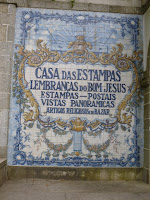 Then there were the museums. I'll concentrate on two that captured our attention. On our first trip, we went to the Museu da Imagem - The Image Museum, that specializes in photography exhibits. I had read of this museum in a travel article posted in the Huffington Post and was particularly interested, because my husband does black-and-white photography. Online, we made friends with the director, Rui Prata, and when we visited, we got acquainted with him and this beautiful museum. It's partly housed in an old tower of the original castle and an adjoining building that looks out on the street. Inside are current exhibits and historical photographs of Braga, and Rui Prata was generous with his time, telling us much about the history of Braga. He himself is a photographer, a curator of exhibits, and has recently retired from director of the museum to move to Finland from where he still curates exhibits all over Europe.

We'd often heard about the Museu dos Biscainhos, a historical mansion, originally built in the early 17th century by a noble family. Inside its many rooms are collections of 17th and 18th century European and Asian furniture, ceramics, porcelain, glass, paintings, etc. The baroque palace or manor had its own chapel, servant quarters, carriage house. But it was the 18th century baroque garden with statues, fountains, pathways between hedges and flower beds, and trees that blew me away, and I focus my pictures on its beauty. 9One tree is a giant tulip poplar, sent from Virginia to the nobleman's family 2 centuries ago.) 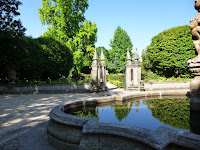 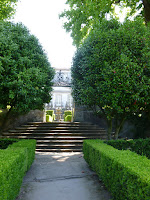 A 200-year-old tulip poplar and me.
Did I mention it was huge?
Moments like this give you a sense of your size in the scheme of things.

Last, but not lease, I'd like to mention our good fortune to meet Inȇs Barbosa on our first and subsequent visits. Inȇs is getting her Masters at University of Minho and was interning at the hotel where we stay (Hotel Senhora a Branca) until just recently, when she went to work for Lufthansa in Porto. She patiently answered innumerable questions about Braga, about Portugal, about Fado, etc. On our last visit she told us about some of the Folklorico groups in Braga. The group she belongs to were to perform in Santiago de Compostela, Galicia, the day after we left Braga.
She kindly sent me a video of the group performing in Braga, and I'm passing it on for you to enjoy: Just click HERE.

How about you? Do you belong to a heritage or historical interest group of some kind? Do you love historical buildings and gardens?