The Month of the Foot

I am two-and -a-half weeks into recovery from foot surgery, and there isn't a lot to think about when your day is spent reading one book after another while your foot is propped up on 3 or 4 pillows to keep it above your waist. (The first 2 weeks it was above my heart.) I could be doing book reviews, true, but it would be hard to pick one. I think I've read about 20 books in two weeks!


I keep wondering how this experience will play into my writing. Will it? Can it? I write mainly for kids. I had bunions and hammer-toes, an adult affliction that develops over time. The protagonist in my present WIP is a ten-year-old girl in the Victorian era, when corrective surgery for these didn't exist, and ten-year-olds wouldn't even know what they were.


Write what you know. Well, at present, what I know is all about foot surgery for bunions and hammertoes. Maybe one of you can have a character with this problem, in which case, please help yourself to the following information.

This is kinda what my feet looked like before surgery. I had one of each of these on each foot. And let me tell you, they are really uncomfortable. Almost all my shoes started rubbing painful blisters. I could only wear those comfy sliders that look like bedroom slippers. You know the ones I mean. My feet looked a little in between the picture on the left below and the picture on the right. You get the general idea.

I had the right foot done last summer, and the left foot done on June 22nd this summer. It's amazing what the doctor does: He cuts bone. Yes. He cuts the bunion off. Then he cuts the hammertoe off and pins that toe so that it's flat. Yeah. A pin. (That comes out after 5 weeks). The new big toe, now minus a bunion, has a little screw in the joint. That's forever.


When the foot is all healed up, it looks like a normal foot again, like the feet in the next picture. So far, my right foot looks like one of these. My left foot will soon. But that's not why I had it done. Believe me, I would have kept having my shoes stretched across the toe before having my bones cut. This is not something to do for cosmetic reasons. I did it because of discomfort and pain. I couldn't wear any shoe with comfort, and I couldn't do much walking for exercise.

But now that I do have normal feet again (or will, when the swelling on this one goes down), I admit I am looking forward to wearing nice shoes again like the ones way below.


Meanwhile, I suppose I can weave part of this experience into a story: If my MC gets sick in a sequel, I know what she feels like while recuperating, longing to be outside again; longing to walk around and say hello to friends or admire gardens or go peer in a shop window. I know, too, how tired of reading she might become, no matter how much she loves to read. Nothing gets completely wasted on a writer, does it?


How about you? Have you been through some experiences you can't really find a way to put per se into a story except to cull out bits and pieces? 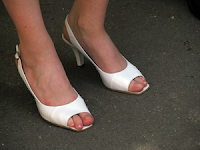 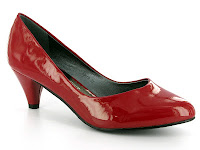 By the way, you may have noticed these shoes don't have pointy toes or high heels. But they beat the bedroom slipper look.
Posted by Elizabeth Varadan, Author at 1:04 PM 30 comments:

Saturday we received news that my husband's eldest brother passed away. We called Friday evening as we often do, (which was Saturday morning In India), and he was on the verge of passing even then. All the brothers were there, as well as my husband's sister, and we conveyed news to two brothers here. One of them called India later and called us back with the news that he had passed about an hour after we called. He was 90, and would have been 91 in September. He lived a long and incredibly good life, and still I am sorry he is gone, though also glad for his sake. The heat in India is killing heat at this season. He was suffering from that in recent calls. But even though our visits were infrequent through the years, I'll miss him in future visits. He radiated kindness and wisdom, as does my sister-in-law, his wife. And he always took my spiritual questions seriously and took time to answer them. Both he and his wife have been beacons of goodness for all the family, and after all the traditional rites and ceremonies are performed, his loss will be deeply felt, though he leaves a wonderful spiritual legacy for us all.
Posted by Elizabeth Varadan, Author at 11:50 AM 11 comments: