Another Book Review for Those Who Like Cozy Mysteries: Birthdays Are Murder

I'm an afficianado of cozy mysteries, which is why I write them instead of thrillers or suspense, etc. So recently I read this delightful cozy by Cindy Sample, Birthdays Are Murder: 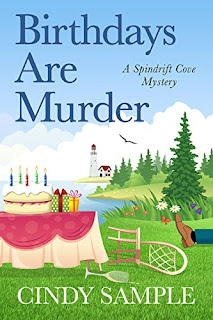 It’s always fun to discover a mystery full of both suspense and humor, which is why I like Cindy Sample's earlier "Dying" series. (Dying for a Double, Dying for a Daquiri, etc.) In the first book of her new mystery series set in Spindrift Cove, Birthdays Are Murder, Sample offers ample doses of both.

Protagonist Sierra Sullivan, aging actress and longtime widow, has moved to Spindrift Cove a small coastal town in the Pacific Northwest, to be near her married daughter. Formerly a cruise ship director who sang and danced in productions at sea, Sierra has taken a gig performing at a children’s birthday party to make ends meet. After the party, still in costume, Sierra discovers the body of the host. Soon after, Sierra discovers she is a prime suspect. To make matters worse, her daughter works for the police department. To make matters even worse, a new corpse turns up while Sierra is sneakily trying to find out who killed the first one.

It is hard to say more about this delightful book without dropping spoilers at every turn. And there are turns aplenty, as well as a colorful and well-rounded cast of characters. An added bonus is the wry humor that permeates Sierra’s observations as she tries to track down the killer without becoming the next victim herself.

You can get a copy of Sample's book HERE  . It's available in Kindle and in paperback.

I am hoping to get an interview with her later, but you can learn more about her on her WEBSITE.

In a future post I have news about a cozy of my own that is going to be published in June. Stay tuned.

Meanwhile, how is your own reading going? Do you have any cozies to recommend?

Posted by Elizabeth Varadan, Author at 5:00 AM 8 comments:

Dear friends:
So here is what has been happening that has kept us so busy: Difficult and wrenching as the decision is, we are going to move back to Sacramento in August. We LOVE Portugal. Living here has been a wonderful experience. And we love our friends here. If we were only feeling homesickness (and we do, despite how much we love it here), we would stay.
But we have to be honest with ourselves and our capacity to become truly proficient in the language. We are making progress and MAY become conversationally fluent (we plan to keep learning Portuguese.) But we probably never will be proficient enough to read through documents and papers and forms without hours and hours of translation efforts, and even then we may not get it right. (After 13months, we still are not able to fully use our oven; and we can’t make head or tale of the customs forms – I have lost a birthday present and a book by clicking the wrong information.)
What daunts us, though, is the future: We are having a great time now, because the two of us can share everything. The day will come when there is only one of us and having to navigate everything alone in a sea of not understanding is scary. The medical care we have received is outstanding. We have only used private health insurance and a private hospital so far, because our SNS (national health) clinic and the SNS hospital are a good distance from our flat. But the hospital we go to doesn’t perform major operations, deferring cardiac surgery, for example, to a hospital in Porto. (Rajan does have a cardiac condition.) SNS may do the surgeries that could come up, but eventually, one or both of us will not be able to drive. In emergencies that require an ambulance that whisk a patient off to the hills or another town, one’s spouse is not able to ride in the ambulance. Visits to the patient would be problematic.
We know friends would help if they could – but they have parents and relatives of their own they to take to doctor appointments, hospitals, visitations, etc., all around a full work week with long hours. They are not retired.
If we were about 20 years younger, with time to become throughly immersed in the language and the system, assuming we could figure out the transportation part when frail, we would risk staying; I can’t stress enough what a high point in our lives it has been to be here. But we are not 20 years younger. That's the reality.
On another note, my next book will be coming out soon, which I’ll save for a later post. The publisher sent me a mock up of the cover, which I love, but I'll wait for the cover reveal.
In the meantime, I’ll be posting a lot about our beloved Braga and Galicia for the remainder of our time here. This is the season of fiestas and festivals in both places. No pictures today, but there will be soon.
Posted by Elizabeth Varadan, Author at 3:41 AM 16 comments:

A LOT IS HAPPENING RIGHT NOW

I don't mean to be unsociable, but a lot is happening right now. Good stuff, but a lot. See you soon.

Posted by Elizabeth Varadan, Author at 8:00 AM 10 comments: