A Trip to an Ancient Castro 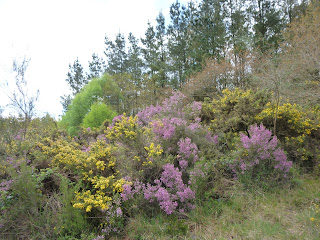 Last week we visited an ancient "castro" with friends David & Terry about an hour and a half's drive away. It's called Castro Maior (maior being Galegan for "major"— Major Castro; it's also spelled Castro Mayor in Castilian). A castro is an ancient, pre-Roman fort city, Celtic in origin from all I can read. We approached it via a faint road just off an offshoot of the  "Camino" (one of the pilgrimage routes to Santiago); mainly uphill, and bordered by the beautiful combination of purple heather and yellow broom you see here. (They are just coming into their own in this very late spring. )

This castro is 2400 years old, and what you see are the remains of what must have been ground floors of the various households in what was basically a village structure, but the method of building involved houses building onto houses with adjoining walls, and a main entrance into the village, with a path or lane going around the edge of the village, but cutting through at places between buildings—not unlike the present plans in the present villages (which all are old and follow an ancient tradition). 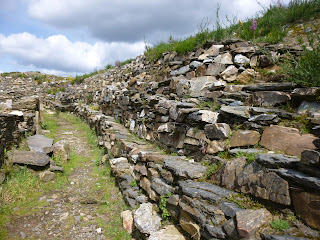 A "castro" was the whole village, with stone foundations and thatched roofs (the thatching being of the barley that grew all around.) The village was surrounded by farmland, but there was only one main entrance into the castro, and there were also storage areas that served the entire castro. Above are some pictures of the ruins were were privileged to wander among.

Below, you can get a good idea of the stone work. The stones in that area are quite flat, not "block-shade" like some of the rock that forms the foundations of more recent (but old) buildings. 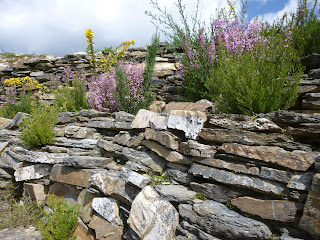 To me, it was awesome to think I was touching stones someone had touched 2400 years ago. But those of you who have read earlier posts know I get "mystical" about ancient buildings. They stir something deep inside me, and make me imagine the past. Our friend, Terri said she could actually "see" (figuratively) scenes in these ancient little rooms. It is amazing to see how they have stood the test of time. The thatched roofs are gone, but the foundations remain.

After our walk-around the castro, we went to another town called Portomarin for lunch. Portomarin is quite charming. My husband likes to photograph old churches, and we were rather captivated by the square architecture of this one right in the center of town. 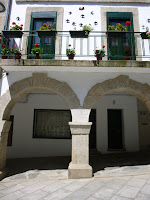 We were also excited to learn that there is another castro closer to us in a village called Fion that we can visit. If we find time to go see it, you can bet we will take more pictures.

How about you? Do old buildings and ruins stir something inside you and take you back to the past? Do you like historic architecture? Do you like to imagine the past when you visit a place?

Posted by Elizabeth Varadan, Author at 9:14 AM 22 comments: