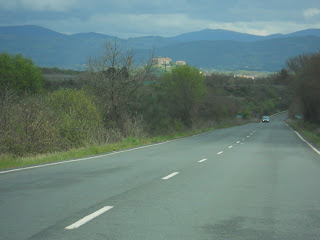 That's how it feels when we return to Galicia; more specifically, to our part of Galicia, the village of Trasulfe. We arrived in Santiago, Sunday, September 8th, around 5:30. Our friends, Terri & David picked us up at the airport and drove us to the village.

After opening the house, we went out for dinner, already on Spanish time,  at 9:00 p.m. or therabouts. (We were pretty sleepy.)  We went to Torre de Vilariño, a really charming cafe/bar/restaurant that we've been to often with our friends, and had champiñones al ajillo, mushrooms sauteed in olive oil, with garlic, salt, and red chile flakes, and truchas, small, delicious, crispy fried trout, served with Galician bread, which we really like so much. I don't have a current picture of Torre de Vilariño, but I will get one to post later.

The next morning, the first thing we did was walk down the hill  to greet all our neighbors, marveling again at the late summer/early fall scenery. You have to admit, those cows look pretty peaceful. 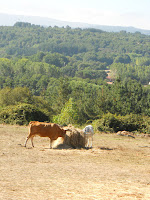 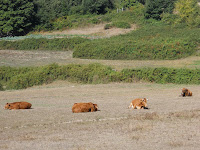 It wasn't long before our neighbors started giving us of their bounty. They are some of the most generous people we've ever met. The first morning Eva gave us eggs and home-made wine. Milagros gave us peppers and tomatoes. Miguel gave us potatoes and wine. A few days later, Eva gave us a huge bag of potatoes and another huge bag of peppers and tomatoes. 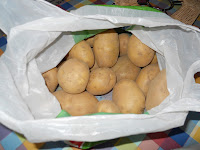 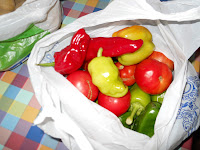 You can see we are going to be cooking a lot of dishes with potatoes, tomatoes, and peppers. And we have had omelets a few times already. I do save some of the eggs to bake cakes for the neighbors in return.

Later, we drove into Monforte, the nearest good-sized city that flanks the Parador, a former noble's castle, part of which was once a monastery. Now the castle is a hotel with restaurants and coffee shops, although its cathedral still is in regular use for worship. The building itself always grabs me. From any angle and any distance, to me it's very haunting. 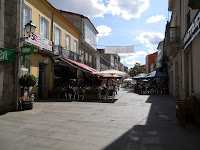 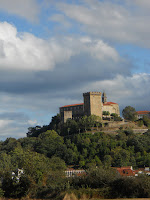 We like to go to the indoor cafe/bar and have either coffee with a crescent tapa or a glass of wine with Spanish olives.

After that, we walked around the main plaza in town, happy that we had such beautiful weather. (When Rajan came in spring, while we were still taking turns with our dog, it rained every day except two.)


Over the week-end, Friday and Sunday, we were busy cooking Indian food for our British friends. Other days we worked at home and then in the evenings we went to the bench to chat with our neighbors. (They chat. We listen. We are getting better at understanding, though, until they switch to Gallego, just when we think we are getting the Castiliano. As a result, we've picked up a few Gallego words, too. )

On Saturday we went into Monforte again, this time to have lunch at our favorite cafe/bar in town, Adega do Carlos. We don't have a good picture of Carlos to share, but you can go to his Facebook page and see how warm and welcoming he is as the owner. (Like his page, too!) We ordered two of our favorite racciones to eat with bread and wine:


You can see how much we liked them: 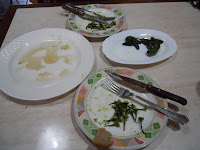 Afterwards I went to have my hair trimmed in a beauty shop in Monforte, called Tempus. I don't have my hair cut often, and never short, just trimmed. But I went this day especially because the grandaughter of our super neighbors, Eva and Manolo, is apprenticing at this shop. Her name is Lucia, and we've watched her grow from an early teen-ager, who would sweetly dance with her grandfather at the fiestas, into a young lady who drives and is planning a career.


We thought she did a very good job. (Please pardon how dark the photo is.) 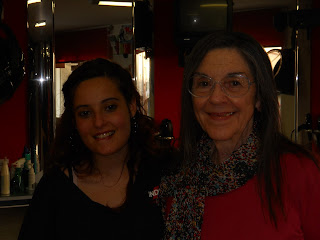 Sunday afternoon we encountered hunters on the road near Antonio and María Elena's farm, using walkie talkies and dogs to track the javalís (wild boars) attacking the wine grapes and rooting for potatoes. This is kinda javalí season. Monday, we learned either 8 or 9 had been killed, five of them near the farm above, the others here and there, but still in our area. No pictures to share, but Rajan is predicting they will show up on menus in the local restaurants.

On that happy note, I leave you for now, but I'll be back with more news and photos later.

Meanwhile, have you ever seen a live boar? (I haven't yet.) What is your favorite snack food? (Racciones always seem like snack food to me.) And do any of you have a good potato recipe?

Posted by Elizabeth Varadan, Author at 7:40 AM 29 comments:

On Our Way Tomorrow

By the time you read this, we will be on our way to Galicia, Spain, to the village and the people that have stolen our hearts. It's a long trip. But stay tuned. I'll be posting about our new ventures soon.
Posted by Elizabeth Varadan, Author at 7:56 PM 8 comments: