Recently I had the pleasure of reading C. Lee McKenzie's new book in the Pete and Weasel time travel series: Some Very Messy Medieval Magic. While part of a series, it easily stands alone as a good read.

Pete and Weasel are eighth grade best friends in the small town of Hadleyville. Pete, a budding wizard, is an orphan and lives with his Aunt Lizzie, one of many witches in this town. Weasel’s parents are scientists, always busy with lab work to the point of nearly ignoring their son. Fanon, an alligator, happens to be Pete’s familiar. Dr. Wraith, is a blend of a supreme wizard and a sort of “Dr. Who”, in charge of passports for time travel, orchestration of various wizard enterprises, and solving problems time travel and magic gone awry can cause.

Magic has gone awry in this fun story: Pete didn’t properly close a time lock in the 1100s at the close of an earlier adventure. Now Peter of Bramwell, a page and the nephew of Earl Minimount, has gone missing in time. Pete and Weasel must go back to the year he disappeared to head off a resultant disaster. On arrival, two guards, Sir Egbert and Sir Alywin, discover the boys wandering around; they decide Pete is the missing Peter of Bramwell and Weasel his servant. They take the boys to Earl Minimount, and since Minimount hasn’t seen his nephew since he was a toddler, he welcomes them in these roles.

Humor, danger, mystery, and suspicion unfold in this romp of a tale: Rumors abound that trouble is afoot in the countryside. Sir Egbert skulks around and sneaks out of the castle at night. And why does he take such a dislike to Pete? The teenage Richard, Duke of Aquitaine stops by en route to France and wants to go on a hunt. Pete is assigned to accompany him. But Pete has never ridden a horse, much less hunted. Then there are the dreaded Dark Woods, a place people inside and outside the castle fear, and the mystical Circle of Stones, where Druids worship. The young duke himself brings new dangers with him. And why does Earl Minimount’s niece, Juliana, Peter of Bramwell’s cousin, seem so familiar to Pete of Hadleyville? It takes the “very messy medieval magic” of the title to resolve these questions and bring the real Peter of Bramwell back to the time where he belongs.

Some Very Messy Medieval Magic, published by Dancing Lemur Press, L. L. C., will be released May 15, 2018 and is available on Kindle and in some Amazon locations.
C. Lee McKenzie is on Facebook https://www.facebook.com/cleemckenzie
on Twitter https://twitter.com/cleemckenzie
and you can learn more about her and her books at her website: http://www.cleemckenziebooks.com/middle-grade/ 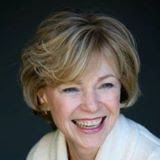 Posted by Elizabeth Varadan, Author at 9:40 AM 8 comments: 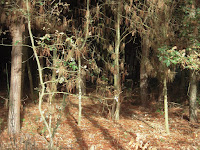 Recently I began working again on a historical novel I started quite a few years ago. The book had bogged down about halfway through, even though I roughly knew how it would end. It came to a screeching halt because one character took on more importance than I had initially envisioned. I knew that character had to be highlighted more and had an important role to play, but it threw a wrench in my story. Between the chapter where she took on a stronger role, and the ending I had in mind, there was a wilderness of how to get from one point to the other. Which way to go? I was lost in the woods. I wrote three other books while I was pondering this.

Then recently I and a friend signed up for a set of 6 workshops/classes that meet about every two or three weeks. With a teacher who gives homework. I decided I was going to pull out this manuscript of old — which was one of my favorite stories, really — and work on it. We've had to do scenes, a log line, character maps, etc. But the most helpful assignment was to do a chapter summary of the whole book. Yep. The whole book. Including the part where I didn't know what was going to happen. The idea was that we should just get through our whole book with the freedom to change things along the way once we started writing it.

Well, guess what? Now I know how to get to my book's ending, and I'm all enthused about writing the new draft. I'm also in love with research for this book again — it involves a lot of research because it takes place in Sacramento in 1919. The family is Irish Catholic. The railroad shops are involved (Southern Pacific). The Spanish influenza epidemic is involved. WWI is involved. Vaudeville is involved. A Model T is involved.

So I've been haunting both the Railroad Museum Library at 111 I Street (right next door to the Railroad Museum) and the Sacramento Room in the Sacramento Public Library, Central, at 828 I Street. In both cases, the archivists are incredibly friendly and helpful, locating booklets, books, pamphlets, directories, etc. for me. Next I plan to peruse microfiches of newspaper articles at the central branch and I'll visit the California Automobile Museum on 2200 Front Street. I did a lot of research at the library and online a few years ago when I was working on this book. And I read numerous books on all these themes. But now I know what I need to look up to build on what I learned before — a lot of questions about details to fine-tune the setting.

Not only that, after not reading it for about 8 years (yes, that long) I rediscovered how much I like this story. I am already four chapters into the re-write.

A few years ago I took a writing class from Sands Hall, and she described a phenomenon called "research rapture".  I'm in the throes of research rapture, now, and I am having the time of my life.

How about you? Have you ever had to lay a work aside because you were stuck and then "rediscovered it?" The chapter summary pried me out of my bog. What was your solution?
Posted by Elizabeth Varadan, Author at 9:42 AM 18 comments:

William H. Johnson, as you can see, has a very stylized approach to portraiture that captured so much life and vitality in the scenes he painted. The painting on the left is titled, Street Musicians. the one on the right is titled, Sowing. So I used some of his paintings (from calendar pictures) to  inspire the students, ages 8 to 12 with one high schooler who is a returning student. (The 7-year-old was absent.)

The students used colored pencils to sketch in their portraits on pastel paper, then did the major coloring with oil pastels. Here is a nice sample of their work: 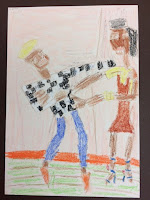 As always, this class is a bright spot in my week, a break from writing on the computer or reading in a chair. I love the interaction with the students. They are attentive listeners, and when they get to work, you could hear a pin drop for the hour that follows the fifteen-minute lesson. They are completely immersed in art. All I have to do is float around and encourage them. And  I always come home refreshed and enthusiastic.

How about you? If you are a writer, do you have a special break from your writing routine that restores and refreshes you for the rest of your week? If an artist, do you turn to some other pursuit to give you fresh perspective?
Posted by Elizabeth Varadan, Author at 8:38 AM 12 comments: