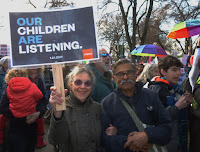 Almost a week has gone by since the march  last Saturday, and two days have gone by since a visit to good reading and writing friends, Romain and Pam Nelsen.

I'll talk about the friends first, and then later in this post add more pictures of the march.

I met Romain and Pam when Romain was a fellow student in a series of workshops conducted by Sands Hall in Sacramento. We were all so sorry when the last class ended. (Hall is a remarkable teacher.) When the series ended, a group of us decided to form a writing group, and we called it ASH. (Alumni of Sands Hall.) Romain and his lovely wife were kind enough to host the group in their home in Davis for a few years, until health problems made hosting difficult. But I and others remember those days so warmly. It was a great group, the critiques were truly stellar, and many of us went on to become published. It was wonderful, Wednesday, to sip tea, eat pumpkin bread, and reminisce about the old days. 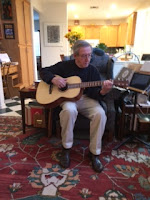 For her part, Pam is an avid reader (she reads her husband's work), and we have found we share a great love of mysteries, among other genres.
Meanwhile, in recent years, as well as being a fine writer of short stories, Ro has gone on to do woodworking. He created the guitar you see in the pictures above. (He can play that thing pretty well, too.)

On to the women's march: Through the years, the Nelsens were always inspirational to talk with about politics. We are much on the same wave length. And they would have been marching if their energy levels were up to it, so Rajan and I marched for them as well as for ourselves. In fact I march for another couple, dear friends in Colfax, who are dealing with some health issues, and another writer friend in Sisters in Crime who was not free to march that day. It was a march to remember, for sure. Several other friends were marching, but the crowd was so thick, we didn't run into them. Organizers had expected 10,000, but over 20,000 showed up! To give you some idea of what that looks like, here are some pictures.
It was also exciting to hear how many marched all over the country and abroad. We go to Braga, Portugal periodically in connection with my cozy mystery.

A friend there wrote that Braga had a march, as well as Lisbon, Porto, and many other cities in Portugal.

But the newspapers reported over 50 countries had marches, and there were marches every continent, including Antarctica. Wow!

Knowing that gave me such a great feeling of solidarity with people in a world that is larger than "Me first!"


How about you? Did you march? Did you have friends who marched? Do you find peaceful gatherings inspirational and energy boosting, or do large crowds make you nervous? If you are a writer, to you have an alternative hobby like woodworking or some other handicraft? What do you do for inspiration?

Posted by Elizabeth Varadan, Author at 10:28 AM 4 comments:

I had mentioned earlier that one of my New Year's resolutions was to write more. Well, I've been scribbling notes for WIPs and new works, but more importantly, I've been submitting work—last week, a picture book and a chapter book. Today, I submitted10 poems to a contest.

On another note, I'm celebrating two good reads: I ordered and have begun to read, Anne Bronte's The Tenant at Wildfowl Hall (which I mentioned in last week's post on my blog next door: Victorian Scribbles). And I'm halfway through Amy Thomas's The Detective and the Woman and the Winking Tree. Expect positive reviews for both in posts to come.

What a pleasure good books are!

Celebrate the Small Things  is a blog hop co-hosted by Lexa Cain at: Lexa Cain,  L.G. Keltner @ Writing Off The Edge , and Tonja Drecker @ Tidbits Blog. (You can go to any of these sites to add your name to the links, if you want to participate. I recommend it, because it's always fun to see news that others are celebrating, and to share your own as well. )

What are you celebrating this week? Did you make New Year resolutions? If so, were you able to start applying to at least one of them? If not, are you somewhat skeptical of resolutions, and do you just go with the flow or wing it each year? Any good reads to share?
Posted by Elizabeth Varadan, Author at 8:14 PM 6 comments:

I expected to have a New Year's post early in the week, but came down Tuesday with a really unpleasant virus. If I hadn't had my flu shot, I would swear it's the flu. I'm on the upswing, so I expect to be back posting next week. Until then, belated Happy New Year and everyone have a great week-end.
Posted by Elizabeth Varadan, Author at 11:19 AM 6 comments: