An Evening of Fado and a Fadista to Remember 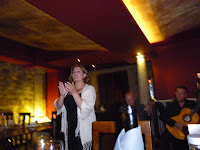 One of the great traditions of Portugal is the unique music called Fado. I first heard Fado two years ago in Galicia, when Maria do Ceo sang at a  restaurant in a casa rural. (I blogged about her singing HERE and HERE.)

My next Fado discovery was the great Fadista, Marisa da Luz, in Braga, Portugal. 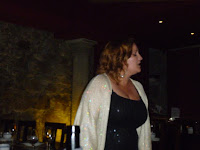 By the time my husband and I went to Braga last year to do research on a book I am writing, we were both hooked on Fado, and we especially wanted to find a place where we could hear it. We lucked out! Mercado das Tapas offers Fado every Thursday evening and a wonderful selection of tapas, as well as that great potato and kale soup called Caldo Verde.

At Mercado das Tapas, various Fadistas perform, but when we went last year we were fortunate to hear Marisa da Luz. We liked her so much that, when we knew we were going again early this month, we requested her. There are many things that make her such a good Fadista: To begin with, she has a beautiful voice with quite a range. But she also pours such feeling into her songs, they wring your heart.

There are cheerful songs in Fado, but the majority of songs deal with life, one's soul, fate. Fado has been called the Portuguese equivalent of American Blues, and to some extent, that's true. But to me the melodies are more complex and take one by surprise. Some tell a story. Some are philosophical. Some simply express the sadness of loss at a high level of poetry. Some of the lyrics are taken, in fact, from the poetry of one of Portugal's greatest and most mystical poets, Fernando Pessoa. Normally a Fadista is accompanied by two or three musicians. One or two will play guitar, and the remaining one will play a Portuguese guitar, which sounds very much like a mandolin.


Fado is an art form like no other, and Marisa da Luz's voice and delivery rise to the demands of it. We predict that she is a rising star Fado lovers will hear of more and more.

She was the main singer of the evening, but three men took turns singing Fado, too, as many Fadistas are men, and this seems to be tradition.

As it turned out, it was Marisa da Luz's birthday, and she was celebrating it with her friends and family. Graciously she shared some champagne with us, and she let us take pictures of the party, as well as a couple of pictures with them! And with her! A very cordial, down to earth lady. 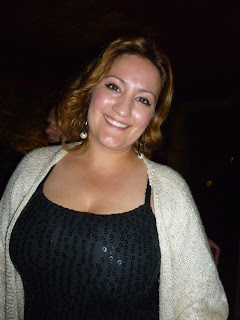 Thank you, Marisa da Luz, for an inspiring evening full of wonderful song.


Next week: Some of our favorite places in Braga, and a wonderful tour guide.

Meanwhile, what is your favorite music to listen to? Have you heard Fado? If so, do you like it?

Time Out for a Book Release!

Today was the big day!

I have so many things to blog about, but:

Here are the links: Imogene and The Case of The Missing Pearls is available from all good bookstores including The Strand Magazine, Amazon USA,Amazon UK, Waterstones UK, and for free shipping worldwide Book Depository. In ebook format it is in Kindle and Kobo and will soon be on iTunes.


Please do check them out.


Meanwhile, please come back Friday for the first of several blogs about the trip to Portugal.

See you Friday, if not before. Have a great week.

Posted by Elizabeth Varadan, Author at 7:47 AM 11 comments:

All We Left Behind, by Nancy Herman

For some time I have wanted to review this wonderful book, but life kept intruding (marketing my own book, travel plans, celebrations of important birthdays, a wedding.)

I’ve read many books about the Donner Party, but All We Left Behind has preyed on my mind like no other book about this tragic event. Told through young  Virginia Reed’s point of view, it traces the trajectory of what begins as a hopeful journey to a promising new life but ends in disaster.

Virginia is twelve when the story opens in Springfield, Illinois the day the family is departing, along with the extended Donner family and others, setting out for Independence, where they plan to meet up with a larger wagon train, the Russell Company. The trip has been James Reed’s idea all along, and he’s the leader of this small group.

The first few weeks of the journey seem like an adventure until they reach Independence, Missouri, and learn Russell has gone on without them. James Reed misunderstood the meet-up date. This is the first time Virginia realizes that “Pa”, her adoptive father, can make mistakes. Despite his autocratic nature, she has idolized him, feeling he can do no wrong. The family is Methodist, and earlier, after she visited a Catholic church with a friend, he made it clear Catholicism was the wrong path. (Virginia has guiltily been hiding the rosary the friend gave her in her pocket.) Now, she wonders if Pa can be mistaken about Catholicism, too.

This is only the first mistake James Reed will make. They meet up with Russell, but later split up, the larger wagon train taking the tried and true path; the Reed and Donner group and a few others taking the Lansing cut-off, a supposed shortcut that will make up for lost time. Reed has misplaced faith in the book by Langford Hastings, but he is a leader type with the ability to persuade, and this leads to one stubborn mistake after another. Reed is also a proud man, traveling with his family in the largest wagon with the most luxurious contents (dubbed later, by resentful fellow travelers, as “the palace car.”)

Before the trip is over, the car’s contents will join the many things “left behind”. Virginia's grandmother dies on the the trail. Another old man is abandoned by one of the other pioneers. All along the way, they encounter household goods, wagon wheels, relics of earlier pioneers who had to leave so much of what they valued behind.

One of the strengths of the author’s writing is the way she shows Reed through Virginia’s eyes: a man of flaws and redeeming virtues. Virginia’s hero worship wavers, but her loyalty never does. In the space of a little over a year, she matures from a pre-teenager torn between homesickness and adventure to a young woman with knowledge far beyond her years.

The author’s setting details plunge a reader deeply into the experiences of these hapless travelers. She has clearly has done extensive research that shows in the authority of her storytelling without ever intruding as "information dump". One of the most haunting scenes is when the Reed family and their three wagons are crossing the Great Salt Desert. They are crossing alone, because the heaviness of the “palace car” has slowed them down and the others have gone ahead. Patty, Virginia’s younger sister spies three wagons in the distance.
“I wonder why they’re so far off the trail,” Mama said. She added in a puzzled tone, “Their lead wagon looks nearly as big as our palace car.”
I waved just as the girl beside a pony waved back. Milt waved both arms over his head in unison with a rider in the other wagon company.
“They’re our mirror images,” he said wonderingly. “Even the horses are identical.”
A slow chill ran down my spine. “You mean they’re us?”
“Don’t look. Don’t look!” Mama’s voice trembled. “They aren’t

The Reeds join up with the others, but before long, things worsen as tempers and egos flair – as of course they would among a group of travelers who once had high hopes but have to deal instead with unforeseen difficulties that terrify them.

As a reader I found myself experiencing so many emotions -- tension, relief, humor, sympathy, even tears – as the writing pulled me deeper and deeper into Virginia’s world. While the story of the Donner party itself is remarkable, the author’s telling of Virginia’s story is equally remarkable. This is a book that bears more than one reading and should have a place in school libraries, both middle school and high school.

Posted by Elizabeth Varadan, Author at 8:19 AM 17 comments: