I certainly hoped to be back to posting about our Portugal trip, but I've been working on Book Two for my series, writing articles, and making school visits for more information for my articles. Then, just when I thought I could post again, our dog came down with another attack of "idiopathic vestibular disease" or "old dog disease." 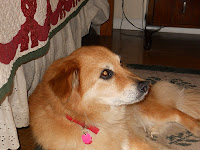 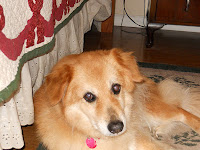 Cezar will be 15 years old in a couple of weeks, and he periodically comes down with these attacks. This was his 3rd (they are happening more frequently), and this was quite severe. Something in his middle ear doesn't function right and his vertigo causes nausea. Consequently, in the throes of an attack, he can't stand without falling down, and he can eat or drink because of the nausea. So we were in and out of the vet's office several times, getting him hydrated and having shots to counteract the vertigo. He's just started eating and drinking on his own again, and yesterday and today he was able to stand by himself and walk by himself, though not very far, and with weaving steps. The odd thing about this disease, is that an attack gives symptoms very much like stroke symptoms, but then it just clears up unaccountably after some days, and he's fine until the next time. And it's something that frequently accompanies a dog's old age.

I hope to be back to posting about our travels and books and writing soon. I do miss it. But first things first.

Till then, hope the writing goes well and look forward to reading your posts in the near future.
Posted by Elizabeth Varadan, Author at 3:22 PM 14 comments:

Back to the Iberian Peninsula!


It's been such a busy time since we returned from Galicia at the end of October. I only managed one post on return, and then there was the announcement of my husband's photo website and contest, announcement of the winner, a friend's book launch, a family reunion in Raleigh, North Carolina, another friend's book announcement, and then Christmas (which was just lovely but where went the time?) All the while Galicia has been on my mind, but I've been pouring my responses to it into poetry. So it's nice to be back to blogging about the place we love so much.

Today's post, however, is about a trip we took with our friends, David and Terri, to Porto, or "O Porto", in Portugal. Portugal is directly south from Galicia and is like a continuation in many ways. If you look on a map, you can see that one flows into the other, and, indeed, Gallego and Portuguese are "sister languages". For the most part, a speaker of one can understand a speaker of the other with very little difficulty.

But when I think of Porto, I remember tiled walls, a feature, I have to say, of any Portuguese city. (We went to a walled border town, Valenca, a few years ago, and were struck at that time, too, by the many artistically tiled walls.) Along every street, whether old or restored, buildings gleamed with colorful tiles. We stayed for two nights, and the day we arrived the weather was overcast, but that made no difference. In sun or mist or rain, Porto is a beautiful and colorful city. 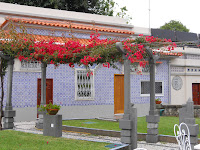 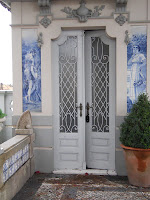 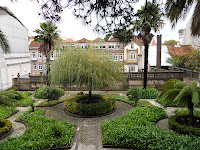 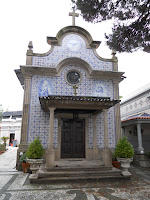 Neither Terri nor I could resist the opportunity in one of the gardens to sit with ancient pharaohs: 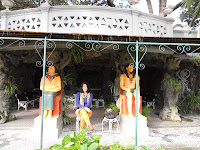 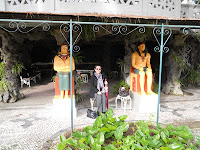 (Do you get the feeling they're ignoring us, though? That's just like those ancient pharaohs!)

The first day, despite overcast weather, we headed down to the river (the Río Douro), where the cafés and shops are. It was a nice walk from our lodgings, ever downward toward the river, and finally down a flight of stairs to the river level and the main wharf area—a convivial sight to say the least, flocking with tourists. Lots of handmade items in some shops. I picked up a few souvenirs there to bring back. 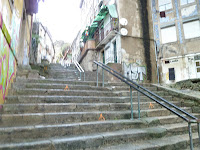 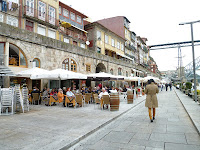 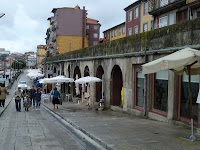 Before returning to Castelo de Santa Catarina, we had a really fabulous dinner at a restaurant close to our lodgings: It was an unbelievable meal, enhanced greatly by one of the servers who had a truly funny sense of humor. Here we are, having a grand old time at O Forno:

After our meal we returned to Castelo de Santa Catarina: And another artistic experience greeted my husband and myself:

And with that, I bid you goodnight for now. Coming up: A wine shop, a river cruise, a school, and a fond farewell to what we will always remember as "The City of Tiles."

Meanwhile, is there anything else you would especially like to know about Porto? I'm so enamored of the trip I'd be more than happy to look it up.