I'm back home now, in Sacramento, and the first thing I noticed in our yard (after admiring the full billowing bloom of our crape myrtles) is that two of our azalea bushes have gone demented and are flowering. We have several azalea bushes in front of the house and in back. Some were planted by the previous owners, and some by us. None of them bloom in late August. All of them bloom successively about two weeks apart (an accidental orchestration, as far as I know) in February and early March.

Before I left for my trip on the 12th, I had a hurried glimpse out of the corner of my eye in the way that you see something and immediately forget what you saw when you are preoccupied with packing, cleaning, and printing off boarding passes. (Is that a... flower on the end of that branch?) But by the time I returned, the neighboring bush had caught on and both are now in full flower.

What is going on? These bushes are too young to be having their midlife crisis. Besides, the older bushes are prudently holding themselves back like they always do, waiting to bloom in season. Maybe these two are simply rebel bushes, making their own statement.

I suppose I shouldn't complain. Who can really mind a splash or two of unexpected beauty?
Posted by Elizabeth Varadan, Author at 2:22 PM 9 comments: 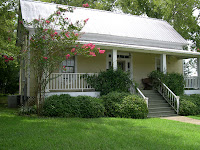 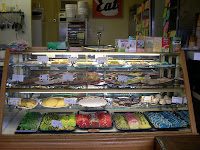 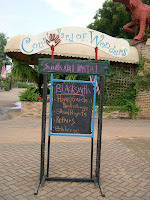 I've been busy writing and exploring. My niece's home and the Alabama Blues Project are actually in Northport, a tiny little town on the edge of Tuscaloosa. When I say tiny, I mean tiny. The historic "downtown" is about 4 blocks long, on Main Street, and is full of antique shops and art galleries. The Alabama Blues Project is a few streets away in an old restored farmhouse (top picture).

Most days we go into the office, and while Debbie and Rick take care of ABP business, I park at a table with my computer and do my own work. (I'm pleased to say I finished a rewrite of a picture book.)

A couple of days I browsed the art galleries on Main Street. My favorite was The Renaissance Gallery (http://www.renaissanceartgallery.com/). I especially liked work by Craig Reynolds, Anne Stickney, and N. Rhodes Harper.

My other favorite place was the Kentuck Art Center (bottom picture shows the courtyard), offering metal work by Steve Davis (http://www.sunheartmetalworks.com/), and pottery by Kerry Kennedy (http://www.firehorsepottery.com/). A little couryard was filled with Steve's sculptures, and when I get home and download my pictures I'll put a few up in this blog. The Kentuck Art Center's main url is: http://www.kentuck.org/. There is also a lovely art gallery and an art museum.

This afternoon I'll be heading home, my camera loaded with pictures for Rajan, and my head full of fond memories.
Posted by Elizabeth Varadan, Author at 5:11 AM No comments:

A Festival in the Middle of Somewhere 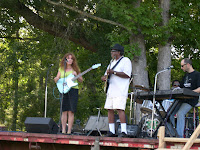 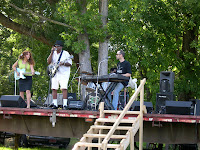 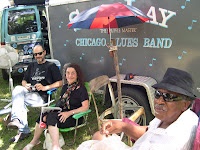 Yesterday I had my second opportunity to hear Debbie's band at a festival way out in the country. Debbie sang and Rick was on the keyboard, but this time they backed Ace Jones, the lead singer and guitarist. Dwane Pruitt played the drums. (Dwayne also played the drums Thursday at the farmer's market gig.)

The drive from Tuscaloosa was gorgeous. The scenery we passed was lush and green -- meadows and pastures with curious cows, stands of forest and woods. The sky was a deep, Prussian blue with piles of cumulus clouds billowing upwards from the horizon. The day was hot, though. The humidity here makes air so thick you could spread it on toast.

The festival took place 20 miles south of Greensboro in a vast grassy meadow with a canopied stage. An outdoor kitchen served some of the best catfish you'll ever eat, as well as fried chicken. Various beverages were available, but, in the heat, we were just grateful for bottles of cold water.

Four bands were scheduled to play. Starting at 4:30,Debbie's was first. They played for about an hour, going from song to song, each having their own moments with riffs and variations. The people who come to hear blues get right into it, making for one of the most attentive and appreciative audiences a musician can ask for.

We stayed for awhile to listen to the 2nd band, who sounded really great. But it was a long drive back to Tuscaloosa, so we finally had to leave. We didn't get home until a little after 8:00 p.m. After a late night supper, we went to bed, accompanied by a different kind of music from the cicada orchestra outside the door.
Posted by Elizabeth Varadan, Author at 2:56 PM No comments:

Funny how things happen: Here I am in Alabama, enjoying all I'm learning about the Alabama Blues Project. Then I find that Kim Davis, the Programs & Office Assistant, just happens to teach Irish Dance. The juvenile I'm currently working on has a character who, in the 1870s, does an Irish jig and inspires a painting crucial to the story.

I have never seen an Irish Jig. Nor did I realize that a jig is a special style whose beat differentiates it from, say, a reel or hornpipe, rather than being a dance genre per se. Kim was able to point me to a video that shows step by step what an 8 hand jig would have looked and sounded like in the time of my story. She is also going to put me in contact with someone who can answer further research questions.

My story character eventually ends up in California, but for my research, I seem to be in "mother lode country" right here in Alabama.
Posted by Elizabeth Varadan, Author at 7:59 AM No comments: 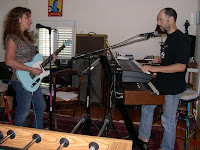 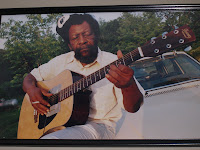 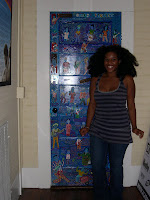 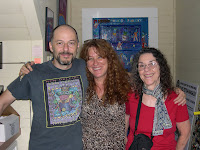 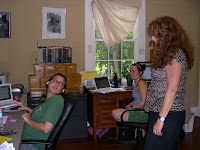 I'm in Alabama now, in the office of the Alabama Blues Project, a wonderful non-profit organization co-founded by my niece, Debbie Bond, and expanded under her and Rick Asherson's co-directorship. The Alabama Blues Project (ABP) is dedicated to preserving and promoting the blues through educational programs, live performances, exhibits, etc. with a special emphasis on Alabama's contributions to the blues. Sponsors of the ABP include National Endowment for the Arts, the Alabama State Council on the Arts, Alligator Records, and Bonnie Raitt, among others.

As a former teacher, concerned that young people get exposure to the arts, I'm especially impressed by the ABP's three-pronged educational outreach:

1.school residencies (including out of state residencies) that expose students to blues history as well as hands on musical instrucion with traditional blues instruments.

2.An after school blues camp one day a week for 10-12 weeks that includes musical instruction, life skills instruction, blues history, and culminates in an onstage performance with known blues artists such as Sam Lay, Homemade Jamz, and others.

There is also an advanced band that has grown out of repeated attendance of these camps, and the advanced band plays gigs of its own at community events and festivals.

In addition to directing the ABP, Debbie has a popular blues band that plays around the state and out of state. She's a vocalist and guitarist. Rick Asherson, her husband, plays keyboard and harmonica. A sax player and various guitarists and drummers fill out the rest of the band. In the past Debbie has played back-up guitar and has sung with Willie King here and in Europe. In earlier days she played and sang with her mentor, Johnnie Shines,and went on a European tour with Little Whitt and Big Bo.

I had the pleasure of attending a gig yesterday at a farmer's market where her band plays regularly. It was an afternoon that I didn't want to end. (It was the first time I had seen one of their performances, and I was one proud auntie.) At one point, Rachel Edwards, a 20-year-old graduate of the APB program came up to sing with the band. She, too, was fabulous. This is a name to watch for in the future.

Meanwhile, to learn more about the ABP, go to: http://www.alabamablues.org/educationprograms.htm#residencies

You'll be glad you did.
Posted by Elizabeth Varadan, Author at 1:12 PM No comments:

I finished it. It did grow one more chapter. But only one. It's done. Until a rewrite is suggested.... That's how it goes.

But, having finished this draft, I can go off tomorrow and enjoy a visit with my blues-singer niece and her husband in Alabama. My next blog will be from Alabama, where I will have a chance to see her perform. I also want to mention her wonderful Alabama Blues Project, but right now I have a million last minute things to do for the trip.
Posted by Elizabeth Varadan, Author at 9:30 AM No comments:

The Little Story that Grew and Grew

I have not been blogging because I've been working on a story I started a few months ago before our trip interrupted it. It's been a surprising experience, this story, in that it has turned into a book instead.

Originally I got the idea as a story for a children, but right away it turned into a picture book. After feedback from my writing group, I addressed things that needed fixing, which made the story grow longer instead of shorter. I decided it must be a picture story book. Then more things needed fixing, which is so often the case in writing and re-writing. It's like jello: You push something in here, something bulges out over there. Again and again, it happens.

Of course, this made the story grow even longer. I think of it as the "little story that grew and grew". It is now a chapter book, 14 chapters long. Who knew?

I'm almost finished with this draft and have every confidence that it won't grow any longer, as the material doesn't really justify a juvenile novel. This is strictly for little kids who read short chapters and like fantasy. But it's been a lot of fun and a pleasant surprise. I'll be looking for chapter book markets next.
Posted by Elizabeth Varadan, Author at 10:08 AM No comments: