The Condo is in Escrow.

No pictures right now, because so much is happening, including far too many winds to go out and photograph the neighborhood.

But we accepted an offer, and now there is just the usual paperwork, etc. — which can be time-consuming these days with all the rules & regulations. Especially new regulations regarding Covid.

But things are moving along. In just under three weeks we clear out the condo and move to a B&B, and on the 21st we board for Portugal. On the 19th we go for Covid tests, because a negative reading is required within 72 hours of boarding.

Between now and then there are the good-byes. (Sniff.) But we are promised lots of visitors once it is Covid-safe to travel again.

I'll post again before we leave, and maybe even with pictures!

Yope you all are safe and healthy and the same for your loved ones.

Posted by Elizabeth Varadan, Author at 10:06 AM 15 comments:

About These Long Silences . . .

It seems my posts these days are punctuated with long silences in between. Life has been so eventful that everytime I plan to sit down and blog about it, something new happens. Originally I was going to post about the beautiful murals around town, you may recall, before I rewrote a new collection of poems. (And believe me, when the obsession to write strikes again after a long dry spell, I seize the moment.) Then there was our anniversary and then Xmas - both wonderful but celebrated indoors quietly.

The poems are finished. Now I have to decide where to submit them. This is a little more complicated than usual, because . . . we are moving to Braga, Portugal. Next month. (February 21st.) And I'm wondering how to submit to American markets from Portugal, and to European markets in English.

I know, I know, we just moved last summer, leaving our home in Midtown of 22 years! But Portugal has been on our minds and in our hearts for quite some time. We started going to Braga in 2014, and we went every year until Covid-19 struck the world. We've talked about moving there soooo many times, then talked ourselves out of it, then back into it, then out of it . . . which is why we decided a wiser move would be to the smaller condo downtown. But Portugal wouldn't let go of us. So we've decided if the desire to move there is going to keep recurring, we'd better just do it. The shippers came last Monday, and Thursday and Friday our wonderful real estate agent and her assistants staged the condo. It's on the market.

So, I was going to write about that, and then the whole "stolen election" drum beat started overtaking the news with the projected march on Washington that culminated in the horrific coup attempt last Wednesday. The National Guard has beefed up  security this week-end and until the inauguration in all 50 states as well as DC. I'm sure that dissuaded planned armed protests, but what happens after the inauguration when the NG troops go home? Are isurrectionists going to vanish in a puff of smoke? I've been hearbroken over this.I never thought I would see such a thing happen in my country. And I don't think the trouble is over.

Not to mention the death toll of Covid-19. It's been hard to think about all of these things and whip out a  cheery post, but despite that last paragraph, I am feeling hopeful.

Meanwhile, the weather has turned into early spring weather here. I took my walk along the river yesterday and families were out. The neighbors next door were having a barbecue and the grilled-meat smell floated over which, vegetarian that I am, doesn't really bother me. In the river yesterday, small boats were out. Along streets, people were raking leaves and weeding their flowers. And today was very similar regarding the leaves and flowers. If you stayed away from the Capitol (which I did), you would never know it was surrounded with Guards and a kabillion police. But blocks away from it, where I walked, two national guardsman were patrolling every federal building I passed. It was surreal. And so sad.

But beauty lingers still, no matter what is happening in the world. That is really what keeps us going, isn't it! So I leave you with pictures of the beautiful murals around downtown. (They are all over Midtown as well, but these are mainly in downtown.) They are also taken in different weather, but . . . better late than never. 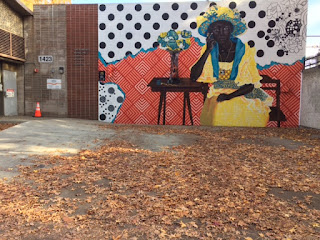 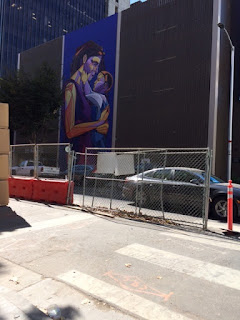 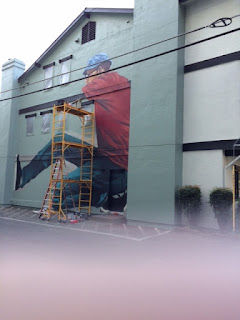 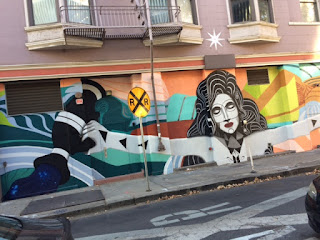 And then there are the buildings. A whole building at "The Metropol," an apartment building, has been painted with scenes: 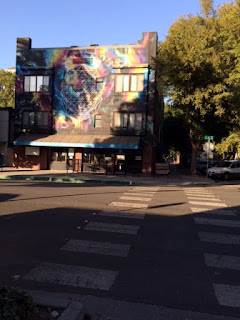 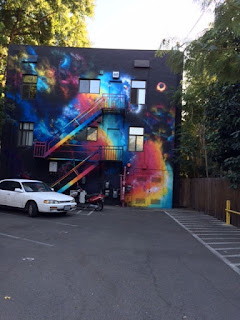 And across from Roosevelt Park on 10th Street, from P to Q Streets, the 10th Street face of an entire residence complex has been painted in a continuous scene. Below are cafes and a cleaners; above are residences: 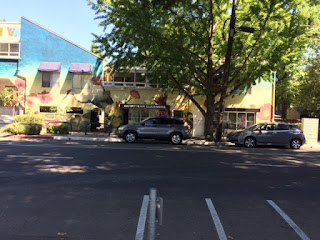 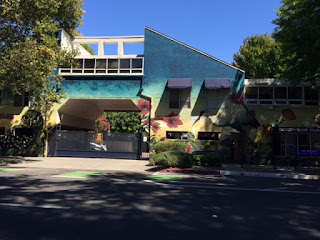 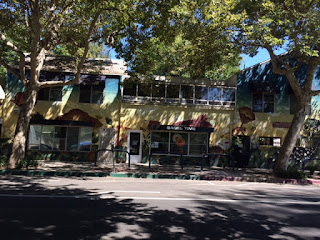 It's quite a surrealistic mural that wanders across the faces of the buildings from one street to the other, but delightful to see.

How has your December/January been? I hope this finds all of you safe and well. What have your biggest concerns have been during this period?