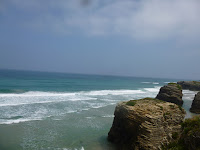 For nearly two months I have meant to blog about a week-end trip Rajan and I took with friends Terri & David and their neighbor, Montse, to a town called Foz and the nearby Praia das Catedrais—"Cathedrals Beach in Galegan." The many stretches of beach are on the coast of the Bay of Biscay, essentially the north coast of Galicia and Asturias, and we actually visited Praia das Catedrais last fall for part of one afternoon. We are drawn to beaches, and this collection of beaches has captured our imaginations. 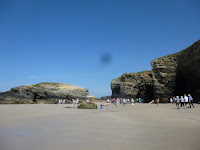 The name "Cathedrals" or "Catedrais" is due to the fact that wind and tides have sculpted the cliffs into shapes that suggest cathedrals. The tides especially have carved out caves that can only be safely entered when the tide is out. Here I am above inside of one of the caves, entranced by the fact that these caves go on and on. You wouldn't want to be trapped inside when the tide comes in. 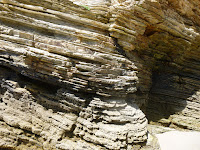 I'm not sure what kind of rock the cliffs were to lend themselves to being shaped so interestingly by the elements. The rock in every case seems in layers and at angles. Simply beautiful and mysterious.

Here are a few pictures that can give you a feel for how deep some of the caves are, looking in from the outside, and then looking out from the inside. 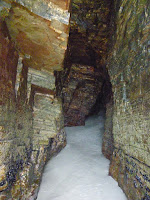 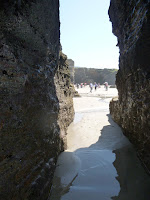 We were also treated to a solo concert by a man dressed in traditional Galician garb who played his gaito (a Galician type of bagpipe) for quite some time. I don't know if he's always there, but he was there the second day we visited, and apparently he's there often enough to earn the moniker, "the Gaitero Galego." 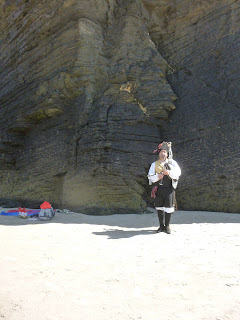 We were able to visit the area two days in a row, because Montse's brother owns a flat in Foz. (It's currently for sale, so it was un-occupied.) Though Foz is now a beach tourist town, it was once a whaling town, so there is a promenade with a breathtaking view to a history center that tells a little of the town's past. Here are some pictures of our little group and a view from the promenade.


There was also a small bird park where I saw black swans for the first time in my life. Swans are perhaps my favorite bird. (Well, peacocks are pretty high up there, too. )I have always thought swans so beautiful, and these were no exception. The light just shimmered off their black feathers. And look at those graceful necks. Naturally they made me think of the ballet, Swan Lake, and Odile, the sorcerer's daughter. 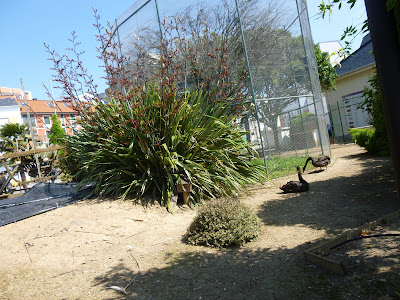 And soon it was time to pack up, find lunch, and return to Monforte and Trasulfe—about a three hour drive. But it was certainly a week-end to remember! Rajan and I want to go back during our next trip to Galicia so he can take some good black-and-white film photos.

How about you? Are you drawn to beaches? Do like swans? Have you ever gone deep into a cave?
Posted by Elizabeth Varadan, Author at 3:55 PM 11 comments: