These are mainly street events that captured our interest as we walked around Braga for three days. In addition to some street performers, there were locals all dressed up and walking around seeing the sights themselves. Then there were the school groups. Lots of them, although I only caught two of them here. 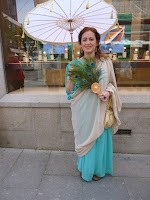 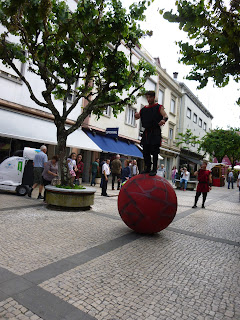 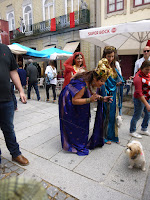 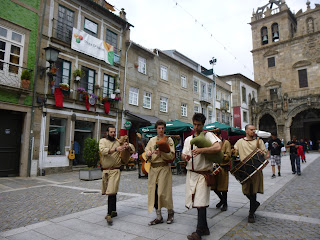 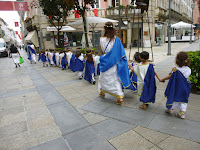 And a couple more performances of interest on stage. The first was dramatic. The second was a musical group.  I loved all the music that was going on. 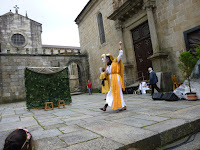 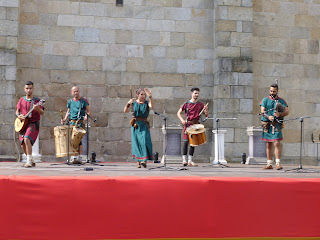 I hope you've enjoyed these last scenes of Braga Romana. Which happenings
did you find the most interesting, performances or street scenes?
Posted by Elizabeth Varadan, Author at 1:46 PM 14 comments:

A popular feature at the Braga Romana Festival is the belly dancing.  Last

You might wonder at a connection between ancient Rome and belly-dancing. Well, it is thought belly-dancing (sometimes called "torso dancing") originated in Egypt, which was part of the Roman Empire, and spread to places like Turkey and Greece, also part of the Empire. So it merits inclusion in this wonderful festival, both historically, and for its beauty as an art form.

It has an interesting history as depicting childbirth and being instructive for mothers-to-be rather than the rather provocative associations given it in cafes where patrons tuck money into a dancers bra. Here is a YouTube showing the beauty of this form of dance. This particular group is called Raksat Brazil, and they are performing in Dubai.

We were struck by how creative and graceful the performances we saw in Braga were. Enjoy the pictures below — first by Radiki, and then by the paired dancers. Each choreography was so unique, and again, so graceful: 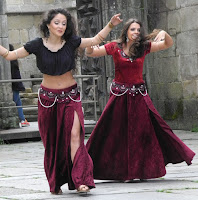 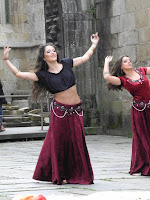 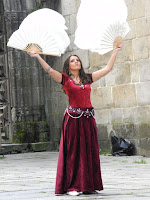 And then the other stage.
First the lady in blue: 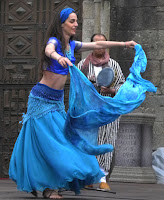 Then the lady in red: 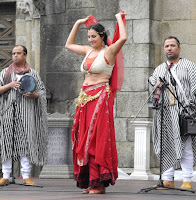 Then the two together:

Don't you just love the costumes? And the use of the scarves?

Have you ever seen belly dancing? Do you enjoy dance performances? Modern? Ballet? Bollywood or the old Hollywood musicals? Hip Hop? Have you ever taken special dance lessons?
Posted by Elizabeth Varadan, Author at 4:00 PM 18 comments: 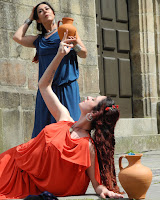 As I mentioned in the earlier post about the military camp enactment, there were many performances going on all over the historic district (the main tourist center) in Braga. Many of them were dance performances. We especially liked this one: a beautifully choreographed dance in several sequences by four "Roman" maidens.

The dancing was accompanied by haunting music performed by three musicians who sang and played special instruments. The group's name is Dorahoag, and here is a YouTube site where you can hear the three men of the group play a very similar sounding piece of music. They create their own music in fusion with other music. Really wonderful.

Here you see two of the men from Dorahoag with a woman who is playing an instrument that — sadly — I can't name: 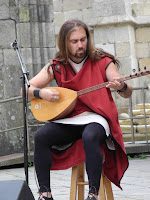 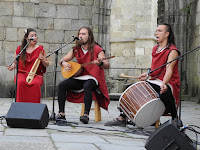 And then the marvelous dancers! You can see such grace in all their movements: 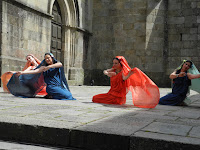 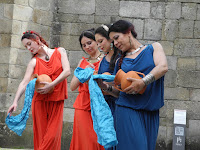 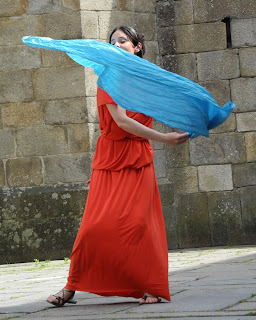 
How about you? Do you like dance performances? Do you like music that fuses more than one genre? What is your favorite music?

Posted by Elizabeth Varadan, Author at 9:21 AM 14 comments: