My Own Cozy News

My other news is that my new cozy, Deadly Verse, will be released in June. The build up begins this month, but my publisher told me to feel free about splashing the cover around, so here you are: 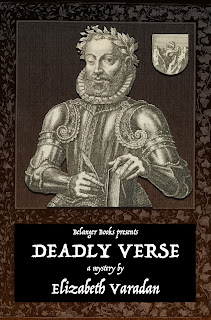 Who is this man dressed up in Renaissance garb who looks like he is winking? Luís Vaz de Camões, a Portuguese renaissance poet and some say Portugal's greatest poet, who is famous for  Os Lusíadas, his  epic poem about Vasco da Gama's voyage to India.
Why does he look like he's winking? He lost an eye when, as a soldier, he fought the Moors. As was not uncommon, back in the day, he was a soldier and wrote poetry. His sonnets are considered on a par with Shakespeare's, Dante's, etc.
What does Camões have to do with a cozy mystery? Well, someone in Braga, Portugal, claims to have an original manuscript of one of his sonnets, possession of which leaves a trail of death. And, you guessed it: Carla is a suspect.
How the heck do you pronounce Camões? Hah! When the book comes out, you'll have to read it to find out. 😊
Gave you read any cozies lately? If you do enjoy cozies, do you prefer mysteries with a travel angle? Historic? Contemporary?
Posted by Elizabeth Varadan, Author at 2:40 AM 14 comments: