Education, the Gift That Keeps on Giving 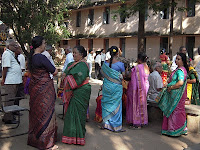 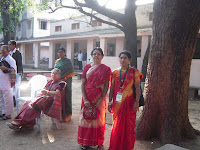 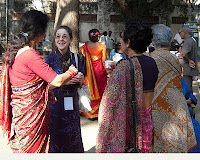 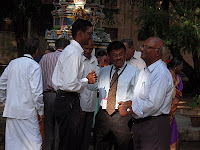 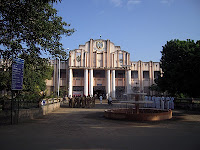 In America, it's a given that we respect education and want students to learn, but I don't think we approach anything like the reverence for education I saw reflected over the days of this reunion. The first day was a gathering of reaquaintance and entertainment for alumni who hadn't seen each other for years, which is pretty much what you might expect from a class reunion. The second and third days were a revelation to me as to how much more this reunion involved.

We met at the alumni association's meeting hall in Chennai for an early breakfast. (7:30 a.m.!) Then we went into a main hall where the organizers of the reunion honored professors who had taught them at engineering college. The professors who live in Chennai and were able to attend were seated in the front row, and one by one they received glowing tribute, and were given flowers, a plaque, and a shawl. (The next morning, in Chidambaram, similar tribute was paid to professors who could attend, and for professors who could not be at either program due to ill health, alumni members went to their homes.) Over and over again, the former students talked about how they owed their success in life to these teachers. How much it must have meant to these professors!

After the breakfast program, we boarded three buses and set off for Annamalai University in Chidambaram. It was an all-day trip, and new and old friends chatted away, or dozed, or listened to re-caps of old musicals played on a TV screen at the front of the bus. Along the way we passed small villages and a number of rice paddies. Midway we stopped at Pondicheri, near the beach and ate lunch at a hotel restaurant. (All of this had been provided for by the alumni association.) Pondicheri has a famous ashram, but we did not have time to explore, as functions were planned for our arrival in Chidambaram, and we were pushing a deadline.

When we arrived at the university's engineering college, the dean of the engineering college was waiting and shook hands with each of us as we got off the bus. Oil lamps were lit on leaves in the center of the entrance to the compound where we were greeted by 50 young women engineering students holding oil lamps. 50 young men engineering students in the honor guard (similar to our ROTC)were smartly dressed in uniforms and red headdresses, and they stood at attention as we proceeded into the alumni quarters entry hall, while a young woman passed out roses to each of the women in our group.

As part of their homage to the university, the alumni association had transformed a series of former classrooms into a large conference hall with special lighting for future conferences, and a dedication service was planned for the following day. For now, we filed in to look at it, and then proceeded to the guest house dining hall for tea and treats, then were given the keys to our rooms.

The "rooms" each couple were given actually constituted a suite, complete with a sitting area, a large comfortable bedroom, a dressing area and bath. On a table beside the bedside was a basket of fruit, bottles of water, and a coffee pot. After depositing our bags in our rooms, we met at the buses again and were whisked off to the Chidambaram temple.

Chidambaram's great temple has four main gateways enclosing a courtyard, each one topped by an ornate goparam. The central shrine in the courtyard houses the Nataraja, or "Dancing Shiva". Depictions of the statue have been featured in numerous art books and philosophy books -- Shiva dancing the universe into existence, surrounded by a ring of flames. It's one of the most ancient shrines in India. A ceremony was still in process when we arrived, and the deity was so covered in garlands, I could only see its face and the extremities of its limbs, but I was happy to have the opportunity to see it at all. We were allowed to go around and up a step behind the shrine, where a priest blessed us and another priest gave us ashes, red powder, and a beautiful green and gilt shawl. After that, we walked around inside the courtyard until time to return to the bus. As we were departing, we heard cymbals and drums. At the entrance, I looked back and saw a procession with the deity being carried around the courtyard.

At our rooms, we freshened up and went to supper in the guest house dining halls. The founders of Annamalai University came from a region called Chettinad, a region with a special cuisine, and the current administrators brought in Chettinad cooks to do all the meals while we were there. The food was fabulous.

Following supper, we all walked over to the campus music building close by and were treated to a musical concert performed by teachers from the music college. The instruments were a flute, a violin, 2 drums, and an instrument called a nadhaswaram (which looks like a elongated lily and has a reedy sound something like a saxaphone). The music was quite hypnotic and beautiful. At times the flautist and violinist went went solo, the violin sounding like a human voice. The drummers had their moment, too, and periodically two music students rang bells when all the instruments played together. After such a long and eventful day, once we were back at our quarters, I fell immediately asleep.

Then at 6:20 next morning, a coffee team came door to door to help each of us meet the new day with a good strong cup of Indian coffee. After a quick shower, Rajan and I met the others at the buses and were taken to the main campus dorm building mess hall for breakfast. Then came the inauguration of the new seminar hall. Following that, in another hall, tribute was paid once again to former professors who could attend, and the vice chancelor and the dean gave tribute in turn to the alumni for their many contributions.

Here are just a few of those contributions: Earlier in the year, several alumni had come to the college to give workshops to current engineering students, cluing them into special problems that need addressing in today's world. They plan to come back and keep giving seminars to help today's students connect with the world they will be working in in the future. The alumni association also awarded a scholarship to be given to a female engineering student. The association donated a water treatment system to a secondary school, and an English language program to an elementary school. Members of the association planted 50 trees in front of the university to encourage ecology and they arranged for a blood donation drive.

After the morning programs were over, photographs were taken. Then we had a choice of attending one of four lectures (one for each engineering branch: mechanical, electrical, civil, chemical) or having tea and socializing some more. We chose the latter and took some pictures of our own and exchanged addresses, etc. And then too soon, the reunion was nearing its end. We returned to the guest house for a delicious lunch, and then it was time to board the buses for our departure. It was close to 3:30 by the time we were on our way, with a stop for tea in Pondichery. It was 10:05 p.m. when we reached the alumni hall in Chennai. A taxi (ordered by our sister-in-law) was waiting for us and took us home.

The three days of this reunion stand out for me as a fine testament to education and friendship. Everyone had such a great time. There were over 100 people, and everywhere I looked were smiles and laughter. And I made some new friendships I hope to keep in years to come.
Posted by Elizabeth Varadan, Author at 1:21 PM

I'd take that over a Facebook reunion any day. Sounds delightful!

What a nice write-up on that reunion. Good photos too. I wish I could've attended it though I generally dislike reunions.

George
What Recipes Don't Tell You