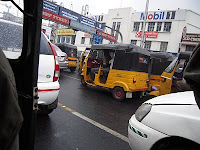 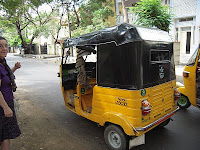 Traffic in Chennai deserves a post of its own. Like all major cities in India, people flocking in for opportunities have flooded the streets with traffic they were not meant to serve, despite upgrades, road widenings, and lane markings. On my first trip to India, the traffic reminded me more than anything of an immense game of "chicken", where opposing teams composed of trucks, autos, auto rickshaws, bicycles, motorcyles, taxis, all rushed toward each other at top speed, daring the other side to blink first. A friend of my husband's described it this way: "In India, we drive by intuition."

True, that's how it seems. To take a ride in India is to truly live in the present moment. After awhile, I learned to simply relax and just take it all in. Those drivers do know what they are doing! They have incredible skill and dexterity, as they veer to avoid some vehicles, swoop in front of others and miss others who are trying to do the same.

In Amercia, honking your car horn is a display of irritation--often of road rage. In India, it's crucial to survivial. It's imperative for everyone to know everyone else's intentions. Consequently, a trip through Chennai seems like listening to a cacaphonious symphony written by a crazed composer: horns, beeps, toots, blats, jangles, whistles, and bicycle bells are all accompanied by the percussive rumbles, coughs,grunts, growls, and put-a-put-puts of motors. Even with all of that, there are moments of gridlock, where no one can move. And it is not unusual to see, in the midst of assorted vehicles, an ox-drawn cart moving along, placidly. At such times, traffic just seems to magically part and flow around it, then rush on.

If time matters, or if you hope to have presentable hair on arrival, it's probably best to take a taxi. But I prefer the auto rickshaw. The auto rickshaw is a boxy little metal vehicle with two wheels in back and one in front, a vinyl top (like on old convertibles), and a windshield that wraps around the dash. Passengers in back are separated by a bar (handy for holding on) from the driver, who navigates with handlebars similar to those on a motorcycle.

The auto rickshaw, open-sided, and low to the ground, puts you in a "you are there" mode as you watch the city rush by, burning itself into your retina, leaving after images: Brightly painted mansions next to delapidated buildings; gardens and parks with coconut palms, neem trees, nettu lingam trees, flame of the forest trees, bougainvilla in all colors; women in bright saris or salwar kamiz, their silk and chiffon-like shawls flowing behind them as they walk; fruit and vegetable stalls and peddlars with blankets heaped with wares; coffee kiosks, and deep,rectangular caverns of shops; cows and goats running loose on side streets; dogs, both pet and stray, sunning themselves in front of gates; corner shrines with ornate sculptures. And over it all, a permeating heat.

I can never get enough of it when I'm there. And, when I return, for weeks afterwards, some small thing will trigger a moment of plaster compound walls, mosaic tile floors, banana trees, the scent of jasmine, and it's all there for me again.
Posted by Elizabeth Varadan, Author at 11:31 AM