Pongal and an Eclipse 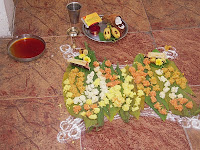 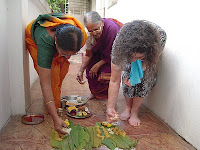 A few days after our arrival (and a few days before the reunion) celebration of Pongal began, on January 14th. Pongal is essentially a South Indian harvest festival. In the villages it is celebrated for four days, but my relatives in the city mainly celebrate the first two days.

The day before Pongal, special pots were being sold in the market place. I saw stacks and stacks of sugarcane and turmeric everywhere. That same day, people also set out old and useless things they wanted to discard and burned them. The air was thick with smoke and an ashy smell most of the morning.

On the first day of pongal, a special rice and dhal dish (called, in fact, pongal), was cooked in one of the special clay pots I mentioned, and it had been decorated in a special way with sugar cane, bananas, and turmeric. This is a home celebration in each household -- there's no public parade, and it's essentially to give thanks for the harvest.

The second day is usually to give thanks for the cattle in the rural areas. Farmers paint the horns of their cattle in brilliant colors, decorate them with garlands, and prepare special food for them. In the cities it's a brother-sister day. Sisters give thanks for their brothers and say prayers for them, and brothers give their sisters small gifts. The first two days are the main festival in the cities. (I never did find out what happens in the villages for the last two days.)

We had spent the 1st morning of Pongal at Rajan's eldest brother's home. Later that afternoon we visited a nephew across town. Madras is such an immense city, and traffic is so thick, such a trip can be time-consuming, so we stayed overnight in order to combine it with visits to other relatives living nearby. The next morning, I was included in the sister-brother ceremony, so I've posted that in the pictures above.

Later in the morning, we visited a niece and Rajan's 3rd brother, where we enjoyed a fantastic breakfast; then we went to an artisan center where hundreds of stalls showed lovely handicrafts. (We did a lot of shopping for souvenirs to take back!)

That was also the day of the solar eclipse, and during the eclipse hours, we stayed inside our relatives' home to watch it on the news. In parts of Southern India, the complete eclipse could be seen, and the photographs onscreen were remarkable: This was an annular eclipse, and you could see the ring of fire around the perfect circle of the moon that was blotting out the sun; something I've never seen before. One can understand how old superstitions arose from phenomena like eclipses. This was truly awesome.

A little later, we headed home, but not before and polishing off another scrumptious tiffin!
Posted by Elizabeth Varadan, Author at 3:52 PM

That is so interesting. I love how the Indian culture is so land and nature focused- everything to do with the living and the land.
Our forefathers brough these traditions to South Africa and depsite the lack of a 'harvest' at Pongal time we still visited the temples to commemorate-
Great post Elizabeth :)
xx Tee