Sad News and Memories of a Good Friend & Neighbor


I'm going to take time out from book and publishing concerns to pay tribute to a friend whom my husband and I will deeply miss. We received the sad news Friday from our village neighbors in Trasulfe (Galicia, Spain) that our mutual neighbor, Manolo, had passed away, and that the funeral would be Saturday. That has come and gone. If we were there, we would have gone. As it is, we can only send a card to his family, and then, on our next trip in August, go immediately to visit Manolo's widow, Eva, who has become like family. That is how we have always known them: Eva and Manolo. We have never even found out their last names. We first met them 14 years ago in spring of 2005, right after we bought the house. By our fall visit of 2005, we were friends enough to have them over to our house for snacks before leaving. Manolo looking devilish; Eva looking sweet and shy. 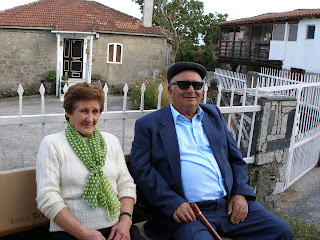 And they've always had a touch of elegance about them. This picture was in fall of 2006, when they returned from the bank in Monforte, taking care of some business. They kept a small garden and did some farming, kept vines, and, when we first met them, had a horse, a pig, and some rabbits. But they always dressed smartly for town.

Meanwhile, it became a regular thing to have them over for meriendas a couple of days we left to come home, and during our visits, we spent many a fine evening enjoying bread, cheese, and Eva's superlative home made wine in their galleria or in their dining room, where we sometimes watched comedy shows in Galegan on TV.
At the end of the day, we would often take a walk down the road with them, and then sit on the bench at the end of the lane, listening to all the village gossip in a mixture of Spanish and Galegan. 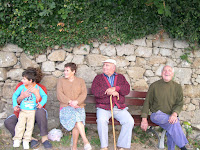 What happy days these were! In the first picture, Antonio (down the road) is on the right, laughing, and his wife, Maria-Elena, is holding their grandson, Daniel, in front of her. This was in fall of 2007. Daniel is college age now. In the second picture, The woman on the left is Raquel, Eva's sister.

This is how I like to think of them — so full of gentle humor and genuine good will for other people. Always full of laughter.

We used to go to fiestas with Eva and Manolo, too, and also to a couple of the ferias for pulpo (octopus), a great favorite in that area.

One of my sweetest memories of them is at a fiesta when their teen-age granddaughter, Lucia, danced with her grandfather. She doted on him. Above, next to the picture of Eva,  is a picture of Lucia a few years later (2013), after she finished beauty school and was a hair stylist.  (She had just finished trimming and styling my hair.) She was a beautiful teen-ager, but you can see she has grown into a beautiful young woman. In this picture she is in her 20s. (How time does fly.)

Then ill health set in, first for Manolo, who gradually had a combination of heart problems, diabetes, partial deafness, partial glaucoma. Before things got to such dire straights, he had difficulty walking uphill, and then later, walking very much at all. He was still able to make it to our house for meriendas in fall of 2008. But gradually, he stayed inside all the time, and by 2014 he only came to the window. 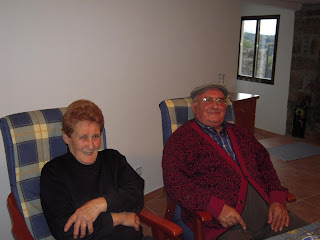 Meanwhile, Raquel contracted a lung disease that incapacitated her, and she moved in with them. So, Eva became the caretaker for a sick husband and a sick sister, which pretty much confined her to the house, as well. They had help come in, provided for by national health, but Eva was still his primary care-taker. I stopped taking picture of them. They all looked tired and worn out, and in recent weeks, Raquel was mainly bedridden.

Instead, we would go over and spend our free time with Eva and Manolo late in the afternoons, sitting in their galleria, discussing weather, the view, little things about life, just to keep them company. Sometimes I would take cakes, because — ever the gracious host, no matter how ill — Manolo would want us to sample Eva's wine.  On our last visits, four and five weeks ago, he could only whisper, asking Eva to get us some wine. We would head her off and tell her no, we didn't need wine, and she needed to sit down and rest. By then, he would be asleep again in his chair by the window and we would be mainly there for Eva.

We will miss him. Eva is devastated from what our mutual neighbors tell us. They were married over 60 years, and she had been taking care of him for nearly ten. RIP, Manolo. It was truly wonderful to know you. And it still is wonderful to know Eva, whom we will visit as soon as we return.

My condolences. What a wonderful tribute to a fine man, who will be sorely missed.

Thanks for stopping by, EC. And thanks for the condolences. We really feel the loss keenly, having spent so much time with them over the years. Have a good day.

What a lovely tribute to a special man. How sad you couldn't be there for the funeral.
Kia kaha.

Hi, Donna; It really IS hard to lose friends. Some friends do feel almost like family. Thanks for the hug, and thanks for stopping by.

Hi, Kate; I really felt he wasn't going to be there on our next trip, and it made me sad in advance. We definitely would have wanted to be there at the funeral and to give Eva moral support. Luckily, her daughters and their families were there, and other neighbors and friends. They were well known through all the nearby villages.

Oh so sorry to hear about the loss of your good friend! They look like a delightful couple.

Hello, Karen, thank you for coming by. Yes, they really were a delightful couple, and then, as health problems set in, we felt so deeply the long, enduring quality of their life together.

Hi, Sandra; Thank you for the condolences. He really was a wonderful character. We will miss him.

Their memory is your mutual gift. Thank you for sharing with us.

Thank you, Mirka. It will be such a different visit the next time we go. Thanks for stopping by.

Hello Elizabeth!
I am writing because, as you are, my family and I are in love with the Ribeira Sacra and, specifically the Pantón area. We use to stay in my uncle’s house in the little village of Galegos, near Torre Vilariño, where, as you do, we use to have lunch when we are there. Perhaps, we have coincide there without knowing it!
The last time we have been to Galegos has been last Halloween (no better place for it than Galicia, the land of the Santa Compaña (the Holy Company), and other legends of witches and ghosts as you may have known!).
And then it was when we discovered Trasulfe. And in Trasulfe, your house. I have to confess that we took two pears from your pear tree and a quince. But we didn't touch the two mushrooms in the meadow!
Looking about Trasulfe on the internet, we have seen that your house is for sale, and, also, that you are its owner (I recognize that I have been reading this blog and your Facebook account: very interesting).
It would be a dream for us to buy the house. It is where we would like to see our 10 year old son spend the summers and contemplate the most beautiful autumn in the world. Unfortunately, the amount in which it is valued is out of reach for us. I don't think we can exceed a total of 60,000 euros. Will it be possible to make a deal? In any case, hopefully we will coincide in Galicia in the near future and you can visit us at my uncle’s house in Galegos, where you will be more than welcome.
All the best!
David.

Hi, there, David. Or David F. I'm glad you like our house. I'm sorry you did not leave a last name, since there is no way we can look up your uncle in Galegos the next time we go to Galicia (mid-April to Mid June). Your price is way too low, but our price is negotiable. If you come back to read this, since you have been reading my Facebook, please private message me more contact information. Have a great day.