Planting Season Is Here, and So is Physical Therapy

I'm posting some pictures of the pedestrian/tourist part of Avenida da Liberdad. I had posted some earlier, last March, shortly after we arrived. This is what it looked llike then: the planting had been done in the winter and similar plants were in various gardens around the historic area of Braga. 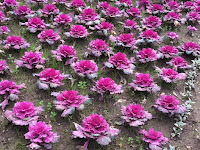 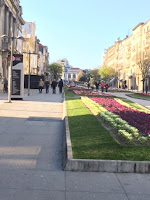 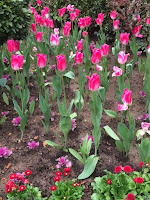 Then in late spring the city planted the area (and areas) for summer. Here is what it looked like then: 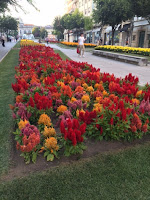 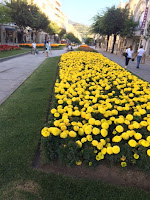 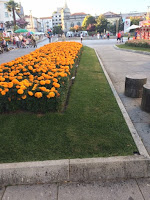 And now the city is preparing flower beds all over for the new winter plants. Again, this is what Avenida da Liberdad in the historical area looked like this afternoon: 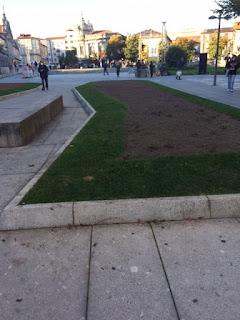 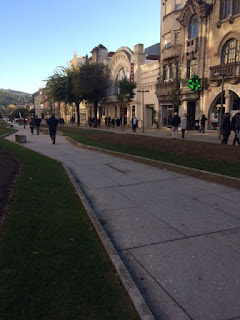 I can hardly wait to see what they will plant. Stay tuned.

On another note, I may have mentioned that 2 months ago (approximately) I fell at night and injured my shoulder. Nothing was broken, but a ligament was torn and after more x-rays and ultra-sounds and an appointment with a physical therapy consultant, my physical therapy program started this Tuesday.

I've had three sessions, an hour or a little more each, and they were fascinating. I was expecting someone to raise my arm, move it back and forth, or something like that. Much like what the PT Consulting doctor did. Instead, there were five phases. First a machine administered an electrical analgesic through two pads, one on each side of the joint. After about 20 minutes, different pads were placed and for about 15 minutes a deep tissue massage was administered, again electrically. After that, an ointment of some kind was externally administered to the area of the tendon and surrounding muscles to regernerate the tissue. That's right: It regenerates tissue. That was followed by a manual massage of all the surrounding muscles and tissue. Last, I was given a rubber strap to pull between my hands in three sessions of 10 pulls.

That was Tuesday. Wednesday I did that and then raised a lightweight pole in three sets of 10 times. I did both those exercises at home Wednesday - no PT because our language lesson occurs at the same time. Then I had PT again today, with a new exercise: pressing a rubber ball the size of a toy soccer ball against the wall, and then rolling it in circles. I had to do that with both hands, to keep building up the muscles. Altogether there will 15 sessions. I do have to say, already my shoulder feels much better.

Here you see my PT "home equipment." The briefcase in the back holds my binder of Portuguese language lessons. 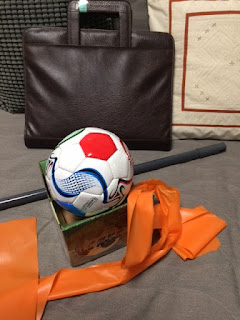 How about you? Have you ever had to have physicall therapy for an injury? If you have a garden, do you plant different plants for each season?

Posted by Elizabeth Varadan, Author at 11:24 AM

Your physical therapy sounds amazing, and very different to the sessions I have experienced. I am so pleased it is working for you.
And yes, I do plant different things in the garden to take advantage of the seasons.

Good morning, E. C. Thanks for stopping by. It certainly is a learning experience. As for the planting, I'm glad there are so many garden areas here in Braga, because I do miss my garden in Sacramento. We had a backyard full of flowering bushes and a couple of fruit trees. (Sigh.)

I've never had PT, but a friend has who I took when she couldn't drive due to her injury. It was NOTHING like what you got. It sounds like this might be a better solution than what they are putting us through in the states.

I put some mums in the ground last weekend, but I'm not sure they will live.

Yes, and it hurts like heck! I hope you're doing okay.

Elizabeth, I do have a friend in Sacramento (my former neighbor) who says her shoulder PT was like what I described. I wonder if that is something recent. As for the mums, I know that Kansas has colder winters than Sacramento, but our mums were pretty rugged. They kept coming back every year and even had two seasons (which may be due to the milder temperature. Good luck with your mums.

Donna, I'm sorry your PT hurt. So far I'm doing okay, although I've only had three sessions, and each one includes a new exercise. So . . . we'll see. :-)

I've never had PT but yours sounds really thorough. Hope you make a fast recovery.

Thanks, Natalie, it does seem to be healing well. I am just so happy that it doesn't look like I'll need surgery. The recuperation is so much longer. Have a great week.

Pretty pictures. Thanks for those. Yes, I have had PT, but I've never had an appointment that lasted an hour. Nor did I have any treatment other than exercise. It sounds like you are getting really good care. I hope it goes well.

Hi, Rosi, yes I am very grateful for the good care. I can really feel the difference. I'm glad you liked the pictures.