A Concert by Singer, Armando Prada 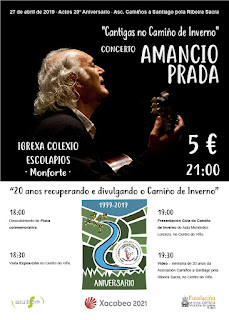 Thanks to our friend, Mila Garcia, we heard this remarkable singer in concert last night at the Escalapios (where a lot of concerts take place in Monforte.) He sets to music poetry by Galician poets and then sings and plays the accompaniment.

You can go to YouTube (link here) for a sample of his singing but click to midway, as at first he starts off quoting the poetry and giving some background to it — all in Galegan or Castiliano — so unless you are fluent in either, you won't understand. (Although, his speaking voice is mesmerizing and is a true storyteller's voice. It can pull you in, anyway.)

But do click to halfway through to hear his singing.

This particular song — from a poem by Rosalia de Castro, a 19th century Galician poetess — is one he sang last night.

He also sang two beautiful songs taken from poems by Federico García Lorca. One that especially moved me translates as "Nocturne for a Dead Youth".

We bought a CD for him to autograph, which we did very graciously. 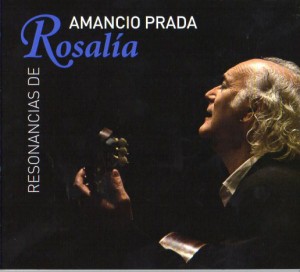 The whole CD is of poems by Rosalia de Castro, and the songs are very haunting. She was born (and died) in Santiago de Compostela, so is definitely the poet for the area, although she is famous in Spain and worldwide.

I would love to post a picture of her, but am nervous about copyright in the US, so I will direct you to two sites that have pictures of her, one of which also has samples of her beautiful poetry.

Wikipedia (which has a really good picture)

Do you like music from other countries? Do you prefer singing or instrumental? Who is one of your favorite artists?
Posted by Elizabeth Varadan, Author at 4:29 AM

What a beautiful singing voice. I really enjoyed this, Elizabeth. Wonderful tribute to a great singer.

BTW, I seem to have missed your Springtime in Galicia post. Even with rain, it's still a beautiful area and a very intriguing photo of the Parador.

What a treat for you.
Words move me more than music does. Much more. Music is largely a closed book to me.

Hi, Elizabeth. I'm glad you like the music. I was just amazed to hear him. He reminded me of a combination of Fado, 60s folk singing, and even some chanting. He's very unique. The CD we got is really good. Thanks for stopping by. Glad you liked the Parador photo, too. I love that building. Someday I'm going to write something about it. Don't know what yet.

EC, that really isn't so unusual. Some people are also much more moved by visual art, too, than music. And words, of course, paint pictures, so sometimes they go hand in hand. Music seems to touch a different part of the brain. I've heard music compared to mathematics. (Ironic, for me, as I am not particularly good in mathematics, beyond arithmetic, lol)

How wonderful! And what a treat to get to see him sing live! I love music in other languages, especially to write to. The lyrics don't distract me and the vocals become another instrument.

Wow, Kate, that is such an interesting idea. I never thought of whether the lyrics wouldn't distract me. I'll have to try that. Thanks for stopping by.

I love fado and flamenco and Garcia Lorca's poetry. But I rarely listen to music, preferring audio books. Odd, that. I'm not a fan of background music -- if I'm going to listen to music, I want to really LISTEN. In the old days, I would have liked to be stoned to really listen.

What a neat experience this must have been, both the music and the poetry. Thanks for sharing :-) And it might be fun to find Rosalia de Castro's poetry and see what kind of work she's written. Translated of course!

Kenda, that's the next thing I want to do: May 17th is coming up, in Galicia, thats El Día de Las Letras, (Day of the letters). I'm hoping I can find a bilingual edition of some of her poems in one of the bookshops in Monforte. I was really moved by the fragments I read on the blog I mentioned above. How is your own poetry coming along? Did you complete your April challenge?

Hi, Vicki, thanks for stopping by. I have to be careful about listening to music for the reason you mention. Music pulls me in a lot, meaning, I get involved with the music I'm hearing and stop doing anything else. As for Fado (which Rajan and I both love), at times, Armancio Prada's singing reminded me a little of Fado — Fado with a twist. :-)

Wow, it was beautiful. And so haunting!

Glad you liked it, Nasreen! I'd love to get more of his CDs. Apparently he focuses on Spanish poets and sets their poetry to music.