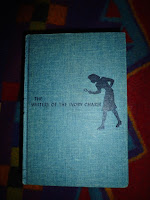 Yesterday after lunch, my husband and I took a little trip to 57th Street Antique Row, a cluster of shops in town that sell antiques and/or second hand things. (The latter is what draws us, as we can't afford genuine antiques and would feel like we had to walk on eggs if we had them in our home.) We like old things and the histories they suggest, My husband loves old cameras and I love old books, so we are always on the prowl for those. Yesterday I struck it rich: One of our favorite shops on Antique Row is The Picket Fence, and that's where I came upon a whole set of Nancy Drew mysteries for $5.00 each. Not only that, the store was having a 30%-off sale, so I emerged happily with four books that came to a total of just under $14.00.

These are the original Nancy Drew series, too, the ones I read when eleven, the ones published between 1930 and 1959. You can see in the example above the old blue cloth cover with a silhouette of Nancy and her Sherlockian microscope. It's true what they say in the publishing industry: kids "read up". I checked every adventure I could find from the public library when I was eleven. I wanted to be Nancy Drew--enterprising, clever, fearless, able to handle whatever difficulties emerged from the crises that had a way of finding her. No matter that she took trips to faraway cities with her friends and drove a car--obviously not only a teenager, but in the high teens at that--she inspired me to start my own detective club and search for mysteries everywhere.

Being eleven in the fifties, and white, I was also oblivious to the racism embedded in many of the stories. In the sixties, revisions of the old mysteries and writers of new adventures started to address the racism and have continued to do so ever since. This was a much needed change for a series so popular. Popular literature not only reflects culture; it influences culture as well, giving attitudes the "okay" at a subliminal level where they seep into a reader's unconscious and take up residence. So I applaud the decision.

Sadly, though, in the series since 1959, Nancy's character has been watered down, a change that makes no sense to me. While subbing in a friend's classroom a few years ago, I picked out a fairly current Nancy Drew mystery from the classroom library and thumbed through it over lunch. This was not the Nancy Drew I remembered--spunky, adventurous, fearless, ready to take on what mystery she encountered. Instead I found a sort of "Oh, no!" Nancy, just short of a hand-wringer in the face of trouble. In an era of heightened awareness of social issues, including women's issues, what went wrong when so much was going right?

Here's what I would like to see happen: Keep cleaning up the racism and bring back the spunky Nancy Drew, the girl detective who inspired young girls for decades to believe they were smart enough to handle life.

I haven't read a Nancy Drew book in years, but I have fond memories of reading them back in the 70s and early 80s! Yes, bring back the quality. There's no need to water them down.

My childhood home was lined with books. Of course Carolyn Keene, Victor Appleton, Arthur Winfield, Clarence Young, were well represented in the shelves and I read them all. So did my neighborhood friends in the 1950s and early 60s. But my favorite adventure reading was Edgar Rice Burroughs and H.G. Wells. It was a fun time for young readers!

Stephanie, I read one yesterday, and i could see why they were such a draw. Every chapter ends with a cliff hanger, and while sometimes her heroics seem a little improbable (to an adult) she was an exciting heroine to follow.

Geo. my brother was into Edgar Rice Burroughs. Congratulations to you on being a Carolyn Keene fan. (i didn't realize until I grew up that Carolyn Keene was really a group of ghost writers.) Have a great day and Happy New Year.

I read all the Nancy Drew mysteries when I was young and loved them. I don't remember racism in them. I will have to find an old one and read it. Now you've got my curiosity piqued.

Hi, Rosi, when I read them way back when, I wasn't aware of racism in the stories, either. But it wasn't blatant. It was the subtle variety. In the book I read yesterday, a young boy from India is referred to as "the little brown boy" and he speaks a generic pigeon English that is stereotypical of non-European foreigners in books of the day.

That said, Nancy herself had good attitudes, and the adventure was a fast-paced, exciting mystery that reminded me all over again why I wanted to be Nancy Drew. :-)

I loved Nancy Drew, but my fav was the mysteries by Eric Wilson. They were usually based in Canadian setting and they made me feel like I was on the adventure. What a great find!!!

Hi, Tanya, I just looked up Eric Wilson mysteries, and at his website you can read the first three chapters of one of them. I can see why you liked his books so much. Interesting characters, and this one (Santa Bieber) starts right off with a mystery to be solved.

My mom and wife both love Nancy Drew:) I liked the Hardy Boys and Boxcar children as a kid, but as an adult I definitely prefer Poirot or Matthew Scudder novels for mystery/detective fiction:)

Hi, Mark, and Happy New Year. My brother liked the Hardy Boys, too. And I'm an Agatha Christie fan, both for Miss Marple and Poirot. I've never read the Matthew Scudder novels. I just now looked him up and see he's a fictional character by Lawrence Block. I haven't read Block's books yet (but now I'll look into it.) Ironically, though, years ago I read either a book or an article by him on writing, and I recall it really motivated me, although I can't remember the actual title.

Happy New Year, Elizabeth! You really scored with the Nancy Drew find. I did some research on those books for my latest mystery novel. A fellow writer and I disagree on her age in the stories, 16 or 18. I'm wondering if the age changed from the original print run in 1930 and the reprint in 1959.
Best wishes for a terrific 2016.
Hau'oli Makahiki Hou.

Awesome luck, Elizabeth! There was a series I read as a kid in the early 70s that had a small group of teens that solved mysteries. I've tried for years to figure it out but have never had any luck. I also enjoyed Nancy Drew and the Hardy Boys as well, and even Encyclopedia Brown.

Hi, Todd, thanks for stopping by. The series you read might have been the Three Investigators series by Robert Arthur. Similar to the Hardy Boys, but different, too. Check it out, and good luck. It's really satisfying to re-read books you liked long ago.

Hi, Gail, Happy New Year to you, too. The age might have changed. I remembered her as younger in some of the first books (The Mystery of The Old Clock, for one), and in one of the books I picked up last Saturday, she seems closer to 19 and already has a reputation as a detective, as if it's her recognized profession. I also noticed that the writing caliber isn't the same in every mystery--something that I wouldn't have noticed at eleven. Some ghost writers were better than other. :-)

What a find. And I'm surprised they are watering down her character. It seems like we go more for strong women in our characters today.
I grew up reading horse books. I read every one I could get my hands on. But I can remember the blue bound Nancy Drew series at my grandmother's house. So either she or my mom was into them. I'm guessing my mom.

Hi, Sandra. Yes, a good find. I'm tempted to go back and get more of them!

I recently reread several of the original Nancy Drew mysteries I'd loved as a girl. I couldn't get enough of them back then. I didn't remember any racism but sure do love the spunky "Miss Drew".

Hi, Karen, thanks for stopping by. The racism is subtle, and I didn't catch it way back when, either. But I did and do love spunky Nancy Drew. She was much more interesting than the current portrayals. Have a great day.

Antique shops are so much fun. You make me want to visit one now. Unfortunately, I was not a reader when I was a child so I knew nothing about Nancy Drew, until I became an adult and discovered how much I enjoyed reading. Trying to catch up for lost time now.

Nancy Drew mysteries were among my favourites way back when. Of course, it's been years and years since I even picked one up. Amazing the themes you miss when you're reading as a child.

Thanks for stopping by, JL. You'r so right. When you are young, you go for the story, and Nancy Drew adventures were favorites of mine. Now that I'm reading them again as an adult, the storyline is great, but there are passages that make me cringe. When I was a kid, those passages went right over my head.

Hi, Beverly, I think you would really enjoy an antique shop. To me, they suggest so many stories. A rich environment that suggests personal histories and days gone by. Thanks for stopping by.