The Cruise - Part One

As I mentioned earlier, my husband's business partner planned an 8-day cruise to celebrate 20 years of the business. The cruise began in Quebec City, Canada, And we set out on Friday, hoping to have an evening visiting with friends before the cruise left the following afternoon. On leaving QC, the ship would travel along the St. Lawrence River, stopping at Prince Edward Island, Sydney and Halifax in Nova Scotia, Bar Harbor, Maine, ending in Boston in time for us to catch a flight home. It was a wonderful time for all. How could it not be when organized by our fearless leader, Ernie Pucci?


Getting to Quebec City was an adventure, however: In Washington D.C., just before boarding time in the evening, our connecting flight to Quebec City was cancelled. By the time we worked out standby status for the next morning, it was past 10:00 p.m., too late for taking taxis to and from a hotel with only toothbrush packets from the airline and no change of clothes. We decided to sleep in the airport. Long story short, we got on the standby flight and arrived at QC a little after 1:00 p.m.—but our luggage didn't. After lunch with friends and a quick shopping trip to buy a change of sweaters and some toiletries, we boarded the ship and went to our cabin, hoping our luggage wouldn't be chasing us from port to port. Never did a hot shower feel so welcome!

Afterwards, we spent the afternoon and evening socializing with friends from far and wide (this is an international company) and catching up with news. Unfortunately I didn't get any pictures of the first evening, but Rajan and I had signed up for a shore excursion in Quebec City the next morning, a three &1/2 hour trip with two stops: The Shrine of Sainte-Anne-de-Beaupre (I've mentioned before that Rajan loves to photograph old churches and cathedrals) and Montmorency Falls, at a breath-taking height above the Saint Lawrence river.

First the Shrine of SainteAnnede Beaupre: Quebec City is a very Catholic city. Most of the churches are Catholic. I was used to seeing churches dedicated to St. Mary, but this was dedicated to Mary's mother (Jesus's grandmother.) The shrine is in a village of the same name about 23 miles northeast of Quebec City. The church was first built by shipwrecked sailors—sailors often became shipwrecked off a nearby island on their way to QC and Sainte Anne is the patron saint of sailors. It has been a major pilgrimage center for 350 years. The church has been re-built many times, since early versions were of wood and easily burned down. This one looks here to stay, though!


There was also a monastery, and a gift shop, but the major thrill was seeing this incredible building, inside and out.

We entered the building through doors that had intricately worked copper-bronze panels. 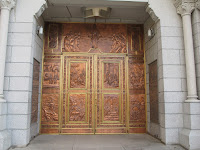 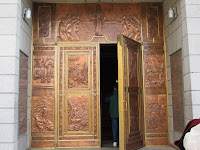 Inside, we saw one wonder after another. Truly overwhelming beauty at every turn. Everywhere we looked, we saw mosaic tile work, stained glass, gilt pictures depicting stations of the cross, and statuary. 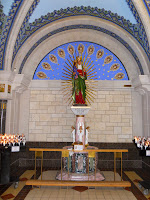 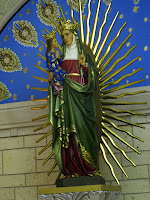 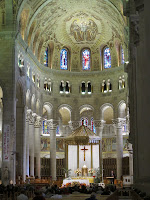 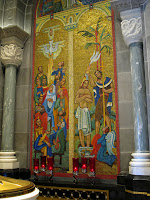 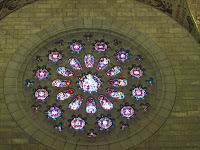 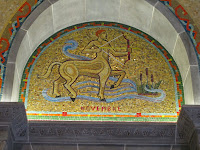 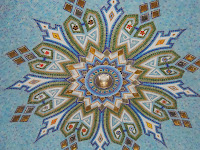 Downstairs was the Immaculate Conception chapel with a statue of Mary, a low-ceilinged room compared to upstairs, decorated pale blue, studded with golden stars. In a special alcove we saw a  replica of the Michelangelo pietà that is housed in Saint Peter's basilica in Rome. 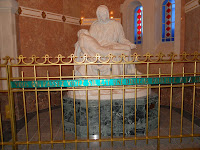 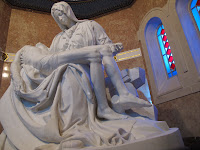 I am not Catholic, but religious art moves me. In an age when art could only take religious form, the artistic spirit worked wonders in stained glass and marble and stone, and this replica captures the beauty.

There were other highlights of the shrine, but there's not enough space in one post to show all of them. So. On to  part two of the excursion—Montmorency Falls.

Montmorency Falls is roughly 7 & 1/2 miles (12 km) from the heart of Quebec City. It is 270 feet high, 98 feet higher than Niagra Falls, although not as wide. It is a remarkable force of nature to view up close, as you can see.

The bus stopped first at the Manoir Montmorency, an elegant former mansion that now has a restaurant, a bistro, and a gift shop. Then we walked up a slope until we came to the recommended point to see the falls above.

There wasn't enough time to go inside the manoir and take tea, or to walk across the suspension bridge or take the tram down to the river and back. But I'd love to return for the tea. (Not too crazy about heights.)


To get a better view of the park surrounding the falls, we returned by way of a lower boardwalk. You can see how beautiful the scenery is. And then, at the little gazebo, from which I took the long shot of the manor, my husband also took a picture of the rock on which the viewing points are fixed. We were on a platform below those!

Whenever we were on the bus, our guide, Jacques Baillargeon, did a wonderful job of informing us about life in Quebec. Before this trip, I had heard of the French-speaking part of Canada, but I naively assumed French was a second language for locals. Not so. French is their first language, and their English has a pronounced French accent—although Jacques is quick to point out that they don't think so in Paris. He kept us entertained with stories of his visits to Paris, where every time he tried to ask questions in French, he was encourage to speak English. "Movies from Quebec are subtitled in Paris," he quipped.
All too soon, the excursion was over, although an afternoon and evening of socializing and fun lay ahead on board the ship. Meanwhile, should you decide to go to Quebec City, I would heartily recommend Jacques Baillargeon for your guide (jacquesbaillargeon@hotmail.com), and Autobus Laval for your tour bus.

Meanwhile, stop by my other blog HERE to learn more about my free giveaway of The Fourth Wish
(good middle grade fantasy that takes place over winter holidays.)

Posted by Elizabeth Varadan, Author at 10:56 AM

You can tell from your beautiful photographs that the trip was extraordinary. As always, thanks for sharing your amazing travels on your blog!

Thanks, Victoria. For every picture on this post, there are about three others. It was so hard to pick.

It sounds like you had a fabulous time . . . what is your husband's international business? I am curious to know. You are so cosmopolitan, and I am so provincial. ;)

Hi, Cathy, He's a design engineer for a company that makes pumps. I seriously doubt you are provincial! And we weren't always travelers, only mostly in recent years. The cruise was a pleasant surprise.

Wonderful photos. Those doors! So gorgeous. I'm not Catholic either, but they do have great architecture, don't they? :)

Hi, L. G., I loved those doors. It would be lovely to have at least one panel like that on a building. It wouldn't have to be religious, but it could be a scene. What workmanship!

I've heard Quebec City is a marvel. And it sure looks that way from your photos. (My husband loves cathedrals too--gothic, neo-classical, etc., you name it and we've got photos of it.)

Wonderful trip and the photos are exquisite! Thanks from this armchair traveler :)

Hi, Connie, thanks for stopping by. Yes, Quebec City is incredible. All the buildings look like variations on castles. Because of our overnight in the airport, we didn't get to walk around in the city and really see it, but that is definitely on our list for a future trip.

Catherine, I'm glad you liked the photos. I'm an armchair traveler, too. There are so many places I would like to see, that I know I won't get the chance. I'm hooked on reading travel blogs now.

Elizabeth, got your message on FB and checked it out. I can't find where there were any changes that would keep you from commenting. Thanks for trying--it's probably just a temporary glitch.

What a lovely trip. Thank you for sharing these terrific pictures.
I really enjoyed this post, Elizabeth...

Hey! I know those places! I remember standing in front of that statue in awe when I was a teen. Welcome to my country. Of course I live in Saskatchewan which is far from Québec, but French is a huge part of our lives here, too. We boast that we aren't French or English speaking, we are both. 100% French, 100% English! Enjoy your trip!

Tanya, that's right. I forgot you live in Canada. I've been to Banff and Vancouver and Calgary, all cool places. But I was swept away by east coast Canada. The whole trip was fantastic. (Prince Edward Island and Nova Scotia - so much history in all three places.)

Oh, wow! What a trip that must have been! I've toyed with the idea of taking a cruse, but I have a slight aversion to big boats. I'm fine with small boats, for some reason. :)

David, my husband isn't thrilled to be off land, either. As for small boats, we had to get into a tender at one stop. (I'll post about that later.) You realy felt you were in the water.)

What a wonderful trip. I love all the photos!

Glad you liked the photos, Kimberly. There are more to come.

Your trip sounds so wonderful, Elizabeth. And what wonderful photos. Thank you for taking us with you!

"In Washington D.C... We decided to sleep in the airport."

Mitty Aunty- Sounds like an amazing trip.
We are only 20mins from the airport. You could have given us a call and had a comfortable nights rest.

Great picture of Ernie, Liz, and Anthony. I rember Ernie's goofy smile from my brief time in the PV family