Below you can see us standing on the top of the wide wall that surrounds the original Lugo, an old Roman wall with arches entered via a cobbled street. These openings are remnants of the higher part of the old wall, much of which is gone now. To stand here is to have your feet firmly in the past. 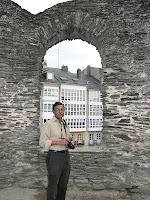 Here we are, still in our first week in Galicia, and it has felt jam-packed. We arrived Monday evening, late. It was midnight before we got to bed. Then we spent the first couple of days opening the house, vacuuming and dusting, etc., and unpacking. Thursday we met friends in town at our favorite café bar in Monforte, Adega do Carlos, and yesterday we went to Lugo and stayed overnight for the San Froilán Fiesta.

The festival actually goes on for eight days, and yesterday, Friday, was the major religious day as San Froilán is the patron saint of Lugo, and the second day was the actual saint's day. Lugo is an ancient city about 60 miles north of Monforte, and it has both a Roman and Celtic past. (Well, for that matter, you can say that of all of Galicia: a Roman and Celtic past. There are old Roman bridges with arches everywhere, and the culture is both castiliano and galegan .)

What's fascinating about Lugo is that the center of town—the original town—is enclosed in a circular wall with about 17 arched entrances; a wall so thick it's wide enough for a car to drive atop, although only walking is permitted. Inside the walls are the old crooked cobbled streets, replete with restaurants and café bars, as well as two cathedrals and several plazas. Once we drove in and found the closest parking garage to our hotel, we unpacked and headed out to stroll the plazas and listen to music. Because it was the saint's day, all the clothing shops, etc., were closed, although eateries and bakeries were open.

Around the Plaza Mayor two huge stages were in preparation for the evening orchestra/bands.  But the ayuntamiento (council building) flanks one side of the Plaza Mayor, and the municipal orchestra of Lugo was playing excerpts from Tchaikovsky's Swan Lake, as well as music by Rodrigo and other composers. Really lovely to listen to. Walking down one of the narrow streets, waiting for lunch time (2:00 p.m.), we heard strains by Mozart floating from a restaurant's open doorway.

We are vegetarians, so sometimes it's hard to find restaurant food in Spain, but, luckily we eat fish and seafood. So we had a really tasty lunch of croquetas bacalao (codfish), grilled prawns, and—a real adventurous "first" for us—steamed cockles with lemon. My goodness, they were good. They looked to me like tiny versions of clams, and they had that "ocean" flavor that was quite evocative. Along with wine, of course.

After lunch, wandering around, we found a band in rehearsal at the Plaza Santa Maria. They were playing all the traditional Galician music with traditional instruments. Their orchestra was composed of four harps, four bagpipes, four violins, six tambourines, one huge set of drums and a smaller drum, and about eight "lap" organs with handles, as well as castanets and a mouth instrument that was "twanged".  The music was haunting and beautiful, and sometimes sounded Irish, and sometimes sounded Greek, and sometimes sounded Spanish. Just fantastic. Later, around nine p.m., after a picnic dinner in our room, we heard the concert all over again and enjoyed it just as much. Then, at 10:30 p.m. we returned to the Plaza Mayor to listen to another Latin orchestra. We sat and enjoyed that until nearly midnight, and then returned to the hotel and went to bed.

After rolls and coffee at a bakery this morning, we walked along the shopping areas (and I did find a nice belt and scarf.) We returned, then, to the "artesian" tent, where local artisans were showing their beautiful handicrafts. And then we headed back "home" around noon.

Weather-wise, we have been lucky. Except for rain this morning, and not a heavy one, it's another beautiful sunny day. And now, I must wrap this up. I'm at a wi-fi café, and I want to post this before we return to the house. Later, I'll try to post some pictures.

Meanwhile, for us, Galicia is a magical place. I write poetry about it at times. Before we started coming here, McKinley Park in Sacramento used to affect me that way. Do you have a place like that? If so, where?
Posted by Elizabeth Varadan, Author at 8:45 AM

It looks lovely, Elizabeth! My magical places usually involve forests - however, Europe would probably work too!

Forests, yes. Think how many stories take place in a forest!

How beautiful!! As a fellow vegetarian, I also had trouble eating in Spain but the country was so beautiful I would go back again and again. Love the pics!

Sounds like a wonderful trip. It's really interesting to visit places where you can see glimpses of the ancient past juxtaposed in amongst the modern. The equivalent in the UK would be places like York and Bath - they have a great atmosphere.

Catherine, thanks. It's always nice to share this wonderful experience with others.

Rachna, yes, we are. Glad you enjoyed the post.

Saumya, yes, food is a challenge for a vegetarian if you don't eat fish or seafood. Luckily we can, but even then, we have to pick and choose carefully when we go out. But the neighbors here are so lovely and kind, and the people so open-hearted. Every time we come we feel so happy.

Nick, that's true. I've been to Bath and just loved it; I spent nearly a whole day there. I'm longing to go to York, too. It's on my bucket list.

Elizabeth, thaks for sharing that magic spell with us. I really enjoyed it and I look forward to the pictures. I can't be there with you but now I can't wait to listen to Tschaikovky's music...I did not know all that about Galicia. Very interesting.

This sounds soooo wonderful! You make me want to go travelling again!

Julia, Galicia is a very interesting part of Spain. We didn't know anything about it before we came, but apparently there's a strong Celtic past here. They actually have cultural exchanges with Ireland.

Lynda, I never realized how much I would love traveling. My family moved quite a bit when I was growing up, so I never thought I would. Now I just love coming here, and also going to India with my husband to visit family. It makes for such a wider world.

Beautiful. So much inspiration to pull from at a later time :-)! Grandfather Mountain in NC, USA is one of those places, for me. Nice post--thanks for sharing :-)

What a beautiful place. I'd love to explore it.

I would think it would be hard to be vegetarians when traveling.

Theresa C: I love the name "Grandfather Mountain". Just reading it makes me feel it's a special place.

Theresa M: You would love exploring it. It never gets old. As for being vegetarian: it's easier to travel than it used to be for sure. But, luckily we eat fish and seafood and cheese. Our diet would be super limited if we didn't.

Oh I could hear the sounds, taste the food and I so want to enjoy the magic. Sounds wonderful. The magic is, you never know when a place will make you feel that way.

Tanya, you are so right! There are places right in Sacramento that feel magic to me.

I love Spain! Thanks for sharing the pictures!

Michelle and Lydia, thanks for stopping by. I love Spain so much, especially Galicia. That's the only part of Spain I've seen outside of the Madrid airport. We keep thinking we will go see the tourist cities like Madrid and Barcelona and Seville, but actually there is so much interesting history right here in the northwest corner of the country that we drive all around here instead. But one day . . .