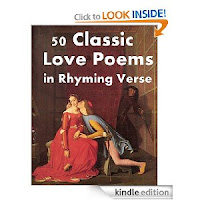 50 Classic Love Poems in Rhyming Verse is a lovely collection of love poems edited by Gary Gauthier, who maintains two blogs: Literary Snippets (his main blog), and Illustrated Haikus. I was the happy winner of this exquisite little ebook, described at the Amazon site as a work “for romantics who enjoy rhyming verses.” Well, that's me. I have always loved poetry—rhyming verses, haiku, free verse, you name it. But reading through this collection reminded me again how much I love the sheer music of rhyming verse when it's done well.
Gauthier’s book is divided into six chapters, and each is about a different aspect of love:
Chapter one, Carpe Diem* (Latin for, “seize the day!”, a quotation from Horace, Oxford Dictionary)
These four poems describe the changes wrought by time brings and the brevity of the present. Some are more cynical than others, but the one I like best is Thomas Moore’s “Believe Me If All Those Endearing Young Charms,” a poem of assurance that while beauty fades, love endures. The poem was set to an Irish air, reminding me again that good rhyming poetry is musical. (Indeed, I heard that song sung many times when I was growing up. I’ve always loved it.)
Chapter Two, Love’s Obstacles
As you might guess, the ten poems in this section are all about why love can’t last or how it is thwarted in some way. Robert Burns, Andrew Marvell, William Shakespeare, Walter Savage Landor, Richard Lovelace, Percy Bysshe Shelley, John Donne, Robert Frost, and William Blake all have their say. But the one that moved me the most was Landor’s poem, “The Maid’s Lament.” A young woman grieves a man she spurned while he was alive, but realizes she loved him now that it is too late. The reason I like this poem is that it has such an intricate rhythm pattern—an abrupt, shortened second line in each couplet that renders the loss more keenly.
Chapter Three, Sonnets of Shakespeare
These thirteen sonnets run the gamut: advice to marry in order to pass on beauty; love and loss; intimations of mortality; the steadfastness of true love. I have to admit, though, I find the sonnets tough going, partly due to the formality of the structure, and partly due to the the language of his day. The combination makes for some dense reading.
Many pithy lines I’ve heard quoted through the years, though, still move me by their elegance:
“Shall I compare thee to a summer's day? Thou art more lovely and more temperate:”
“Let me not to the marriage of true minds admit impediments.”
And here and there, many single lines are simply beautiful:
“Bare ruin'd choirs, where late the sweet birds sang.”
“Death's second self, that seals up all in rest.”
Who else can express such ideas so eloquently?
In general, though, I found these sonnets the most challenging read in this collection.
Chapter Four, Love’s Aspirations
These eight poems express more than love’s aspirations. They show love in a state of passion, of longing, or even of transcendence— sometimes obsessively, sometimes humorously.
The sweetest one, Ben Jonson’s “To Celia,” is one I remember from when I was a teen-ager entranced with love poems. This, too, has been set to music, and most people who read poetry would recognize the melody of the opening lines, “Drink to me, only with thine eyes, and I will pledge with mine.” What I never knew was that the original poem was by a Greek poet and Jonson merely translated it into English. (Maybe I shouldn’t say. “merely.” Who among us today can translate Greek poems into English?)
In contrast, I had to chuckle all through Theodore Roethke’s adroit poem, “I Knew a Woman.” Consider these lines:
“Of her choice virtues only gods should speak,
Or English poets who grew up on Greek
(I'd have them sing in chorus, cheek to cheek.)”
- or -
“She moved in circles, and those circles moved.
Chapter Five, Declarations of Love
Two of my favorites poems are included in these eight: Elizabeth Barrett Browning’s “How Do I Love Thee? Let Me Count the Ways,” and Robert Burns’ “A Red, Red Rose,” (a traditional Scots song set to music by Burns). Also I enjoyed the truly beautiful “At Last” by Elizabeth Akers Allen about love that has come to the speaker late in life, and Anne Bradstreet’s, “To My Dear and Loving Husband.” (The title speaks for itself.)
Chapter Six, Love’s Secrets
As the title suggests, these seven poems deal with love’s secrets in a variety of contexts—unspoken love, unrequited love, forbidden love, etc. Sara Teasdale’s opening poem, “I Love You,” is about an undeclared love taken to the grave. Thomas Campbell’s closing poem, “Freedom and Love,” suggests that love’s real secret is that love never lasts. (Thomas Campbell, shame on you! I bid you read Anne Bradstreet and Elizabeth Barrett Browning!)
But Gary Gauthier has done a masterful job of selecting these works. This is a book to be reread many times and treasured. You can find other books edited or authored by him at his Amazon page.


You can also learn more about him and follow him at: Google Plus, Literary Snippets (where he's hosting a fellow guest blogger from the Life List Club today), Illustrated Basho Haiku, and his author Facebook page.

Posted by Elizabeth Varadan, Author at 7:50 AM

What a delightful prize, Elizabeth... I too am a romantic who loves all forms of poetry! This is a lovely and unusual recommendation on a kidlit blog. Gracias!

What a lovely prize, Elizabeth. This sounds like a great collection.

This sounds wonderful! I might get this for my hubby for Valentine's Day :)

How wonderful. I love poetry too.
X

Glad you liked the review, Joanna. Actually, I may branch out in my reviews and interviews in the future. I write for children and for adults, and there are too many times when I read a good novel or book of poetry and want to respond to it. I don't really feel like having two blogs. (One keeps me busy enough!) Next week I'm having an interview with a nonfiction writer, since many fiction writers sometimes have to do research.

Rachna, it IS a great collection, well worth purchasing. In fact, I was thinking of purchasing it on Kindle before I won it.

Jess, it would be the PERFECT valentine gift! Great ida.

Richard, glad you liked the review. And I think you'll find his website and blogs interesting. I love the "literary snippets" and the paintings; and when he blogs, usually has something thought-provoking to share.

Michelle, since you love poetry, this is definitely a book you'd enjoy.

I think your review is very thorough and it sparked my interest in the book. Thanks Elizabeth! I am glad to be following your blog.

Very nice review, Mitty. Congrats on winning a book that put such a nice smile on your face!

Elizabeth, I couldn't imagine keeping up with two blogs! Makes so much sense if you write for adults too, to sometimes include posts pertinent to them.

Actually next Monday's post on my blog is adult focussed, which is rare for, but fits my round the world them!

Hi, Julia, and welcome. I'm glad the review sparked your interest. If you like rhyming verse, it's a keeper.

Thanks for the good wishes, Rosi.

I love poetry too! It's so great at capturing emotion. I think my favorite poets (of course children's poets) are Dr. Seuss and Shel Silverstien, but I also enjoy Jack Prelutsky and Douglas Florian. I also like e.e cummings.

I've never seen a review of a poetry book before. This was thrilling to read. I'm going to flag it for my mother, the poet in the family. I might get it for her for her bday!!!

Ooh, I LOVE poetry. My favorite poet is Tennyson-- I actually included some snippets of his In Memoriam in my current WIP. Thanks for sharing this book!

Got to love those Shakespeare sonnets. I memorized a few and had another read at my wedding. All good stuff:)

Tanya, this would make a great present for your mother.

Sallee, I'm intrigued that you are working I Memoriam into your WIP. This makes me want to definitely read I your WIP and revisit In Memorium.

Mark, how cool to have a Shakespearian sonnet read at your wedding.

It's always wonderful to read a good review of a collection of poems. Thanks for sharing this.

HI, Cynthia, and welcome to my blog. Glad you liked review of this poetry collection. It's a great collection to have in your library.

Wow, sounds like quite the read! Thanks for such a thorough review.

I love poetry. TS Eliot, ee cummings, and Carolanne Duffy are among my favourites.

TS Eliot and ee cummings, Yes! Me too. I haven't read Carolanne Duffy. I'll have to look for her.