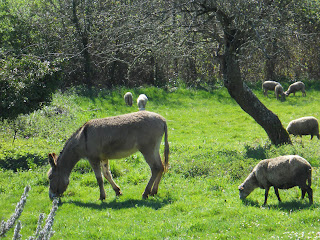 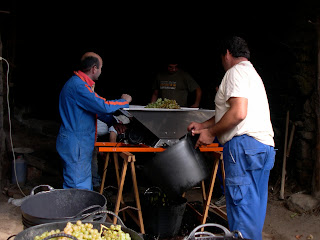 The Campaign and a cold have bumped my blogging a little on this trip. (So many entries, so little time to read them!) It’s been quite a pleasure clicking around, seeing the various takes on Rachael’s challenge. The stories and poems have been truly impressive. (I will never look at any of those challenge words the same way again!) And one good thing about a cold is that it gives you permission to loll around and read books loaned by friends.
Meanwhile, life moves on in Galicia. Our neighbors finished their vendimia (grape harvest) Saturday. It was a two day process, as the grapes have been plentiful this year. Friends and relatives pitch in with one person's harvest, and then it's reciprocal. After Saturday's vendimia, quite a few gathered at the bench at day’s end, pleased to be done with the picking. I could understand some of what they said, but we are learning Castiliano. When our neighbors get together, they lapse into Gallego, a language similar to both Castiliano and Portuguese. I could pick up bits of vocabulary I knew: “grapes”, “yet”, “field”, “town”,  "tractor", etc. But it’s always a pleasure just to listen to the musical rise and fall of their voices, their good-hearted laughter; to watch their mobile expressions, their gesticulations. And they have a way of making you part of the gathering from time to time with a sweeping glance, an arm pat, or by throwing out a question they know you can answer.
This has been one of our warmest trips. (We come in spring and fall.) Evenings and mornings are temperate, when normally they would be quite cool during this season. Days are downright hot. We’ve had to use a floor fan for long periods. There was only one day when we had a bit of rain. And the flies and mosquitoes, alas, are plentiful. I have a fly swatter on a hook in every room, and at night we leave a small lamp on to keep the mosquitos away.
Earlier last week we went with friends to a beautiful coastal town called Baiona, a bay town on the Atlantic coast (farther south than Fisterra, where we went during our spring trip.) Baiona has an interesting “old town” with stone columns supporting walkways under 2nd stories, colorful tiled walls, a stone church full of carved saints, narrow cobbled streets at angles. Cafés overlook the sandy beach and tde wall across the road and the colorful fishing boats beyond. Several islands dot the pale blue waters. On the southern curve of the bay an old castle has been transformed into a parador with a hotel and restaurants. The main building, the part with hotel rooms, looks modern, but there is still the ancient tower and a crenelated wall surrounding gardens lush with red and orange lantana and angel trumpet bushes. It was an all day trip and we finished up with a late dinner at our friends’ house, getting home around 2:00 a.m.
Usually we rise around 6:30 or 7:00 (when it’s still dark then in these parts). But after late nights, we sleep later and are wakened by Miguel’s burra from one of his outbuildings across the lane, hee-hawing for her breakfast. When we first started coming here, Miguel kept his sheep in the building and we would wake to their pitiful bleating. This year he’s moved them to another outbuilding to make room for the donkey. She’s a beautiful creature; deep gray with a black mane, a thin black line down her spine, and a black stripe down each shoulder. And, I must say, a sweet expression on her long face.
Meanwhile, we've been visiting friends and having friends over for Indian food, and a week and a half ago we took in the local fiesta in Toiriz:: I’ll write about that later, as well as another fiesta we are going to in Lugo this Sunday, since fiestas deserve their own posts.
I am sorry to say we haven't downloaded any pictures from this trip yet. The two pictures above are from previous trips, one of the burra, and one of an early stage of our neighbors' winemaking process a couple of years ago, after the grapes were all picked. Meanwhile, today they are all pruning the vines to get ready for next year.
More to come, so stay tuned.  Hasta entonces, and ciao for now.
Posted by Elizabeth Varadan, Author at 7:21 AM

As usual, you paint a beautiful picture.

It's so wonderful to hear about your time in Galicia! I love hearing everything from the grape harvest to animal descriptions. There's something about reading this that makes me want to reread A Year in Provence~ something about the neighbors gathering and the daily life, etc :) I wonder if you've ever considered writing a travel memoir?

I sent you an email to say that I received your book, but didn't hear back. Just wanted to let you know that I'm excited to finish it :)

Thanks, Richard, there is something about this place that inspires the painterly mindset. I've also painted a couple of pictures from my husband's photographs.

Jess, I'm so glad you like the descriptions. I read, and liked A Year in Provence, too. I also read a book about Spain I think you would like: a different part of Spain, called Driving Over Lemons, by a former member of the band, Genesis. I can't remember his name, but the writing is wonderful.
Yes, I got your email about receiving my book. Sorry I didn't mention it, but between visits and a cold an infrequent times at the wifi cafes, time got away. Hope you are enjoying it. Ciao for now.

Hi Elizabeth, Traveling, living the good life and blogging: One of these days, I'm going to be so lucky. I hope to read more about your trip.

In the past couple of weeks, I've been busy with work and haven't been visiting as many blogs as previously.

Enjoyed reading about your time in Galicia.

Idyllic is the word that come readily to mind when you speak of your surroundings. Have a good weekend.

What fun. And you do such a good job of taking of there.

Driving over Lemons is by Chris Stewart, it's a trilogy, if I remember correctly. Loved learning about Gallego, this was new to me. I simplistically thought it was just Casiliano and Catalan... really enjoying your travelogue :)

Gary, Geezer, and Joy, thanks for the good wishes.

Rachna and Donna, glad you are enjoying reading about Galicia.

Joanna, thanks for the name. I heard he wrote a follow up book, I didn't realize two. He's such a good writer. I loved the first one.

I am glad you're enjoying your holiday, and I hope your cold is getting better.

I'm finally catching up on my reading. What a lovely way to start that process. Sounds heavenly.