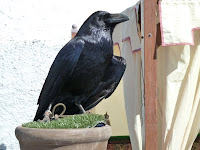 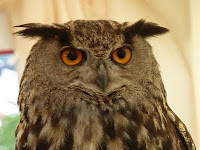 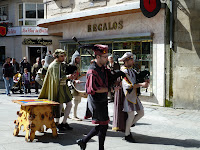 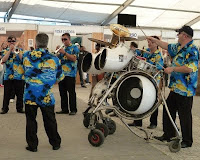 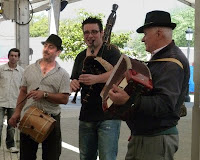 The day before we went to the coast, April 16, we drove to the Sober wine festival. Our friends, Craig and Melanie, put us on to this festival last April, and we enjoyed it so much, we had to go again this year. Wine merchants from all the wineries of Ribeira Sacra, a famous wine region in Galicia, set up stalls, offering wine tastings and selling their wine all day long, accompanied by music. It’s billed as the Feira do Vino (Gallegan for “wine fair”).

Spaniards love to dance, and, oh, how they can dance! When we arrived, the kiosks were arranged in a large L in the plaza in front of the Sober concello; in the center, a local gaitero band was playing. A gaitero is the Gallegan version of the bagpipe. In this band, there were actually two gaiteros, an accordion, a concertina, 2 drums, and three tambourines. People sang to the music, and several had different kinds of traditional wooden clackers to keep the beat -- one of them a string of castanets -- while others simply clapped their hands. And while they sang, they danced: They danced in couples. They danced alone. Some simply danced in place, their feet moving independently to the beat, while they talked, or clapped, or sipped their wine. In some cases they even danced over to a kiosk and back for a fresh glass of wine.

After the gaitero band finished, an all male brass band played -- two trumpets, a tuba, 2 sets of drums, and for some reason, four saxophones. The players, surprisingly, all wore blue and yellow Hawaiian-print shirts and black pants. But they played with Spanish gusto, a peppy oompah-pah in some mixture of cha-cha or mambo beat that had everybody dancing again.

At little before six o’clock, an orchestra set up. At first we thought it might be a youth orchestra, there were so many young people in it, all smartly dressed -- the young women in black stylish dresses and the young men in suits and ties. But there were also young pre-teen players, and a couple of older men who might be grandfathers. We learned this was the Sober orchestra or band, probably sponsored by the Concello of Sober. They were heavy on brass and reeds and tympani and there weren’t many strings, but they had a fine sound, playing popular American ballads from the fifties and sixties (including “My Way”). There was no dancing, then, only attentive listening from proud relatives and friends.

Still, as we left, we saw the huge stage/trailer being set up for Leticia -- one of the bands that played for the fiesta in Toiriz last September -- a sure sign that the dancing would commence again later, and probably continue through the night.

Last Saturday, the day before Easter Sunday, was the Feira Medieval in Monforte. This was our third time going to it, and this time we went with our friends David and Terri. Each year it is slightly different. Like Medieval fairs in the US, people dress up in Medieval garb. But here they stage all kinds of happenings. (Last year there was a drama and sword fight in the streets. This year a man dressed like a satyr, with goat feet and pointed ears, wove in and out of the crowd, bleating everywhere he went).

Every year musicians in Medieval garb parade through booth-lined streets that wind below the towering Parador. There is usually an archery contest, or individduals shoot arrows for prizes. And every year in the Plaza next to the St. Anthony church, birds of prey are on display. (I saw my first raven, which gave added clout in my imagination to Poe’s spooky poem.) My husband loves this exhibit, and snaps as many pictures of hawks, falcons, and horned owls as he does of the people.) At stalls, people in Medieval dress sell herbal remedies, honeys, liqueurs, pulpo, meat savories, breads, sweets, as well as handcrafted jewelry and traditional pottery. We spent about three hours taking it all in, then went to lunch, and then home.

Later, we met our friends again at the Torre Vilarino for a special dinner the owner puts on each year the evening before Easter Sunday. Two men with guitars played and sang (beautifully, I must say) while everyone ate their dinner. Tables were full, with parties of four, six, even ten. Our table shared a wonderful meal of vegetarian paella (with bits of seafood in addition to the vegetables), gambas al ajillo (small shrimp in olive oil that has been steeped with garlic and red pepper), and chiparones (small, tender slices of calamari, cooked without batter).

The guitarists wound up their program and left. Most diners had finished their meals by then. A few customers left. A few more came in. The wine flowed. One of the hosts who doubles as waiter, master of ceremonies on bingo nights, and master of downloaded music as well, took his post at the amplifier on the small corner stage. Familiar music crept into the restaurant -- favorite songs by a variety of bands. Feet started twitching under tables. An unspoken signal went out, and customers and wait staff alike got up and moved the tables to the periphery, clearing the center floor. The proprietress came dancing into the dining area, along with one of the waitresses, and soon everyone was dancing..., dancing..., dancing!

We had to give up at about two-thirty a.m., but the dancing continued long after we left. If you are every in the area, Torre Vilarino should be one of your major stops for (literally) a night out. You can learn more about them at their website: Torre Vilarino .

Meanwhile, Baile! -- It’s probably the secret of longevity so typical in Spain.

Posted by Elizabeth Varadan, Author at 4:38 AM

You are definitely making me miss my own days in Spain - a very long, long time ago.

I love to bailar!

How wonderful! Your posts are making me feel like I'm there :)

Lovely. It must be hard to think of coming home so soon. Enjoy your last days there.

Good posts. Good photos. I like Medieval fairs myself.

Such fun you must have had!

Great pictures and a good post. Makes me feel I am with you in Spain enjoying everything. :)

Yes, it was all great. I can't believe how the time went by. Hubby and I are in a hotel room now in Santiago, since we have to catch our plane so early in the morning, and show up at the airport even earlier.

Ah, I'm going to miss it so. And miss our friends and neighbors. People here get such a hold on the heart!

What an amazing trip! I did wonder about the "sober" wine fest, but it sounds great! The dancing sounds amazing! Safe travels!

HI, Lauri, yes, that does look funny, doesn't it! It's pronounced "soh-bair", which makes it SOUND normal. :-)