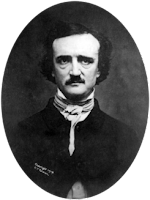 In response to a February 28th post on Carrie Keeps Typing , according to The Illinois Libary Project of 1941, March is the month to read the books you've always meant to read. So Carrie suggested readers pick a book they've always meant to read and read it this month. I actually picked an author: Edgar Allan Poe. I have a slender volume of his stories, Tales of Mystery and Terror (including The Fall of the House of Usher0, and a slender volume of his poems, The Raven and Other Favorite Poems.
So far I've read four of the stories and am halfway through the fifth, and I would love to say I'm enthralled and on the edge of my seat and left astounded by horror at the end of these tales. But, I'm not. He certainly can induce an atmosphere of foreboding and unease -- pages and pages of it. But then the story leaps to its conclusion and... that's it. I can't help feeling let down.
Take the Usher story: a family curse that the victim dreads... and dreads. He recounts the curse to his visiting friend, who, seeing Usher's devastated condition and learning of the curse, feels unease... and more unease. More dread and unease. More atmosphere. And then, BAM! The curse is fulfilled, the last of the family dies, the friend flees -- and just in time, too, because the house falls to pieces, and the fragments are sucked into the deeps of the tarn.
Was this surprising? Only the last little details. Do we know who cursed this family and why? Nope. I have query letters on my brain right now, and a side question that immediately pops into my mind is, "How would Poe sum up the plot in a query letter?" (See my challenge in red at the bottom of this post.)
So far, the other stories follow a similar pattern: Ominous atmospheric description (if you don't mind rereading a few paragraphs more than once to be sure you really understood what has taken place), a terrible sense of dread on the part of the narrator, finally a horrendous catastrophe that you've been warned was coming via numerous foreshadowings -- and that's it: end of the story. No denouement. No changed narrator. No conclusions to be drawn about the meaning of it all. Just disaster predicted, disaster delivered. Often the tale is told via a "device", as a message in a bottle, or a book lying handily near the narrator, describing the story behind a painting, etc.
I'm presently halfway through a fifth story: A Descent into the Maelström. It's a longer story, and so far I'm hanging in there. The narrator has followed a guide up a steep cliff to look over island-studded waters that are so affected by deep rocks that periodically a deady vortex wrecks ships and destroys unfortunate swimmers. The guide is one who lived to tell the tale. As usual, the aura of doom is wonderfully drawn. I'm at the place where the guide's boat has been sucked into the vortex, and I am pushing on to find out why he's still alive. I will have to report on this story in some future post.
Likewise the poems.
But for now, back to The Fall of the House of Usher. This story is a classic, a famous one. Even though I'd never read it, I knew of it. And, having read it, for other readers who are so motivated to go get a copy and read it, I would like to know:
How would you query this story to an agent or publisher? What would you put in your first paragraph? Let me know. I am eager to see replies.
Meanwhile, mosey on over to Carrie's blog, because she has another funny post to ponder.
Posted by Elizabeth Varadan, Author at 5:11 PM

Have not read Edgar Allan Poe, will try to read it. Thanks for alerting us to Carrie's blog.

Didn't know about the March challenge, but did read "Heart of Darkness" this month -- a book I've long felt guilty about not having read. As for Poe, I'm a huge fan. His writing seems excessive & predictable to us -- all those adjectives! all that gloom! But he was really a pioneer of horror & mystery, and what he did has now become so commonplace as to feel cliched. I think the letdown you're feeling may in part be because of that. I teach "Usher" in my undergrad English lit & composition class, and some of the things we look at are his personification of the house & then the way the Ushers & their dwelling become conflated with each other. Also: Is it really just the fulfillment of an old curse that the narrator "happens" to witness? Or does that narrator in fact imagine -- or perhaps even *cause* -- the events in the story? And then there are all the weird incestuous innuendos between Roderick & Madeline. It's over-the-top, but I think delicious good fun.

Interesting thoughts. It is sometimes hard to get into books written for different times, eras. We evolved, not just as writers but as readers.
We call them classics, what will future generations call our work? Weird? Dated? Crap? You got me thinking.
Look out.

You raise a good point about the "cliche" aspect. And I do think he's a master of atmosphere and suggestion and innuendo. I am enjoying finally reading these, since they are classics, and I know Poe is considered the father of the short story. (I think I know that. :-) )
In the case of Usher, though, is it really a story or a literarily written "event" or long, drawn out anecdote? It's almost like a campfire story where the teller shrieks at the end and sends all the listeners scattering. I've probably had it drummed into me too much: "beginning-middle-end" "arc" "denouement" "dimensional characters" etc., etc. He's a master of setting and staging, but all the mysteries remain mysteries, and the story as it happened still remains a horrible event the narrator witnessed. I like discussions like this by the way, so I'd love your follow up comments.

Hi, Tanya, thanks for following me. I wonder that, too. Will the book we read today (the award winners, etc.) be considered "classics" 100 years from now?

No question much of what was written over a hundred years ago has formed the cliches of today, and that makes it hard for us as writers to read them. We've been trained to avoid them. I hope what I write today will become the cliches of the future. That will mean many have read and absorbed what I've written.

My favorite of Poe's stories is Hop Frog. It is a real horror story and the character of Hop Frog has stayed with me all these years. He was, in some ways, the inspiration for one of my characters in my second novel. Poe certainly made an impression on me.

Thanks for the mention, Elizabeth! I haven't read 'The House of Usher' for awhile but I taught 'The Tell-Tale Heart' to groups of tenth graders for a few years. It still has the power to scare! How would Poe query that one...?

"Our narrator doesn't have a name, but he does have a very big problem: he bludgeoned his employer to death and buried him under the floor..."

That's great, Rosi. Yeah, I hope what I write will one day be a cliche, too! I just read Hop Frog last night, and to me, it was the best example of a true story so far in the collection that I have. It had all the elements I mentioned above.

Carrie, I love your query for The Tell-Tale Heart. You're right about the scariness of that story. I remember my brother read it when we were teens and he loved horror stories and retold it to me, so that I was scared witless. :-)