An Interview With Linda Joy Singleton 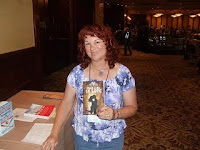 Linda Joy Singleton is the author of several popular YA and MG series, among them, Strange Encounters, The Seer, Dead Girl Walking, and Regeneration. Regeneration was a Young Adult Library Association Quick-Pick Choice in 2001. Twin Again won an Eppie Award for best children’s book in 2003. Here’s Linda to talk about her books and her writing process.

1. You have had several series published and have developed a loyal fan base. I’ve read several reviews, and regularly your fans clamor for the next book. Do they affect your choice of the next adventure?

Yes. I definitely listen to my fans. When THE SEER was just starting, fans kept telling me they wanted Sabine to find romance with Dominic. So I gradually added more in each book. A lot of my decisions for a new book are editorially driven. For instance, I’ve written one book about Thorn and think I have a good chance of being offered a contract for one more, so I recently pitched another Thorn book to my editor. Fingers crossed good news comes soon.

2. Your series usually deal with magic creatures, ghosts, extrasensory perception, or extraterrestrials. Have you always been interested in the paranormal? What inspired your interest?

I’ve always been interested in paranormal topics. Psychics especially intrigued me even when I was young because they seemed to offer evidence of contact with the Other Side. While I have never seen a ghost or had any woo-woo experience, I get strong intuitive feelings that I’ve learned to listen to. One of the first authors to inspire my interest in the supernatural was Lois Duncan; her YA mysteries plus a crime chiller called WHO KILLED MY DAUGHTER, based on a personal tragedy. I’ve been to psychics a lot; in fact, I plan to go to one next month. The last time I went to a psychic he predicted a TV sale and my series on a bestseller list. I’m hoping!

3. Each of your series has a different kind of protagonist. How do you know when it’s time to end one series and begin another?

With most of my series, I wanted to keep writing more books but the publisher made the decision to end the series. When REGENERATION ended at 5 books, I was so disappointed that I wrote one more book just for fans which is still available for free on www.ljsingleton.com . I never wanted THE SEER series to end. Until 1 ½ ago THE SEER was going to end with 5 books. I was thrilled when I was asked to write one more. My publisher felt a spin-off with Thorn would be a better choice since it will be a new character and situation. That book (tentative title GRAVE SECRETS) comes out in 2011.

4. Your books are mainly for teens or tweens. Have you ever thought of writing picture books or books for early readers?

I have a picture book about dogs that my agent is submitting. I am totally in love with this picture book and want it to sell very, very, very much! I’ve tried writing early readers but didn’t have the voice for it. I seem to have the most success with YA series and I’m happy to keep writing them.

5. Writers are often advised to carry a notebook with them at all times to “catch ideas”. Do you do that?

I usually have some paper in my purse, but I’ve written notes on napkins and the back of any papers I can find. I’ve even scribbled notes on my hands. I recently got an I-Phone with a notebook app that I love.

6. How do your series ideas come to you? A phrase? A problem? A new character?

Mostly I think of a set-up that intrigues me. I like situations where someone’s life takes a new twist, usually with paranormal elements. I’ve written quite a few books that didn’t sell and several of them don’t have paranormal. The idea for SEER and DEAD GIRL started in manuscripts earlier in my career that I’d submit then set aside then rework and submit again. The first character of THE SEER was a completely different girl than Sabine, and I called the series PSYCHIC SLEUTH. DEAD GIRL was originally a single-title book with a different ending titled TURN LEFT AT THE MILKY WAY. But when I switched the title to DEAD GIRL WALKING, my editor showed interest and suggested turning it into a series. I loved the idea and had a great time writing those books.

7. Do you do a first draft in longhand or on the computer, and why? If the former, when do you switch to the computer?

I write on the computer. I taught myself to type when I was 11 and have always loved the speed and rhythm of a keyboard; my form of musical instrument. I usually take notes in long-hand to get started but then I jump into the book on the computer. I edit as I go along so don’t really have a first draft but more of an evolved draft.

8. Who reads your manuscripts first? Your husband? A writing friend? Your agent or editor?

Definitely NOT my husband since he’s not a reader but he’s really smart and if I need some feedback, he’ll give me advice. I’m in a critique group that meets twice a month and they hear my work first. When I finish the book, then it goes to my agent who will forward it to my editor. Sometimes I send a new book to a friend online, like I recently did with SEER #6 to a librarian friend.

9. What is the best advice you have ever gotten from an agent? An editor? Another writer?

I’ve heard all flavors of advice and mostly it comes down to listening to my own gut feelings. Usually I’m telling myself to keep writing even though my book feels like garbage. I’ve learned that I can finish a book and I’ve learned how to deal with disappointments and success. Mostly the advice I give myself is to just keep growing as a writer and working hard. Never to give up.

10. Do you have a new series on the back burner?

There’s a science fiction YA that my agent has shopped around but it hasn’t sold. I’m planning another Thorn book if my editor wants one. I’m not really sure what’s next. I can’t wait to find out.
Thanks, Linda for sharing your thoughts with us.
For more information, visit Linda's website at http://www.lindajoysingleton.com/ and http://www.myspace.com/lindajoysingleton . New books coming out: THE SEER #6 MAGICIAN'S MUSE Fall 2010, and GRAVE SECRETS - A Thorn Goth Girl Mystery, 2011 (Flux/Llewellyn Publishing )
Posted by Elizabeth Varadan, Author at 5:56 AM

Great interview Elizabeth! Its always nice to know how other writers get inspiration for their series especially the paranormal ones. Must try to get one of Linda's books.

Oh you should definitely try them Rachna. They are really good. I'm a teacher and I can tell you that my kids eat those up! :)